By Catharine Welch in Pearson’s

JACKOS are the common heritage of childish humanity. Everyone of us has, in the days of his youth, owned and cherished a Jacko, and found its long, lank body, clad in parti-colored fur and its soulless squeak, a satisfactory household substitute for the monkey at the Zoo.

Probably of all the countless Jackos in the world, the best beloved was the black and white specimen possessed by Edytha. Her Jacko was so dear to her that half his fur had been worn off by her ecstasies of affection, and of his once long and sweeping tail there remained but a melancholy stub, while the squeak had long ago departed for good and all, and no amount of insinuating pokes would persuade him to utter the slightest sound.

All these defects, however, only added to Edytha’s love for him. He was her dearest, perhaps her only friend ; though this was due, not so much to Jacko’s attractions as to the absence of other material from which friends could be made.

Of course, there was dada, but he was visible no offener than once a week, and then for only a few minutes at a time. There was also mamma, who attired like a pictured princess in a fairy-book, made daily formal calls at the nursery. And there was nurse ; but nurse, Edytha’s aristocratic feelings told her, was only nurse after all, so it is not to be wondered at that, of them all, Jacko proved the only congenial friend.

There were some things, however, that Jacko could not do. One of them was to answer questions. Neither honeyed appeals nor the most persistent shakings would induce him to tell where the rain came from nor what made the birds fly, nor to reply to any other of the queries that tormented his small mistress every time she looked out of the window.

One thing in particular troubled

her just now. Somewhere or other she had come across a word of tantalizing interest.

Nurse knew nothing about it, but had no intention of making such a humiliating confession.

“Goodness me, Miss Edytha, you’d not understand if I told you.”

“Oh, yes, I should,” replied the child with conviction. “Tell me, anyhow.”

“I’ll do nothing of the sort. It’s not for little girls like you to know.”

That afternoon dada paid one of his rare and fleeting visits to the nursery.

“Great Scott !” he cried, with a roar of laughter that almost shook the child off his knee.

“What is it?” she repeated.

“Well, my dear,” said he, “I don’t know much about it myself, but I think it’s a notion some folk have that we were all monkeys once.”

“That’s it,” replied dada, charmed at the ease with which he had explained a difficult subject, “monkeys like Jacko.”

“Whew !” dada whistled, “is it four o’clock already? I must run. Goodbye, youngster.”

A hurried kiss, and he was off, and Edytha alone faced a mighty problem.

Seated in a small and demure heap on the floor she held Jacko in her arms, as was her habit at times of great mental stress, and addressed him seriously.

what dada said, that we were all monkeys like you once?”

With wrinkled brow she paused a moment in silent thought.

“I suppose I was a monkey once, myself,” she said at last.

The idea was rather too tremendous to take in all in a minute, but, gradually, she assimilated it. Suddenly she jumped to her feet excitedly, and held the monkey out at arm’s length.

“Jacko!” she cried, shaking him back and forth in her excitement. “Jacko ! If I was a monkey once, why then some time you may turn into a little baby !”

She marched up and down the nursery in her agitation. The idea took hold of her with a mighty fascination—to have instead of Jacko a little child who would play with her and be her friend like Jacko, and, rising to heights that Jacko could not reach, would be able to talk to her, and perhaps to answer her questions !

Her brain was on fire, she started to run and ask nurse’s advice as how to bring about this miracle. Half way to the door she paused.

Had not nurse said that this delightful subject of evolution was no fit one for a child? Had not nurse been disapproving and discouraging when even she had broached it to her? Would not nurse be likely, instead of helping, to throw difficulties in her way?

All these questions she answered with a disheartening Wes.”

Where, then, should she turn for sympathy and advice? Ah, where?

Edytha decided that if this glorious idea was to be put into effect, she must not hope for outside help. Unaided and unadvised she must work with Jacko toward this marvellous end.

“Jacko,” said she, clasping the toy to her breast affectionately, “you will try, won’t you? You’ll turn into a child if you can, won’t you, dear?” And, in the dimness of the early twilight, it seemed that Jacko nodded,

Just then there flashed into her mind memories of a conversation she had held with nurse some months before : “Where did I come from in the beginning?” she had asked.

“From the top drawer of your mother’s dressing-table,” nurse replied? “I found you there one morning, when you were a little baby.”

Edytha did not hesitate. With Jacko held fondly in her arms, close against her little heart beating fast with excitement, she tip-toed along the hall, down the stairs and into her mother’s dressing room. Softly she moved across the dimly-lighted room* and pulled open the top drawer of the dressing table, and there, in a bed of sweet-scented laces and ribbons, she laid Jacko.

And then, softly, she crept back to the nursery.

Four days passed slowly by, and then one afternoon at the nursery door Edytha saw nurse standing, with a something in the set of her head and the look of her eye that proclaimed she had great news to tell. In her arms was a tiny white bundle, held tenderly, and as Edytha looked at it, it seemed as if her heart would stop beating in the clutch of a great hope.

Nurse put your finger across her lips.

“Hush!” she whispered. “You’ll wake him. It’s your little new brother that came this morning.”

“Nurse,” she questioned, “where did you find him?”

Lumbering and slow of invention, nurse fell back on the old reply. With a chuckle, she answered :

“In the top drawer of your mother’s dressing table. Miss Edytha.” 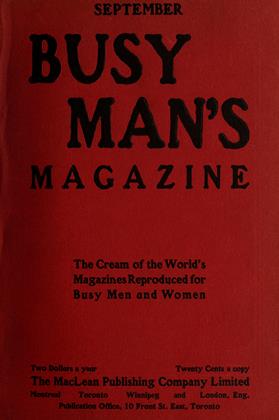