WOMEN members of the medical profession have certainly not scored the success which their abilities entitle them to expect, declares a writer in the London Daily Mail, who perhaps for reasons connected with “safety first,” merely signs the article as being written by “A Barrister-at-law.” Women pass the examinations brilliantly, he admits, but they fall down in practice andi many of them fail to earn even a moderate income. “I know seven women; doctors,” he adds, “every one of them more learned and capable in her profession than the average male practitioner of my acquaintance.” Yet one of the bright£50 a year—the equivalent of about est of these three has failed to earn $250 in Canadian money. So hard' up was she that “for a considerable period her staple diet consisted of bread and butter and weak tea.”

Women’s fortune at the bar is even worse. “In England where she is stall in the student age,” he writes, “she has justified herself in her examinations as she has done in all subjects at the universities. When it comes to practice she is foredoomed to failure.

“Why is this? It is not, or at any rate it is not mainly, because a man can endure prolonged stress and the strain of which woman is incapable. In any profession.a puny man has an enormous advantage over the strong and vigorous woman. The prime cause of her failure is the fact that she is obviously a woman. If she could disguise her sex and put on the outward semb.ance of a man she would double her success. The only remedy seems to lie in effective disguise; a fact recognized by many serious women waiters who, in order that their work shall be appraised at its true value, adopt a masculine nom de plume.” 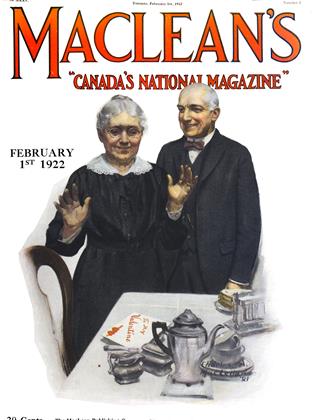