Most foreign diplomats or heads of state who visit Ottawa are presented with a piece of Inuit sculpture as a gift. And when a Canadian prime minister or premier travels abroad, he almost invariably presses upon his hosts a few pounds of soapstone whales, seals or geese. Queen Elizabeth II and Prince Philip own several Inuit carvings. But the boom that has emerged from Inuit sculpture’s arrival as the paramount Canadian art form has produced problems for both craftsmen and customers. The Inuit Tapirisat of Canada’s lawyer, Marc Denhez, estimated last week that more than a million pieces of fake Inuit art are now lining Canadian store shelves. The Tapirisat, which represents the interests of Canada’s 25,000 Inuit, will likely lobby the federal cabinet for tough government labelling regulations to protect the $7-million-a-year legitimate industry.

Bogus Inuit art has been sold in Can¡ ada since what was then called “Eskimo” sculpture was introduced to southern markets about 25 years ago, and the Inuit feel it has cheapened their work. Denhez, author of a study on the subject of imitation Inuit art, says that an Inuit piece is a “fake” when it emulates the “Inuit style” but is not produced by an Inuit. Imitations range from costly hand-crafted carvings to $1.49 plastic polar bears, produced by the thousands from a mould.

Governments have grappled with the problem but so far have met with only partial success. Shortly after imitations began to flood the market, appearing in cigar stores and airport gift shops across Canada, the federal government responded by introducing the “Igloo Tag” of authenticity. It indicated to the customer that he was indeed purchasing an original Inuit carving. But despite efforts to promote the label, the “typical Canadian, let alone the tourist, does not look for it,” said Denhez. As well, the program does nothing to regulate non-Inuit artists whose tags can “convey their own impression of authenticity,” he added. For his part, Michael Casey, general manager of Canadian Arctic Producers, the Inuit-owned national marketing agency, said, “An uneducated consumer may not be readily able to discern the difference.”

North or claim to be “Inuit-inspired.” Some producers have assumed exoticsounding names, such as Dimu and Wolf. Others are more blatant, such as Siku and Anana, which are Inuktitut words for ice and mother respectively. Some carvings are etched with a primitive-looking scrawl, creating the impression that the work is an original signed by the author. Denhez suggests that regulations could be enacted through the National Trade Mark and True Labelling Act so that work not produced by an Inuit would be clearly marked “Imitation Inuit Art.” New identification could state the artist’s real name, where the product was produced and if any mass-production techniques were used. For the long term, Denhez recommends changes in the current Copyright Act, which now protects individual works but does not guard against imitations of style.

One of the most successful Inuit art emulators is Quebec sculptor Mark Parkinson, who, with his son, Ross, also a carver, makes no attempt to camouflage his nonnative identity. A Parkinson sculpture was presented to Queen Elizabeth in 1977, to mark her Silver Jubilee. Parkinson’s sales agent, Sara Shabsove, says clamping down on the mass producers is a logical step, but preventing the creation of individual pieces in the Inuit style is going too far. “Why should a man who is Canadian and has a lot of talent be discriminated against because he is not an Eskimo? The Inuit should not have a monopoly on soapstone carving,” said Shabsove. Perhaps not. But up in Cape Dorset, N.W.T., Inuit carver James Manning flatly declares that reproduction of Inuit works should cease. “Some white people could be easily fooled,” he said. “A fake carving of my carving is not right.” 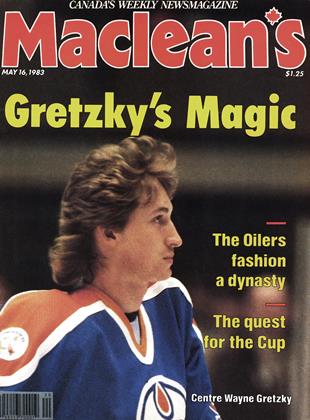