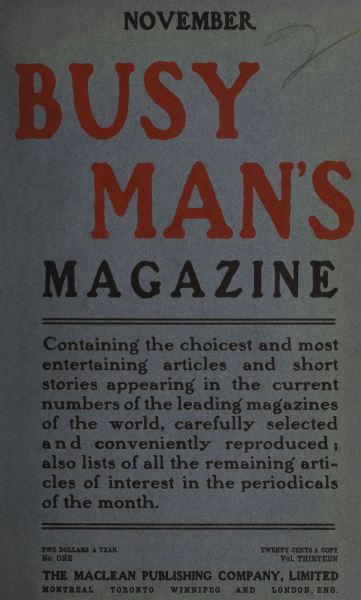 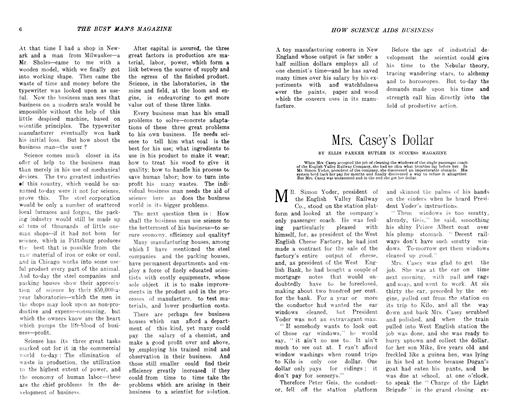 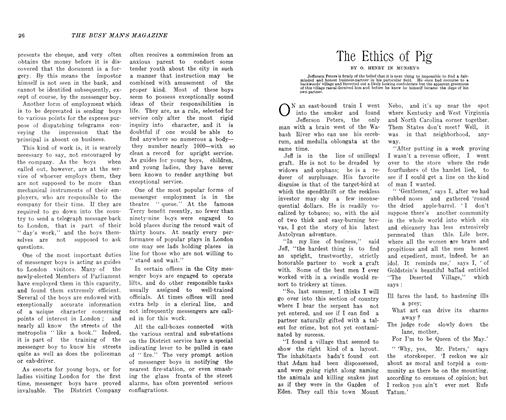 The Ethics of Pig 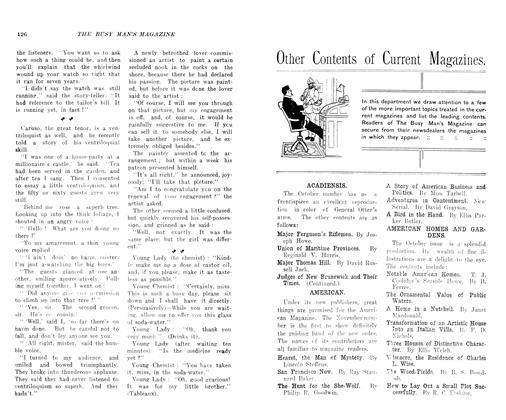 The Ethics of Pig

ON an east-bound train I went into the smoker and found Jefferson Peters, the only man with a brain west of the Wabash River who can use his cerebrum, and medulla oblongata at the same time. Jeff is in the line of unillegal graft. He is not to be dreaded by widows and orphans; he is a reducer of surplusage.

(The October number has as a frontispiece an excellent reproduction in color of General Otter's arms. The other contents are as follows : Major Ferguson’s Riflemen. By Joseph Howe. Union of Maritime Provinces. By Reginald V. Harris. Major Thomas Hill.

CHARLES E. HUGHES was born at Glens Falls, N.Y., on April 11, 1862, the son of a Baptist minister, David Charles Hughes. His grandfather on his father’s side was identified with the founding of the American Bible Society in London, and an uncle, Richard Hughes, was a popular preacher in North Wales. By SUN MAGAZINE14 min

WHEN in doubt ring for a messenger boy,” is the advice of a well-known actor manager. It is a good rule; for there is scarcely an emergency to which the modern Mercury is unequal. In fact, the capabilities of the call-box are well-nigh inexhaustible. By W. B. NORTHROP14 min

The Business Mayor of Scranton

THE mayor of the City of Scranton, in the State of Pennsylvania, a few weeks after his election, took the twelve o’clock express for New York. The porter, an old acquaintance, ushered him to his place in the parlor car with his accustomed greeting : By HAROLD J. HOWLAND13 min

7273
ARTICLES FOR THE WORKERS

An English Mechanic in America

THERE has been a long controversy about the comparative industrial efficiency of England and the United States. Probably no one is better qualified to compare the merits of one country with another than one whose lot it has been to rough it in both. By JAMES BLOUNT13 min

Mr. Dooley on the Power of the Press

A FEW years ago,” said Mr. Dooley, “I thought that if I had a son I'd make a lawyer iv him. It was th’ fine profission. Th’ lawyers toot' all th’ money an’ held down all th’ jobs. A lawyer got ye into throuble be makin’ th’ laws an’ got ye out iv throuble be bustin’ thim. By F. P. DUNNE13 min

MR. SAMUEL PARSLOW, with many sighs and grunts, settled his huge carcase in the cushions of a first-class smoker. A worrying day in the city had not improved his temper, and he looked forward to an hour of quiet seclusion on his homeward journey. By FRED JAY12 min

FIVE men about a long table— a president and four managers of departments—govern the city of Galveston, Texas. This board is now five years old. It is probably the most direct and simple city government in the world. More than that: it is a revolution in local government in America; for it is organized on entirely new lines— the lines of a business corporation. By GEORGE KIBBE TURNER12 min
October 11906