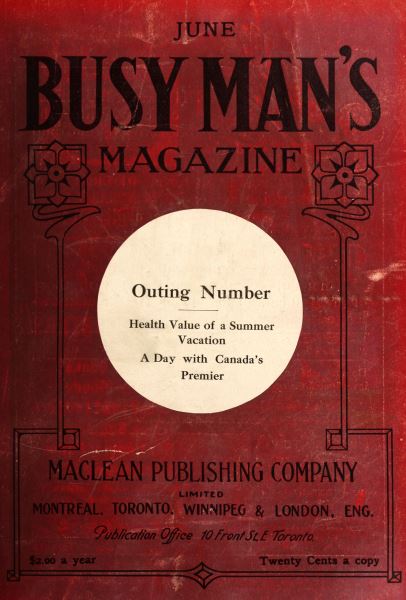 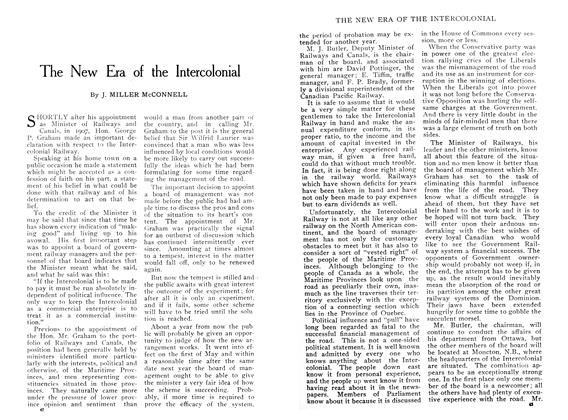 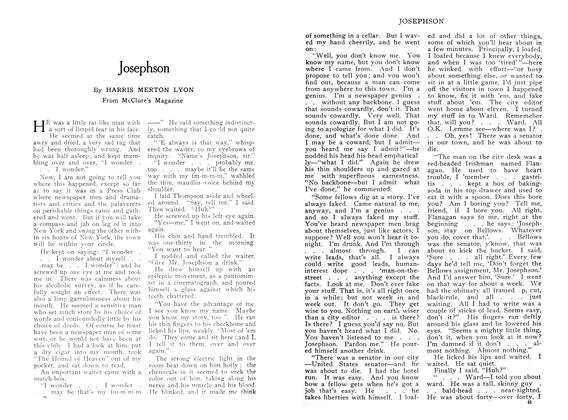 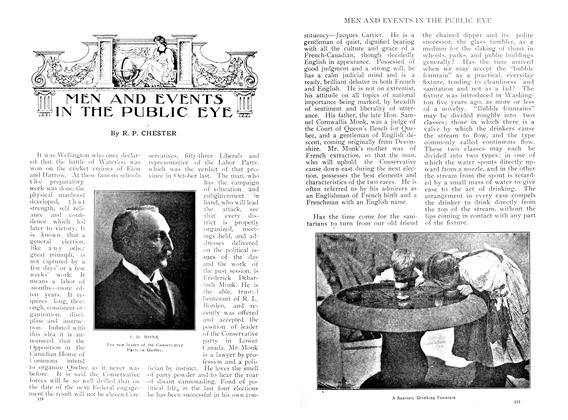 SHORTLY after his appointment as Minister of Railways and Canals, in 1907, Hon. George P. Graham made an important declaration with respect to the Intercolonial Railway. Speaking at his home town on a public occasion he made a statement which might be accepted as a confession of faith on his part, a statement of his belief in what could be done with that railway and of his determination to act on that belief. By J. MILLER McCONNELL22 min

HE was a little rat-like man with a sort of limpid fear in his face. He seemed at the same time awry and dried, a very sad rag that had been thoroughly wrung. And he was half asleep; and kept mumbling over and over, “I wonder... I wonder.” Now, I am not going to tell you where this happened, except so far as to say it was in a Press Club where newspaper men and dramatists and critics and the palaverers on perishable things came and gathered and went.

It was Wellington who once declared that the battle of Waterloo was won on the cricket creases of Eton and Harrow. At these famous schools the preparatory work was done, the physical manhood developed, that strength, self reliance and confidence which led later to victory. By R. P. CHESTER10 min

The Work of Wives

A DECISION lately made in the General Sessions Court in New York City has raised the question, Are wives supported by their husbands? A man brought into court on a complaint of having abandoned his wife because, as he said, he could not support a household on his earnings of six dollars a week, was discharged by the judge, who concluded his decision with the admonition, “Let the wife go to work for her living. By F. M. THOMPSON9 min

A Day With Canada's Premier

THE easiest public man in Canada to see and the most difficult to interview. This is the opinion of visitors to the Capital of the Dominion. If their mission is a legitimate one they do not have to go through any formalities or red tape procedure to obtain an audience with the Premier, but the foreign, or even local newspaper, correspondent, who thinks that he will find bright, readable copy by inducing him to talk on some national or fiscal question, will come away disappointed. By G. B. VAN BLARICOM14 min

The HEALTH VALUE of a SUMMER VACATION

DO you need a summer vacation? Perhaps you think that you can get along just as well without one—and you may for a year or two. You can do without surfefficient sleep or the requisite amount of food for a short time without peracceptable harm, but a day of wreckboning comes. By JAMES W. BARTON9 min

IT was the first time in an acquaintanceship dating from the days when they both wore pinafores and made mud pies together that Mrs. Jack Deming had ever seen Jimmy Farraday in the least embarrassed or ill at ease. Now he was both. He sat on the edge of his chair and nervously fingered the paper-wrapped package laid across his knees. By UNA HUDSON12 min

The Regeneration of Palestine

THE population of Jerusalem is now estimated at 80,000, about two-thirds of whom live outside the walls in a new city, the oldest house in which does not date back more than a quarter of a century. So rapid is the growth of the city that visitors who were previously in the country only a couple of years ago are astonished at the vast changes By ALBERT M. HYAMSON9 min

THE ILLUSTRATOR OF DRUMMOND'S HABITANT BOOKS

"CANADA has no artists,” so said Sarah Bernhardt. It is always painful to flatly contradict a lady, but in this instance, it must be done. Canada is yet young. Her men have been busy, blazing the trails for future progress, and developing the most obvious resources of the land. By H. A. SOMERVILLE8 min

THE rocking hansom swung the corner from the avenue, rolled along a shabby little cross street and turned finally into one of the narrow, crooked thoroughfares close to the waterfront. It pulled up at length before a decidedly unattractive house, and the man who sat grimly on the cushions pushed open the apron and alighted. By JOHN BARTON OXFORD12 min

ALL human beings have a natural craving for the acted drama. They believe, as did Ben Johnson, that life itself is like a play, and agree with Bulwer Lytton in his observation that “Plays are the mirror of life.” Music and the drama have aroused widespread interest in Canada, for, in her nine provinces, there are 2,000 theatres, concert halls and places of public entertainment. By W. S. MOORE8 min

THE rural resident is getting ready for the summer boarder and the summer boarder in turn is getting ready for the rural resident. The latter is mowing the lawn, painting the verandah, trimming the trees, overhauling the boats, putting new seats on the capacious arm chairs and giving the big democrat wagon a fresh coat of varnish. By W. G. FANSHAW11 min