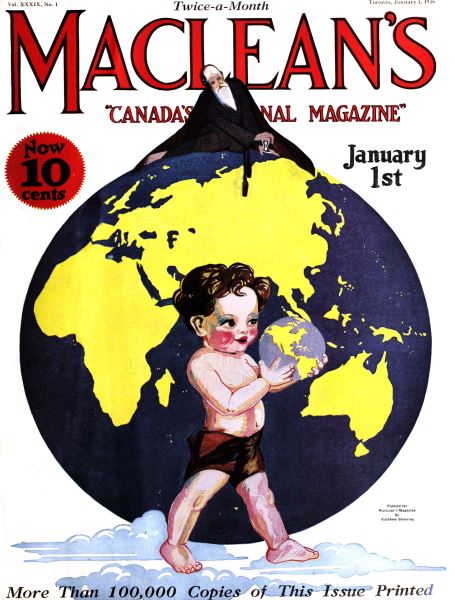 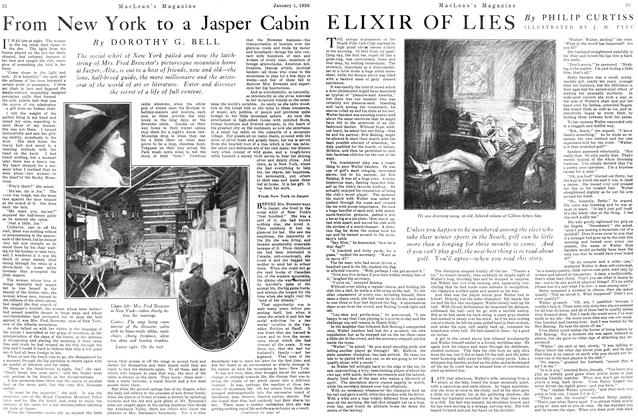 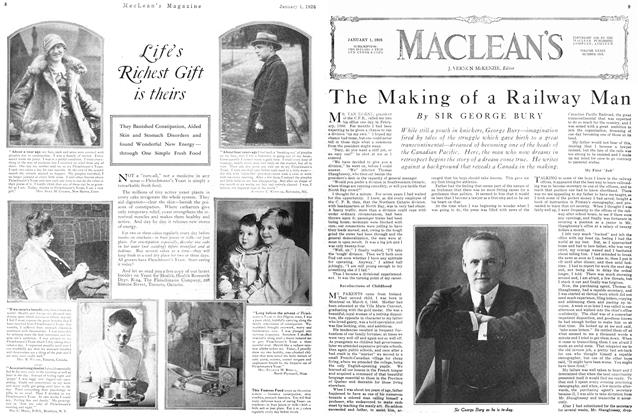 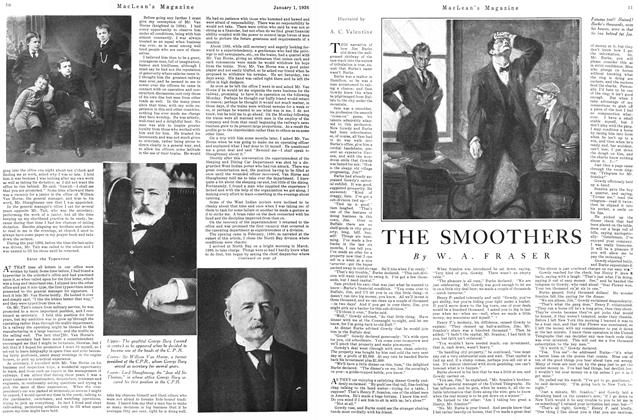 THE annual tournament of the Heath Hills Gclf Club reached its high point about eleven o’clock in the morning. At that hour, on qualifying day, the first tee, roped off like a prize-ring, was surrounded, three and four deep, by waiting contestants.

MR. VAN HCRNE, president of the C.P.R., called me into his office one day in February, 1890. For months I had been expecting to be given a chance to run a division “on my own.” I hoped my chance had come, but one could never tell in those days what a summons from the president might mean.

THIS narrative of how Jim Burke slid down the wellgreased skidway of the race track into the waters of tribulation is true, except that Burke’s name wasn’t Burke. Burke was a realtor in Hamilton, so he was a man accustomed to taking a chance; and Sam Gowdy knew this when he pilgrimaged from Buffalo to the city under the mountain.

WHEN A GIRL'S THIRTY

THE TENTACLES OF EVIL

IAN sat opposite Is’bel eating his breakfast in silence, in the comfortable little dining room over the secondhand bookstore. There had been no quarrel between them; their marriage was a happy one; but still a sense of fear kept continually pulling at his elbow ever since he had realized the gradual encroaching menace of the slums. By BEATRICE REDPATH

IT WAS a home on a hard frontier, bare floor, bare walls, naked rafters. Upon the chimney place, a rifle and a crucifix suspended in strange union; beneath, a text popular in Highland homes, proclaiming in ancient script, “A Stranger is a Sacred Name.” By ARTHUR HUNT CHUTE

BETWEEN seventy and eighty children, at least, now know definitely that Santa Claus does not live at the North Pole. They have had letters, bearing his signature, and carrying the name of the postoffice — Craig Harbor, Canada — definitely stamped on the outside of the envelope, to reassure them of the location inscribed within. By JOHN NELSON

Teaching the Young Canadian How to Sing

DING dong be-11, Pussy’s in the we-11. Who put her i-in . . .” sang a little, chubby-faced girl, as she swung to and fro, up and down, under an old, blossom-laden crab-apple tree, one fine May morning. The tune was either appropriated or “made up” as she confessed, yet her crouched muscles and pointed toes synchronized perfectly with each beat of her song and she sang just as sweetly and with the same simple perfection as her little, feathered rival, pouring his rapturous melody into the air above her. By PANSY ATKINS

From New York to a Jasper Cabin

IT WAS late at night. The woman in the log cabin bent closer to the fire. The light from the flames played on the not too finely chiseled, but cultured, features of her face and caught the rich, warm glow of something she held in her hand. “Come closer to the light and look. By DOROTHY G. BELL

6061
Art and Decoration for Town and Country Homes

THERE have been three lessons taught by the new comprehension of interior decoration as it has progressed during the past ten years. The first is that fundamental wish for simplicity and purity of line; the next, enrichment with color in such possibilities as had never before been dreamed of; and the third, the employment of texture for effect. By ANNE ELIZABETH WILSON
December 151925