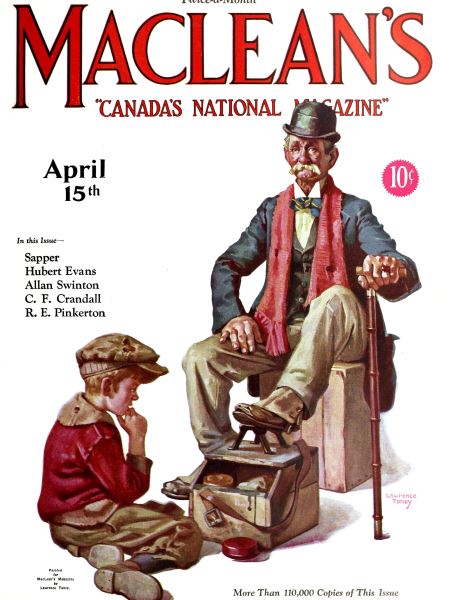 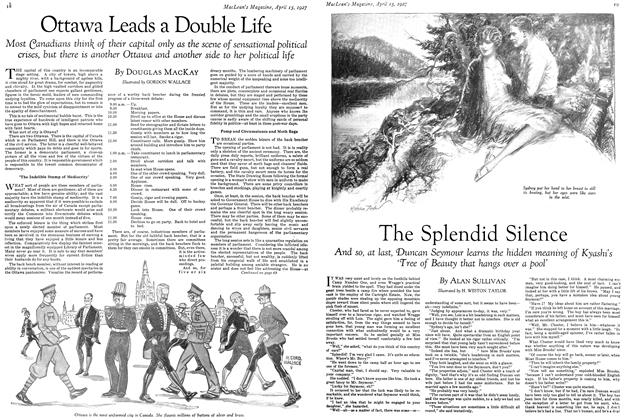 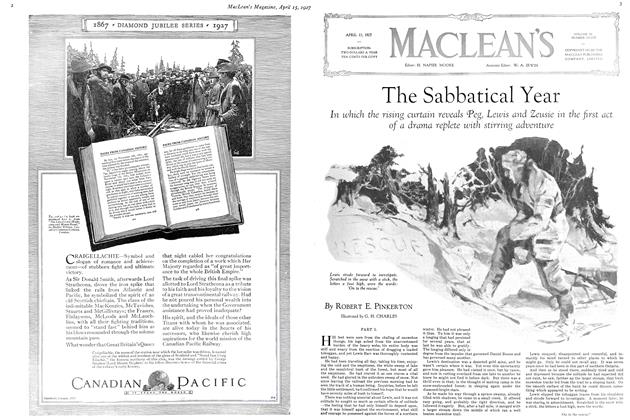 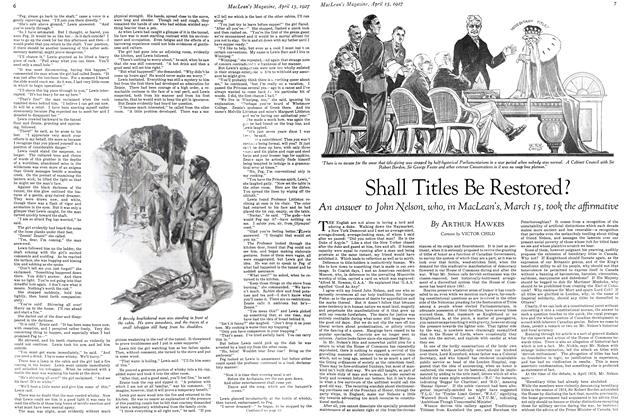 Shall Titles Be Restored?

IT WAS very quiet and lovely on the foothills behind Camp Number One, and even Wragge’s practical brain yielded to the spell. They had dined under the great trees beside a camp fire where presided the best cook in the employ of the Cartright Estate.

HIS feet were sore from the chafing of snowshoe thongs, his legs ached from the unaccustomed burden of the heavy webs, his entire body was stiff and weary from the exertion of dragging a loaded toboggan, and yet Lewis Barr was thoroughly contented and happy. By ROBERT E. PINKERTON

Shall Titles Be Restored?

THE English are not alone in loving a lord and adoring a duke. Walking down the Haymarket, a New York Democrat and I met an average-sized, average-dressed, average-looking man, of whom I said after we passed: “Did you notice that man? He is the Duke of Argyle.” By ARTHUR HAWKES

NOW, as all the world knows, there are places in London where a beneficent County Council permits a man to leave his motor-car for a period of time which renders the concession absolutely futile. In fact, the number of people who have had the last act of a play ruined by the haunting fear of going to prison for overstaying the time-limit has never been accurately ascertained. By SAPPER

THE old man came down from the cabin, got into his battered skiff and pushed off to row across the narrow stretch where the shores of Goat Lake converged to form the outlet channel leading to the falls. The shadows of the Pacific Coast maples behind the beaches ahead were stretching across the water like cool fingers and already the conifers cloaking the west side of the valley held a suggestion of the purple haze which sunset releases. By HUBERT EVANS

WHEN Chauncey Hannaford announced his engagement to Bess Pelley, his mother conceived a passionate resentment, composed of equal parts of mother-love, the thwarted sex-instinct of virtuous widowhood, jealousy and a vast selfishness that was innate in her. By ALLAN SWINTON

PREVENTION is now the keynote of all health administration. Public precautions, however, cannot attain to the acme of endeavor, until the hearty co-operation of mothers and homemakers is assured. It is vastly important, therefore, to familiarize oneself with the principles of personal and household hygiene, and public sanitation, and honestly endeavor to put those principles into practice in the home. By MILDRED GREY JACKSON

He’s a Premier at Forty-two

IT TAKES a good skipper to determine the flood of that elusive tide in the affairs of men of which the poet spoke, but it takes a better one, a man well versed in the art of navigation and a man possessing more than a usual amount of natural sagacity, to safely follow the tortuous course that leads on to fortune. By FREDERICK B. WATT

He Put the Gospel Into Gramalogues

AGES ago a savage, gifted with imagination, smeared the smooth side of a granite boulder with red ochre mixed with grease. Then, using a stick for a brush, he drew the outline of a tree. It delighted him, and his fellow tribesmen looked on in wonderment.

By B. A. MCKELVIE

THE capital of this country is an incomparable stage setting. A city of towers, high above a mighty river, with a background of ageless hills, it cries aloud for great drama, for combat, for pageantry and chivalry. In the high vaulted corridors and gilded chambers of parliament one expects gallant gentlemen, figures in the heroic mold, leaders of men commanding undying loyalties. By DOUGLAS MACKAY
April 11927