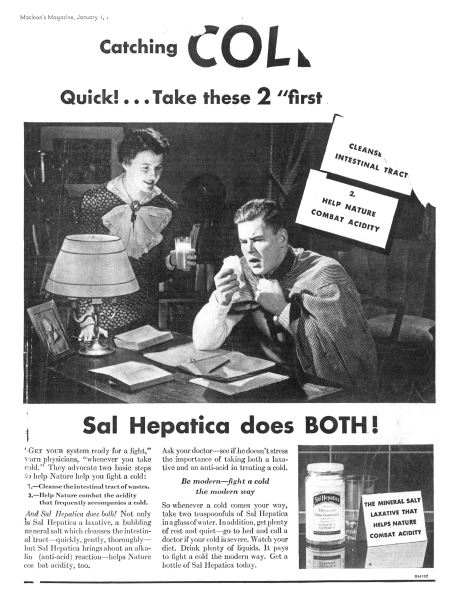 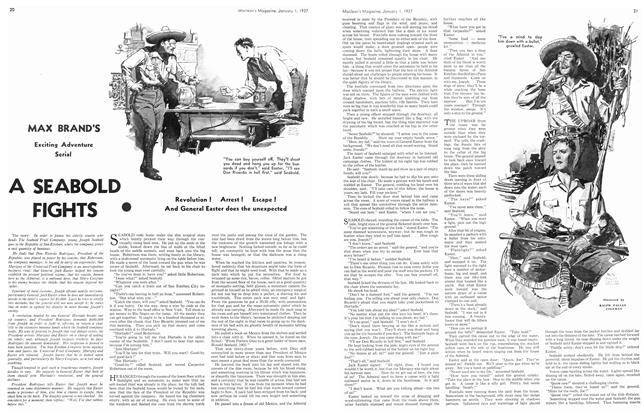 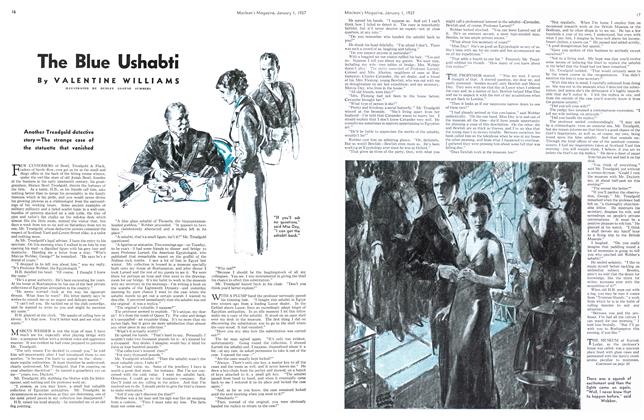 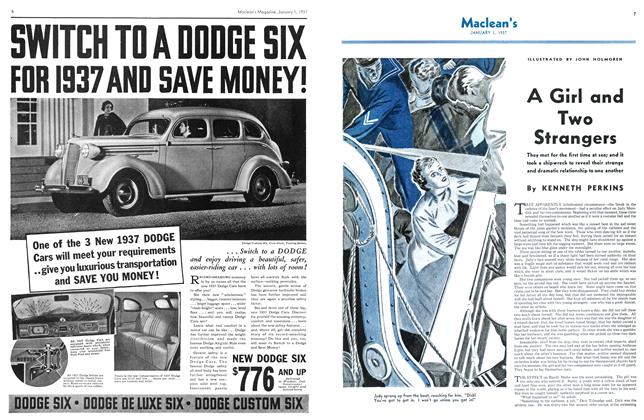 A Girl and Two Strangers

The story: In order to please his elderly cousin who heads The Seabold Fruit Company, young Joseph Seabold goes to the Republic of San Esteban, where the company grows a vast quantity of bananas. He finds that Don Ricardo Rodriguez, President of the Republic, was placed in power by his cousin; that Robertson, the company manager, is too old to carry on vigorously; that Marigny of the Universal Fruit Company is an unscrupulous business rival; that General Jack Easter helped his cousin establish the present political regime; that his cousin, known here as the Admiral, is a national hero; that Mary Cosgrave is his enemy because she thinks that his cousin injured her other.

FEW CUSTOMERS of Bowl, Treadgold & Flack, tailors of Savile Row, ever get as far as the small and dingy office at the back of the fitting rooms whence, under the owl-like stare of old Josiah Bowl, founder of the business in the early nineteenth century, his great-grandson, Horace Bowl Treadgold, directs the fortunes of the firm.

A Girl and Two Strangers

THAT APPARENTLY infinitesimal circumstance—the break in the cadence of the liner’s movement—had a peculiar effect on Judy Meredith and her two companions. Beginning with that moment, these three revealed themselves to one another as if it were a costume ball and the time had come to unmask.

WHEN OLD Scarface, overlord of the Bogachiel country because he was the biggest grizzly and therefore the biggest carnivore in all that wild land, tried to smash the life out of Pym, tiniest of mammals, it seemed an inconsequential thing. But the pygmy shrew, half the size of a mouse, escaped, and thereby the act of the morose bear unleashed forces which, if he could have foreseen them, would have sent him hurrying from the place, shaking with fear. By KENNETH GILBERT

LAST SPRING, as usual, floods in various parts of Ontario provided news for the front pages of the newspapers. Property damage was severe and a few persons were drowned. It seemed then that the province would never be troubled by a lack of water. By HUGH TEMPLIN

So You're in the Market?

ACCORDING TO the estimate of a man whose lifework it is to handle market figures accurately, as much as $60,000,000 changed hands in Canada, via listed and unlisted mining stocks, on a single day during the height of the mining boom last summer. By WILFRID SANDERS

A COUPLE of weeks ago a gentleman named Woollacott exploded with a loud pop in these pages, in a frantic attempt to pin our current political and economic distress directly on women schoolteachers. Waving a crotchety finger, he professed to see a composite picture in which women teachers appear as immature, exceedingly young, poorly trained, uncultured, inexperienced girls shirking housework for the easy hours and big pay of teaching; girls who are really looking for a husband, and are loath to accept responsibilities or study for their job one minute longer than the law requires. By A Woman Schoolteacher

SANTA CLAUS having sung the sweetest cash-register symphony that Canada has heard in five years, Parliament will meet more tranquilly than since Mr. Bennett came out of the West to banish unemployment or perish. Yet the session will be interesting; may even have its drama. By A POLITICIAN WITH A NOTEBOOK

I AM WRITING this at 12.30 on a winter’s night toward the closing weeks of the year 1936. When I use the term a “winter’s night” it must be understood it is in the English sense. You must not visualize snow-covered roofs, with the blue moonlight glinting on the chimney pots and casting deep azure shadows.

ALTHOUGH left a little breathless, official Ottawa envies and approves the accelerated pace at which Arthur B. Purvis moves and works. Mr. Purvis, top-flight Canadian industrialist, has become our No. 1 dollar-a-year man, as chairman of the National Employment Commission. By FLOYD S. CHALMERS
December 151936