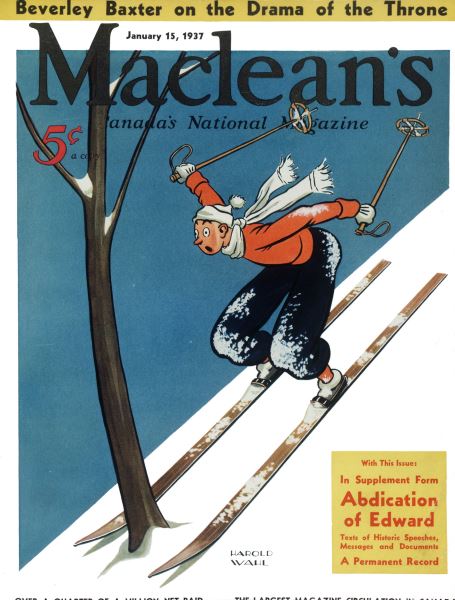 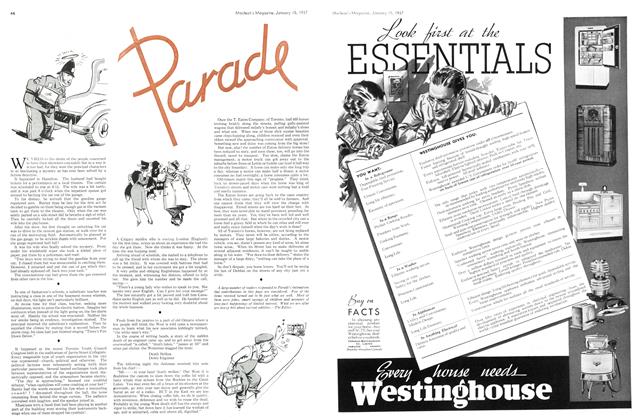 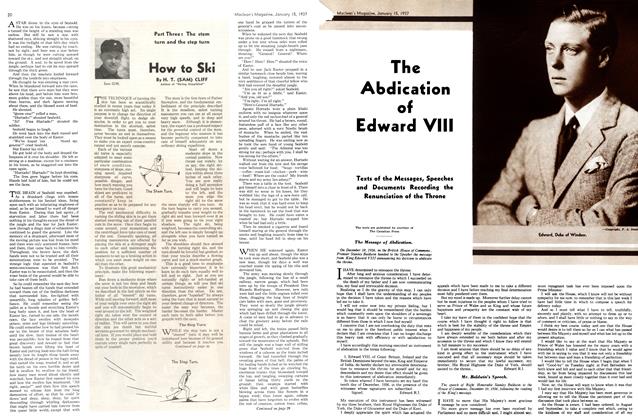 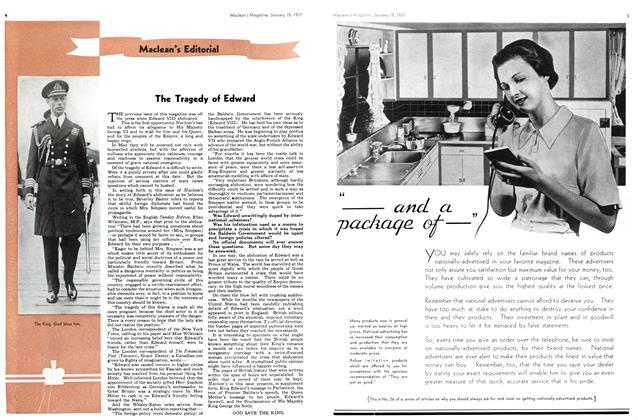 The Tragedy of Edward

WE YIELD to the desire of the people concerned to have their identities concealed, but in a way it is too bad, for they were the principal characters in as fascinating a mystery as has ever been solved by a fiction detective. It happened in Hamilton.

Part Three: The stem turn and the step turn

The Tragedy of Edward

THE previous issue of this magazine was off the press when Edward VIII abdicated. This is the first opportunity Maclean's has had to affirm its allegiance to His Majesty George VI and to wish for him and his Queen, and for the peoples of the Empire, a long and happy reign.

Kent Power, scientific detective, in the strange case of The Cobra and The Pathan By BENGE ATLEE27 min

MOST CANADIANS who listened to ex-King Pike Chooses His Agency,” appearing on page twelve. It’s an amusing yarn. Goodness, how we need amusement. There is no end to the subtle devilry Benge Atlee can cook up for Kent Power’s attention. This time it’s a murder by snake-bite.

The Abdication of Edward VIII

Texts of the Messages, Speeches and Documents Recording the Renunciation of the Throne

It’s a Good Trick—A woman is a person who can listen to three other women without missing a word, while telling them about her operation.—Lindsay Post. Facts About Machines — There is abundant proof that the advent of the machine and new discoveries eventually increase opportunity for labor.

The Toughest Job in the World

One of hockey's best known referees discloses what happens to the man who blows the whistle By M. J. (MIKE) RODDEN12 min

The Only Chance—The curate prided himself on his oratorical powers. He was describing the downward path of the sinner, and used the metaphor of a ship drifting and going to pieces on the rocks. A sailor in the audience was deeply interested.

How Smart Are You?

Draw a circle and in it place nine cats, as above. Now, draw three lines inside the circle and by doing so separate each cat. Answer to Puzzle No. 19 Problem—Mr. Cox, learning that Mr. Hicks was going off on a sabbatical leave, went to him and offered to rent his home for a year.