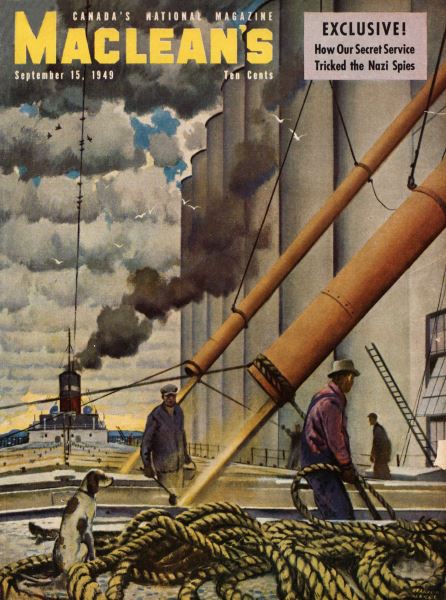 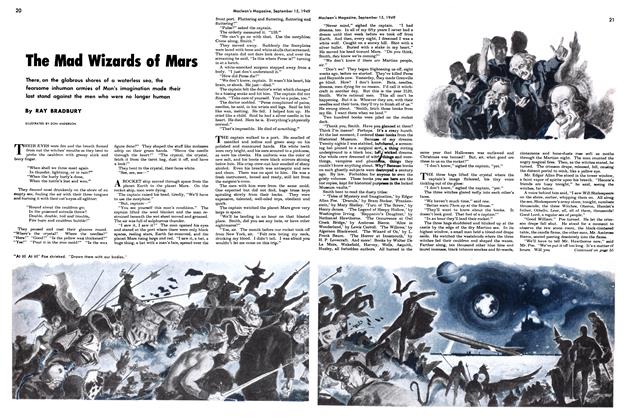 The Mad Wizards of Mars 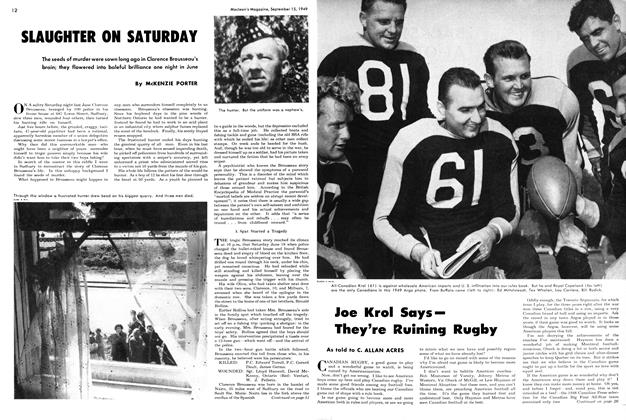 The Mad Wizards of Mars

There, on the glabrous shores of a waterless sea, the fearsome inhuman armies of Man’s imagination made their last stand against the men who were no longer human By RAY BRADBURY19 min

The seeds of murder were sown long ago in Clarence Brousseau’s brain; they flowered into baleful brilliance one night in June

ANADIAN RUGBY, a good game to play and a wonderful game to watch, is being ruined by Americanization. Now, don’t get me wrong. I like to see American boys come up here and play Canadian rugby. I’ve made some good friends among my football foes. I blame the officials who are beating our Canadian game out of shape with a rule book.

By As told to C. ALLAN ACRES17 min

2223
HOW WE TRICKED THE NAZI SPIES

THE GAHAHOQUE GAMBLE PAYS OFF

When the workers bougler this plant they sang in the reet. Three years later, there’s a success story to shout about By FRANK HAMILTON17 min

THE FAMILY stood about, all smiling broadly. Louis took the air rifle carefully into both hands, and held it gently before him with the slim shining barrel pointed upward and away from him. His cheeks flushed warmly. He allowed his eyes to carry down the spotless nickel-plating of the barrel, then over the works, the neat and trickylooking peep sight, and the slick repeater-action lever, marking and devouring each perfect detail. By GEORGE BABINEAU16 min

How we tricked the Nazi spies

The Untold Story of —

Men Want To Hog Everything !

Canada’s first woman M.P. wouldn’t like to be a man but she thinks she should be treated as if she were

89
HOW WE TRICKED THE NAZI SPIES

THE WOMAN WHO WROTE "KITTY”

IN THE Vancouver Island backwoods settlement of Cobble Hill lives Rosamond Marshall who has written some of the sexiest novels on the market today. Cobble Hill, near Duncan, is so far off the beaten track that it is ignored by the retired brigadiers who populate the island’s gentler watering places. By EVA-US WUORIO13 min

1415
HOW WE TRICKED THE NAZI SPIES

You think dogs are dumb? Brother, how smart are you? Capable canines talk, multiply, obey orders and live without working By JOHN GIBSON11 min

1819
HOW WE TRICKED THE NAZI SPIES

The Golden Gabber from Fort Garry

Stewart MacPherson was a washout in Winnipeg but in Britain he’s the rajah of radio. He talked a stake of $7 into $80,000 a year By LESTER MATTHEWS11 min
September 11949