Most men look forward to the time when they can retire from business with the happiest of anticipations. But few realize just what a change it implies and how discontent steps in and makes life a burden. The writer illustrates this phase of the question by a reference to actual cases.

OUR village by the sea lies in a district of large towns, and is steadily rising in favor as a health resort. Though quiet in winter, it is bright enough during the summer months, when the excellent sands and other holiday essentials attract large numbers of visitors. Moreover, it has some good shops, is partially paved and well lighted, and boasts a convenient railway connection with the larger county towns. These considerations have brought to the spot quite a number of people who have retired from business, and who are therefore able to arrange

the economy of their lives without regarding toil for to-day or knowing care for to-morrow.

The place is homely and hospitable to a degree, and this gives the observer many opportunities of noting the methods of those lives, apparently so free from the needs that fetter and limit existence. It might be supposed that observation would result in a certain envy; but this is; another of those cases in which the ideal and the real are far removed from one another. Somewhere, in more than one of these stories, a link has been missed, and the truth is

greviously unlike the generally entertained conception of comfort and ease. It leads almost irresistibly to the conclusion that a favorite mark of toiling thousands—independence and timely retirement—may in many eases prove little better than a snare.

There is the ex-superintendent of police. For years he was a familiar figure in the great county town, and had friends or sycophants in every street. Gifted for his profession, he became a successful and respected officer; but all through his career he saw clearly the ultimate goal of a superintendentship, wifii immediate retirement upon a substantial pension and an evening of leisured years. Flis chance came quite early, and he was able to resign while all his faculties and much of his energy remained. After a while he came down to our village and bought one of the modest bay-windowed cottages on the West Cliff.

His time is his own, and as his needs are few, his pension accumulates steadily. When he is in good health he is an excellent companion, for he remembers many sensations, and can furnish his hearers with curious sidelights upon police life and British law, and remarkable instances in human nature. But frequently a species of indisposition comes upon him, when his face grows gloomy and his manner becomes curt; and it was this indisposition that puzzled me so much until I noticed how eagerly he looked forward every week to his Police Review. Afterwards I marked him standing evening after evening among the shadows of the little railway station waiting to secure the first copy of the evening paper which comes down to us with .the last train from town. (At last it began to be borne in upon me that

when those items stood together this man’s tragedy was told. He was a plant uprooted and dying because it had lost its soil, or he was a keen player looking over a wall at the game from wdiich he had retired too soon and forever. Equipped only to be a gladiator, he left the arena to become a spectator, and is now slowly learning that he made a mistake. His face lights up strangely when the local constable, a lanky recruit who admires and envies the pension, deigns to salute him in passing.

Then there is the ex-manager of a factory, a stalwart man well on the hither side of sixty, with a ruddy face which seems to glow with the pleasant humors of life. Three years ago the factory was bought by a syndicate, and his position was wanted by one of the new owners. He was offered another or a superannuation, or at that time he might well have secured! a place under other masters. But he had always looked forward to a timely retirement, and he was glad that it had come so soon. At our village he had spent his summer holidays once, and he came back to it now for his long vacation, his Indian summer. He has a larger pension than the ex-superintendent, and he has bought a, larger house with a larger garden.

Flis temperament is a genial one and he had never allowed business to become a too absorbing interest. Now he reads much, takes long walks across the sandhills, and is quite an enthusiastic worker for the parish church; but it cannot be denied that he seems oddly out of place in our village. Already he has begun to feel a lack. ‘Ht wouldn’t be a bad idea,” he remarked one day when we chanced to meet—11 it wouldn’t be a bad idea if one could take up some kind

of light business, seeing that one has so much leisure. Not to fill up one’s whole time, you know, but only” — And there he halted, perhaps remembering how impossible it was to go back, and also that the present thing was the thing he had always set his heart upon. He will probably leave our village in a year or two, under the impression that if is too dull for him; but he cannot leave the new life, and no minor change will meet his necessity. Or, perhaps, some day out on the sandhills he will realize the truth, and that day will be one of the saddest in his life.

There are others here in like case, forming a little band quite distinct from those who have retired from business because of advancejd ago and incapacity to continue. In a largo house on the parade live an ex-publican and his wife. The man is rotund and bluff, with a strident voice, and the woman is somewhat thin and keen, with alert eyes and resolute lips. After one quiet year in their new house they resolved to take in summer boarders, a course which our village folk, wrongly but not unsympathetically, attributed to desire for profit. There may have been something of this, but at most it was only one strand in a strong cord. Then there is an ex-ironmonger of little more than forty, a fair little man who was doing an excellent business in a large manufacturing town. Just as he had secured a competency by untiring diligence and tact, his wife ’s health gave way, and he seized the opportunity to carry out thus early the retirement which he had regarded as twenty years distant. He has taken to building now, and¡ it may be that he will contrive to take root in the new soil; but he will never grow so well again as he did beG

hind his busy counter. Last of the group is an ex-draper, who made himself “independent” by selling his business at a fortunate moment. He came down here to live a life of ease and freedom, but lately he has begun to make frequent visits to the town. I have met him there twice, walking forlornly in the High Street. He will not enter the old doorway and tread the old floors again—he would not do it for worlds; but he haunts the scene at intervals in a singularly unreasonable way. ,

All these men are good specimens of the British worker of the saner class—the kind that cherishes an idea of life which is not concerned only with the heaping up of riches and the grosser considerations of existence. Indeed, this fact supplies much of the pathos and much of the irony of the situation, for if they had been nothing better than mere money-grubbers they would certainly have remained in their proper places. But their ideal was not built up of knowledge but rather of sentiment, and it has led them into a hard place. Day by day the fact grows upon me that they are strangers in a strange land, foreign to the staid and stagnant life of our seaside village. They had each his sphere, and a faulty conception of life persuaded him to leave it. There is no going back, and they cannot turn to other things; but they have no equipment for these changed conditions, and now their universe is empty of the one thing that made existence a life indeed. Nature’s call to retirement is plain enough when it comes; but it never really came to them, and slm has no place for them outside their lost places, no room for them in her economy. It may almost be imagined that she turns away from them,

impatient that they should have known life and themselves so imperfectly after living so long.

So, in a way, there is no present life for them, and their existence is akin to that which ghosts may be supposed to enjoy. I meet the ghost of a police officer on the beach, a haunting, restless, purposeless figure with a cloud upon its bro »vs. Along the cliff comes the ghost of a manager, seeking in vain the peace which he lost finally when he first set himself to seek it; and in the main street I come upon the ghost of a tradesman who haunts in mind the busy counter which he has transferred to some one else.

Paradoxical as it may seem, the man who thinks of retiring from business may well pause to consider his prospects. After all, money cannot secure the independence of which he dreams, for much more than a

pension is needed even for those quiet days of life's evening. There must be certain qualities of soul which will harmonize with the changed conditions, or instead of rest and peace there will be the misery of unrest.

There are so many to whom life is just one thing, although they may not realize it ; and these will do well to hold their places until the unmistakable summons comes. Nor is it less true that he that stays too long sins less than he that goes too soon; for wffiile the former sins against himself, the latter is a danger to his fellow-men. So many of them have no eye for things below the surface, and he and his pension encourage them to set for themselves a mark which may be their ruin. Following that example, they may close a career of honest toil with an irredeemable error. 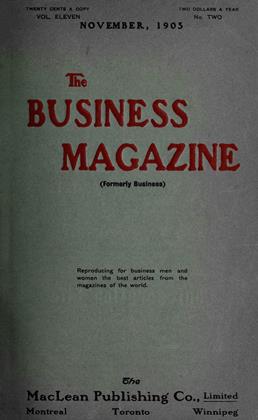