In his story of the romance of steel and iron in America, Mr. Casson has advanced to the era of consolidation and the formation of the steel trust. It was J. Pierpont Morgan who stood behind and engineered this mammoth Merger, by means of which a full two-thirds of the most profitable American industry was organized into the biggest of the world’s corporations.

IN the early Spring of 1901 J. Pierpont Morgan strode among the steel kings like a beneficent giant. Two years before, he had refused to become the overlord of the iron world ; but several things had happened since that time. He was now to a large extent a steel king himself. He ’had successfully organized the Federal Steel Company. He was a heavy stockholder in the National Tube and the American Bridge Companies. Moreover, his intimacy with Frick had given him a better knowledge and a more favorable impression of the steel men.

Besides, at the present .crisis, his own life-work was in danger. For more than thirty years Morgan had been a builder and a peacemaker. He was the most implacable foe of hostility among capitalists. He was the champion of “team play” and “community of interest.”

From his point of view, therefore, the exit of Carnegie was a business necessity. Carnegie was preparing to parallel the Pennsylvania Railroad and to compete with the National Tube Company, both of which were in Morgan’s “sphere of influence.” To permit such a man to control the steel market was unthinkable.

From a business standpoint, Carnegie was invulnerable. He had his own ore, coal, railroads, steamships, and steel mills. In his commercial and personal interests he stood entirely outside all associations of capitalists. He enjoyed to the full what his Scottish poet called “the 'glorious

privilege of being independent.” It was an amazing feat to win a place absolutely alone in an age of interdependence — when even the nations were clinging one to another for support ; but as a factor in the business situation his position was not to be tolerated. The stability and peace of mind of the American financial world demanded that Andrew Carnegie should abdicate his throne.

Frick hurried to Pittsburg and offered about thirty million dollars for the big Jones A Laughlin plant, but was refused. On his return he found that Morgan had been trying to make terms with John D. Rockefeller, Jr., for the purchase of the Rockefeller ore mines. The negotiations had come to a standstill. For several days it appeared as if the powerful Standard Oil group would be left outside of the steel combination.

To break the deadlock, Henry H.

Rogers suggested that Frick, who is

a better buyer than Morgan, be sent to Rockefeller. This expedient was tried and succeeded completely.

In this way the United States Steel Corporation obtained about two-fifths of its ore and nearly onehalf of its ore fleet.

The speed with which the great structure was built is almost incredible. Schwab had secured Carnegie’s selling price in January, 1901, and by February 25 the corporation had taken definite shape. According to its New Jersey charter, its purpose was practically to manage the business of the human race—to own and operate the whole world, with the the sole exception of the railroads and canals of New Jersey. Its actual capital was declared to be three thousand dollars, which it had power to increase. Its three nominal incorporators were men who were comparatively unknown. Its life was to be “forever.” All this, however, was only the formal and legal way of making a beginning.

On the following day the fog of rumor was dispelled by an official announcement from Mr. Morgan’s banking house. Next came his advertisement for the stock of the smaller shareholders in the companies that were to be absorbed. It was signed by about forty well known names. Each one represented millions. Some could speak not for themselves alone, but for whole cities.

that all stock of the companies going into the trust must be in his hands in eighteen days. But the minds of the small stockholders did not work with Morganic swiftness, and he was obliged to give them twelve days longer. By April 2, however, Morgan’s greatest task was accomplished. The corporation which is his financial masterpiece—by which his reputation will stand or fall—was complete. Its capital was fixed at a little more than a billion dollars, besides three hundred and sixty-six millions of bonded and mortgage debt. The stock, half seven-per-cent preferred and half common, was being sold to a greedy public.

Seventy per cent, of the American iron and steel industry had become organized. More than that, it had become Morganized ; it had been put together on “community of interest” lines. Instead of being cut apart from other branches of business and dominated by one man, it was now linked to a dozen banks, a score of railroads, and an unknown number of other corporations.

Its officials and directors were not steel-makers. Less than a third of them understood the language of steel. Schwab, a practical steel man, had been made president at the request of Carnegie ; but in the management of the corporation, the president ranked, not first, but third. Judge Elbert II. Gary was first, as head of the executive committee, and Robert Bacon—who was succeeded, a little later, by George W. Perkins— was second, as head of the finance committee. Strictly speaking, the president was merely the head of the manufacturing department. Gary was a lawyer, Bacon a banker, Perkins an insurance man.

tion was a financial even more than a manufacturing organization. It was first for money and second for steel. This was a new and important development in the evolution of the steel business. On its board of directors was only one steel-maker of the old-fashioned sort, Abram S. Hewitt, and he entered unwillingly. To his mind a billion-dollar corporation was a dangerous innovation. The modern steel-maker was typified in H. C. Frick ; the others were men who had evolved into financiers from all sorts of beginnings.

More than half of the officials and directors were self-made men. The three who stood foremost — Gary, Perkins and Schwab — had climbed from the ladder’s lowest rung. They were young men. The average age of the officials was forty-eight, the oldest being fifty-five and the youngest, Charles M. Schwab, thirty-nine. For their services in managing the immense corporation, Schwab and Gary drew salaries of a hundred thousand dollars apiece. Perkins received nothing.

“Mr. Morgan would not permit him to get a salary,” said Judge Gary.

It has often been stated that Morgan himself received a huge fee for his successful work in effecting the consolidation. As a matter of fact, he received no direct payment whatever. He held a one-fifth interest in a syndicate that floated two hundred millions of the company’s securities, and his total profits were less than three millions. “High pay for a few months’ work,” the outsider may say ; but he should remember the magnitude of the achievement and the vast responsibilities that Morgan had to bear—and still bears, to a great extent, so closely does the pub-

lic identify him with the fortunes of his greatest financial creation.

“Morgan was big and fair and square,” says Schwab.

“No man, no number of men, outside of Mr. Morgan, could have formed the United States Steel Corporation at that time,” declared Judge Gary.

Another New York financier, in an outburst of enthusiasm, exclaimed :

“I believe that in the next twenty years a statue of J. Pierpont Morgan will be placed in some public square, to mark the general appreciation of his wonderful organizing ability.”

in the consolidation of businesses it has been found that the services of a company promoter are indispensable. A business man naturally dislikes to sell to his competitor. He prefers to deal with an outsider.

“Every manufacturer imagines that his plant is better located and better managed than his neighbor’s,” says W. H. Moore, who is, next to Morgan, the most successful consolidator in the steel industry.

And now, for the practical people who love facts and figures, here is a feast of statistics. In the long history of commerce, where has there been a corporation with possessions like these ?

The United States Steel Corporation owns as much land as is contained in the three states of Massachusetts, Vermont, and Rhode Island.

It employs one hundred and eighty thousand workmen—more than the combined armies of Meade and Lee at Gettysburg.

More than a million of the American people—as many as the population of Nebraska or Connecticut — depend upon it for a livelihood.

lars—more than the United States pays for its army or for its navy. “Our workmen have a first mortgage on United States Steel,” said Charles M. Schwab.

It owns and operates a railroad trackage that would reach from New York to Galveston, or from, Paris to Constantinople. It possesses thirty thousand cars and seven hundred locomotives.

It has nineteen ports and owns a fleet of one hundred large ore ships. This is the most numerous of all American fleets under a single ownership. It is the sixth largest commercial fleet in the world, and from the point of view of industrial efficiency, it is perhaps unequaled in any country.

It has ninety-three blast furnaces, nearly all of them running day and night, and it makes forty-four per cent, of the pig iron of the United States.

From its fifty great mines it produces one-sixth of all the iron ore in the world. In one year it heaps up a mountain of more than sixteen million tons of red ore.

It makes more steel than either Great Britain or Germany, and onequarter of the total amount made in all the countries of the world.

gas. Its supply of fuel will last for sixty years.

It can make anything in steel from a carpet tack to steel rails, from a tin can to armor plate, from a wire nail to an Eiffel Tower.

Its iron works and steel works are mainly in Pittsburg and twenty-five smaller “steel cities” within a hundred miles’ distance ; but it also owns large plants in Chicago, Joliet, Milwaukee, St. Louis, Munde, Elmira, Philadelphia, Troy, Hartford, Worcester, and elsewhere. It is about to create a new industrial centre at the southern end of Lake Michigan. Its ore is mainly in Minnesota. Its headquarters are in New York, though as a New Jersey corporation it maintains a nominal “general office” in Hoboken.

If it had been organized in Pennsylvania, its first fee would have been fourteen hundred thousand dollars, and its yearly tax more than five millions ; but being organized in New Jersey, its charter fee was a mere two hundred and twenty thousand dollars. Even this comparative trifle was more than the fortune spent by Baron Peter Hasenclever in founding New Jersey’s iron business. Its annual tax to the state—another trifle of sixty odd thousand dollars—is more than three times the cost of the famous Lynn iron works, built in 1645.

Its total responsibilities, as expressed in stocks and bonds, were as follows, at the date of its first annual report :

cent, bonds held by the

And not even this stupendous total expresses the full power of this industrial empire. Behind it stood 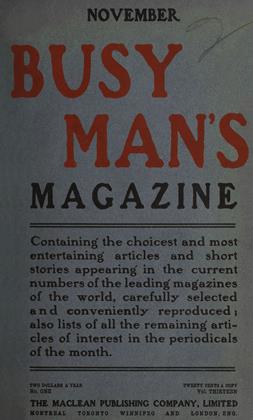