DEVELOPMENTS IN SCIENCE AND INVENTION

Click to View Article Pages
DEVELOPMENTS IN SCIENCE AND INVENTION

Wonderful indeed are the results accomplished by machinery. Production has been tremendously increased and what took hours to make in years gone by, can now be manufactured in as many minutes. Nor has the increased use of machinery reduced wages. On the contrary wages have advanced considerably.

IF society were properly constituted, wars and standing armies abolished, and everyone did his share, eleven minutes work per day for each person would be enough to supply the world with all necessities.

So says the French socialist leader, M. Jules Guesde, and he bases his assertion on the fact that modern machinery has reached such a pitch of perfection that seven men can now grow enough corn, grind it to flour, and bake it into bread to feed 1,000 people all the year round.

M. Guesde may be guilty of some slight exaggeration, but the fact of the matter is that very few of us have the least idea what machinery is doing for industry. Already handwork hardly counts, and new laborsaving inventions come along every day of the year. In the factory, the counting-house, the farm, the road, or the home, the story is the same.

Take this matter of harvesting which M. Guesde refers to. In the wheat-growing West they now use a machine which has a cutting bar 35 feet wide, and is drawn by a 50 h.p. 11 tractor.’’ Behind the cutter, and part of the same machine is a thresher, and other automatic machinery, which separates the grain from the! chaff and sacks it. It also drops the straw in bundles at regular intervals.

Yet the old cry that machinery brings down wages is absurd. Thirty years ago a roller in a steel works was paid 7 l-2d. per ton for rolling steel rails. To-day by the aid of improved machinery, one man does the work of a score. He is paid only a halfpenny a ton, yet his wages are 40 per cent, better than they were in the old days.

In large bakeries the bread is now made by machinery. Forty years ago it took fifty-four hours of one man’s work to prepare, roll, and cut 1,000 pounds of dough. To-day, by the aid of machinery, the same work is done in fifty-four minutes. The Quick Bread Company has lately cut even this time considerably. By a new process in the manipulation of the material, they do in six hours what took eight, and—what is more —produce 101 loaves from a sack of flour against ninety-two in the ordinary bakery.

The cotton trade has seen many startling evolutions within the past twenty years. Spinning machinery seems almost beyond improvement. But one part of the process which leads to sheets and shirts has up to the present been necessarily done by hand work at enormous cost.

That is the picking, and it costs, it is estimated, £20,000,000 yearly to pick the American cotton crop alone. Now comes an invention of Mr. George A. Lowry of Boston, which is designed not only to pick the bolls by machiner y, but at the same time to cleanse them from sticks and dirt.

Ir effects a clear saving of 75 per cert, in labor and in cost.

Mr. Lowry’s invention is a petrol engine. So is the new motor streetcleaning machine which was put on the market a few months back. It has four separate sets of road-cleaning instruments, raises no dust, goes along at seven or eight miles an hour, and without any fuss at all does the work of a battalion of 500 able-bodied men.

Most hotels—large ones at least— have already dispensed with the armies of scullery maids once a necessity. The dishes are washed by machinery in a quarter the time at oneeight the cost, and without anything like the human risk of breakage.

Just the same sort of thing is happening in laundries. A machine is at work which will wash and finish collars or cuffs at the rate of fifteen a minute. Or it will wash 200 shirts an hour, and iron and gloss one a minute. Old-fashioned methods of washing by hand will soon be as obsolete as the dodo.

Everywhere you see the triumph of machinery. Enter a tobacco factory. Not so long ago nearly all the processes of rendering the raw leaf into smoking tobacco or cigarettes were done by hand. Now it is all machine work. One machine, which seems to possess all the dexterity and a hundred times the quickness of human hands, makes 200,000 perfect cigarettes in a ten-hour day, consuming 600 pounds weight of tobacco in its task.

The brush is becoming obsolete for painting. Paint mixed in a steel tank is sprayed under pressure upon the surface to be colored. That is howr our big war ships are painted now'-a-days and by the aid of this compressed-air device one man can

easily do the work of a dozen armed with brushes.

Even bricklaying is no longer a handicraft. A Farnham man has patented a bricklaying machine w hich only wTeighs 600 pounds, and does the work of seven men at much less than half the cost. The bricks are fed by hand, a lever presses them into place, side rollers keep a face on the work, and other rollers press the brick down on the mortar, which latter is run out by a hopper. One man can lay some 3,000 bricks a day with one of these machines.

How many coins could you count in an hour? If you worked steadily at the rate of two a second, only 7,200. An automatic cashier, a small machine of aluminum and steel, can do the work of three men by counting 21,600 coins an hour, and into the bargain place them by sixties in bags. And it never makes a mistake, not even between florins and halfcrowns. What is more, this machine is only a beginning. It is prophesied 1 hat in future even banking will be carried on largely by machinery.

Wherever you turn you find machinery doing the work of hundreds of men at much smaller cost and with a startling saving of time. For instance. to bore six 2-inch holes each 12 feet deep in rock takes 180 hours of hand work; a small pneumatic drill does it in eight hours.

The bill for manual labor for making 100 pairs of boots used to be £82. By the aid of machinery the price of the labor is now reduced to £7, and the boots are made in onetenth of the time formerly necessary.

Forty years ago the making of 10,000 envelopes took 217 hours of a man’s time. Now-a-days the time is reduced by machinery to sixteen hours.

Fishing nets are now being made by machinery. Three or four rapid movements of levers, and a whole row of stitches are cast on. A few years ago a woman would have spent half an hour in doing the same work. The machine, though driven only by manual power, does the work of, roughly speaking, sixty women with needle and mesh.

As marvellous perhaps as any other saving is that effected in the printing, binding, and allied trades. Less than forty years ago it took two men more than a week to turn out a couple of thousand copies of on ordinary magazine. To-day ma-

chinery enables the same work, folding, stitching, and covering, to be done in forty-eight hours.

It seems more than likely to anyone who saw the recent electrical exhibition in London that, before many years have passed, harassed housewives will dispense with domestic servants.

Not only will houses be warmed and lighted by this agent, but cooking, dusting, cleaning, even to the washing of windows, will be accomplished by electrical devices worked by an agent sitting in a chair and pressing buttons. 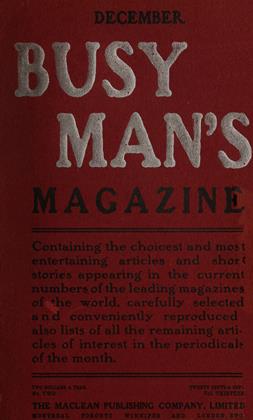