Too busy to sleep more than three hours a day, too busy to eat more than suffices to nourish him, Edison, the wizard, leads a life of healthy and happy activity. His plan of life is regular, the most important part of his work being accomplished at night. The result of his labor can best be estimated by a survey of the Edison department in the Patent Office at Washington, where over SCO inventions are credited to him.

WORK too hard? Bosh! The healthy man can’t work too hard or too much. It isn’t work, but sleep and food, that kills men.”

So spoke Thomas A. Edison, the inventor. Give him a spoonful of peas, or a cracker, and three hours’ sleep, and he can do a day’s work equal to almost three of the ordinary brand. He just doesn’t have time to sleep.

And yet he considers his life a quiet, peaceful one, and finds time to exclaim at the hurry and bustle of modern life. Here is how he describes New York :

“New York ? It is the epitome of the horror of the age. I hate it. I loathe its artificial way of living, its mannerisms, its ways of thought. It has but the one redeeming feature — that it is getting so impossible that people must leave it or become crazy.

“A man in New York gets down to his office at 9, works until 12 or 1, goes out, takes a couple of cocktails, eats a hearty lunch hurriedly, goes back to his desk and works until 5,

hurries up town, stopping for a drink or two, goes out somewhere, eats an enormous dinner, goes to the theatre and supper afterward, and finally tumbles into bed.

“That is the type of man who says to me : ‘I don’t see how you stand the strain of working the way you do, day after day and night after night, in the laboratory.’ Work ? Why, my work is play compared to his. And yet I am here on the average from 8 in the morning until 10 at night, but I am shut out from the world, the work is interesting, there is none of the terrible strain - that comes from work in the city.”

But now and then he does a stunt himself that would place the metropolitan business man in an insane asylum.

“The longest time I ever worked continuously was five days and five nights without sleep. That was during some of the lighting experiments. Before the opening of the Pearl street station I had to work four days and nights on a stretch. You see, we didn’t know just what would happen

when we turned on the current. Everybody said it was going to be a failure, and naturally I felt anxious.”

He was asked what effect loss of sleep had upon him.

“None at all,” he answered. “I have always been able to drop down and sleep anywhere when I had the time. I feel absolutely no ill effects from long periods of work. People sleep too much. Three or four hours is enough for any man.

“People who talk of insomania make;me tired. A man came to me once who was troubled that way. I offered to cure him. He took me up.

I put him to work on a mercury pump and told him to finish it at a certain time. He was just the man I had been looking for ; one who would not need to stop for sleep. At the end of tjpe third day I found the pump all broken to pieces and my friend sound asleep on the ruins.

“Sleep is a habit ; if the sun should keep right on shining through the night people would get over it.”

Yes, the great reason why Edison despises sleep is because he is too busy to enjoy it. He looks upon it, save for the three hours,)as a luxury not to be thought of by a man with work to do. The same is true of his food. He takes just enough for nourishment, and that is all. Good dinners are for those with not much else to do but to eat them. The same is true of feather beds. One day he accepted the invitation of a friend who lived “in a sort of castle.”

“Lord,” he said, “I wTas miserable all the time. First we sat down to a table that had too much of everything, including silverware and fancy glasses. Couldn’t eat anything. That night when I went up to my room a valet came up to undress me. Kicked him out. Whenever I feel that I am too old to undress myself I want to

lie down and die. I took off my clothes and tumbled into bed—and almost lost my life. It was a big feather thing, and it came near smothering me. I pulled it off and slept on the mattress.”

And what has he to show for all this life of hard work and self denial? In the first place, he has made more inventions than any other living man. In the patent office at Washington there is a department marked Edison where an array of over 300 patents are to be found. Those who see this exclaim : “Oh, Edison can’t last

much longer. He is working himself to death.” And yet every year finds additions.

“Mr. Edison’s work as an inventor,” said Mr. Dyer, who has charge of the legal department of the Edison laboratory, “as shown by the records in my office, extends over a most varied field. In addition to his better known patents granted in connection with the development of the electric lamp, the phonograph, telegraph, telephone, ore-milling machinery and storage batteries, I find that the inventions include vote recorders, typewriters, electric pens, vocal engines, addressing machines, methods of preserving fruit, cast-iron manufacture, wire-drawing, electric locomotives, moving picture machines, the making of plate glass, compressed air apparatus, and many others.

modifications and improvements on such devices appears really marvelous.”

Edison’s daily routine of work is something like this :

At 10 a.m. he starts for his office, where for about two hours he is intensely occupied in attending with his private secretary to the mass of correspondence piling in upon him at the rate oftentimes of over 200 letters a day. After disposing of his correspondence he devotes his time to a perusal of the numerous papers, pamphlets, documents and books, scientific and otherwise, that come to him from all parts of the world. He reads with great rapidity, and yet with astonishing thoroughness, as days afterward he recalls what he has been over.

By 2 p.m. he is in his laboratory reviewing the results of the experiments and work of his assistants performed in his absence. Consultations with his chief assistant next occupy him for a considerable time. After this is over he may be said to be fairly in the midst of his labor of love. A recital of the experiments he daily tries, the plans he devises and the suggestions he offers would seem exaggerated were it not that hundreds of record books in his laboratory bearing the marks of his labor attest the same with unimpeachable accuracy.

The majority of days his meals are served him at his work. The hard labor of the inventor, however, begins after dark. The work of the day is more of a preliminary character— a getting ready for the herculean efforts that one by one grow and develop, until they finally reach as a whole a perfected invention.

The midnight lunch is a striking feature of the laboratory life. At 12 o’clock every nmht two men and a

dog enter the laboratory laden down with baskets of edibles from a neighboring caterer. The dog, a huge Newfoundland, plays as important a part in the performance as his biped companions, for, with a lighted lantern hanging from his mouth, he leads the way from over the railroad track and across the fields to the abode of the wizard. He also assists at times by having strapped to his back a basket or can containing some of the lunch. The repast without the dog to participate would be barren. He seems to know his standing, and he is always to be found at his post of duty. Mr. Edison himself, however, eats little.

Around the lunch table gather the inventor and his assistants, and as the good things disappear they discuss the day’s work, tell stories and gossip generally. A freer or gayer set could scarcely be found. The jovial good nature of the chief spreads to all, and fun and fancy reign supreme. After lunch once more begins the work of science, and continues until, one by one, the assistants drop off to sleep. A few retire to their homes ; the larger number, however, follow the plan of the leader and utilize their benches for beds. Edison himself gives in generally about 4 a.m., selecting some unoccupied spot, where with his coat for a pillow, he sleeps soundly sometimes until 10 o’clock, other times until 6, for his time of rising varies.

Mr. Edison has, however, a good wife, who takes the greatest care of him. But for her watchful eyes there is no telling what would happen to him. Mr. Edison is so absent-minded when engrossed in his work that he apparently loses all count of time, and but for Mrs. Edison would probably work on until he dropped from sheer exhaustion. When he has some

particularly hard problem to work out it is difficult to get him to leave his laboratory at East Orange. His meals are brought in to him, and he insists on sleeping on a “shakedown” in his private office. Mr. Edison has become so interested in his life’s work that even when away from home —on pleasure bent, as it were—he still has his mind upon it.

Day after day Edison plods along his busy life, amusing himself by working the full limit of his capacity;

too busy to sleep, almost too busy to eat. And some one said that when death, in the end, should call for him, he would motion him away with a swreep of his big hand, muttering, “Call again. Too busy.”

And yet Mr. Edison realizes that he is growing old. He was once asked the question :

“Can you not invent something that will keep us ever young and fair ?” The wizard nodded wisely. “It may come,” he said, “it may come ; not in my time, not yet ; but why not ?

“How ? By the sacrifice of animal life. By serums that will replace worn-out tissues. With it should come, however, the mental change, for when a man has seen all, has worked and played and suffered and has reached the life limit, he is usually ready to go. I know my father at 94 was reconciled and—

“Well, I shall be ready, too, but,” the eyes grew introspective, “it would be interesting to know if life ever v/ill be indefinitely prolonged.” 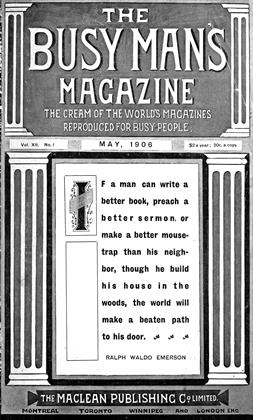