The Romance of the Telephone H. C. NICHOLAS IN MOODY'S MAGAZINE August 1 1906

Some of the wonderful developments in telephonic communication during recent years are recorded in the following article. Not only is the increase in the number of telephones remarkable but also the uses to which they are being put. We have to-day all sorts of arrangements for expediting business by means of the telephone.

AMONG the curiosities exhibited at the Philadelphia Exposition, which was held in the centennial year of 1876, was the first telephone invented by Professor Bell. With its huge leather transmitter and the pointed receiver, this instrument was viewed as a wonderful but useless invention. The first rudimentary telephone exchange was established in Boston in the following year. It was, therefore, only thirty years ago that the telephone was invented, and less than that since the first commercial exchange was established. And yet, to-day, the telephone is in almost universal use throughout the world, and at a rough estimate there are probably ten billion messages transmitted in the chief countries in a single year. In the United States alone there were over six billion telephone messages last year. The story of the development of the telephone during the last three generations reads like a fairy tale.

Certainly no other industry in the history of the world has had such a remarkable development in such a brief period. In 1880 the population of the United States was, in round numbers, 50,100,000, and the number of telephones of all kinds reported in the census for the year was 54,319. As late as the close of 1894 there were less than 300,000 telephones in the country. In 1902 the number of telephones reported by the census for that year was 2,315,000. In other words, while the population increased 56 per cent, from 1880 to 1902, H

prediction, and by 1010 it is believed by telephone authorities there will be approximately 15,000,000 telephones in the United States. Before this maximum has been reached the indications are that the telephone will exceed the mail in the number of messages per day. The average rate for every class of telephone message is now about 1.7 cents, or less than the average rate for first-class mail.

The immense growth of the telephone system, during the last few years, is largely accounted for by the expiration of several fundamental patents, formerly controlled by the Bell companies, and which constituted the basis of their monopoly. The Bell companies were nearly twenty years in creating a demand for 500,000 telephones, whereas during the last five years, largely as a result of the independent telephone movement, there has been installed nearly 5,000,000 telephones. At least 2,000,000 more will be added this year. To maintain their position the Bell companies have been forced to expand at an unheard of rate, and although they had a start of nearly twenty years they have already been outstripped in many sections of the country by the independent companies. There is to-day an independent telephone system in every state and territory in the country with the single exception of Utah. In some sections the independent companies have four and five times as many subscribers as the Bell companies, and they are rapidly building up a long distance telephone system which rivals that of their older competitor.

The growth of the telephone lines during the last few years has been the result of the purpose to extend the telephone to every town, no matter how small, throughout the United States; and in all of the cities

and towns to place a telephone within easy and immediate reach of every person whose income is sufficient to permit him to ride on street cars. The extent to which this policy has been put into actual construction is indicated by the fact that, while the last census gave a record of 10,602 incorporated cities, towns, villages and boroughs, there is to-day telephone communication to 26,000 different settlements, and the extension of lines into new territory is going on as fast as the wires can be strung.

There is at the present time about one telephone for every twelve persons, man, woman and child, in the United States. Telephone authorities are looking forward to a maximum of one telephone for every five persons, and a system of long distance wires so complete and perfect as to place every subscriber in communication with every other subscriber throughout the land. Already there are approximately 300,000 miles of long distance telephone wires, representing an investment of about $50,000,000. These lines, if straightened out, would reach from here to the moon, with enough wire left over the encircle the earth three times. These long distance wires can be attached to lines about 4,000,000 miles in length in the different cities and towns, reaching out to about 7,000,000 subscribers. The banker in his office in New York or Boston without leaving his chair can call up and within less than five minutes be talking with the business man in Minneapolis, Omaha, Kansas City or Indian Territory. In the near future the long distance wires will be completed through to the Pacific Coast, and the subscriber in Maine will then be able to converse with the subscriber in California.

In the larger cities like New York, Chicago and Philadelphia, the telephone has become indispensable in the transaction of business. A temporary suspension of the telephone service would completely paralyze the business of Wall Street, and cause an almost entire cessation of business on the Stock Exchange. The general use of the telephone has enormously increased the capacity of the business mechanism. It is a far greater time saver than the telegraph or the railroad. During the last few years there has been a new phase of telephone growth. The larger business, law and banking houses have been installing telephones in large numbers. The idea is to put a telephone on practically every counter or desk. Communication within the store or bank is free, an employe without leaving his desk being able to talk with any one in the store. The actual saving in time in this way is worth hundreds of dollars to a large business establishment in the course of a year. A single department store in New York has 1,500 telephones, another 800 and a number from 200 to 500. Scores of banking houses in Wall Street have from twenty to fifty telephones apiece. The telephone has not affected the transaction of busi-

ness alone. In the larger cities almost every apartment house and private residence has a telephone. The ordinary social telegram is practically a thing of the past for short distances, having been supplanted by the telephone, and an increasingly large amount of the daily shopping is done every year in the same manner. Indeed, so widespread has become the use of the telephone in the larger cities that the telephone book has become a comprehensive business directory, besides containing the residence address of thousands of persons who keep telephones in their houses as well as their offices. Publishers admit that the greater convenience of the telephone book has seriously affected the sales of city directories during the last few years.

One of the interesting outgrowths of the telephone is the theatre-phone, which is an arrangement whereby a person can hear all that goes on in a theatre or opera house by sitting in his home with the specially arranged double receivers at his ears. Experts have been experimenting with the theatre-phone for several years, and have so perfected the system that it is possible to hear distinctly the lowest stage whisper or the softest note of an opera. The question has been seriously considered by one hospital in New York of installing theatre-phones in every room. During the week the patients can hear the various operas and concerts, and on Sunday connection can be made with a church of any denomination and the patient can hear the sermon. It is thought that this would greatly aid the recovery of patients, besides softening the loneliness of incurable invalids. The practicability of the theatre-phone has been thoroughly demonstrated,.

the only objection from the standpoint of the telephone companies being that if in general use it would tie up so many trunk lines as to seriously interfere with the regular service.

A company has been organized in New York to furnish electric music to be transmitted through the telephone to the homes of the subscribers. Strings, reeds, and other devices with which we have been accustomed to sound our notes are dispensed with. There are a battery of alternators, which will transmit musical electric waves, and these are adjusted to as many different vibrations as are the strings of a piano. To play the instrument a piano keyboard is used. The pressing of a key operates a switch which closes the circuit leading to the alternators adjusted to produce just the note that the piano would produce. The wood-wind, brass and string tones of an orchestra are easily produced. Musicians who have heard the quality of the notes say that the delicacy of expression is remarkable. By the touch of the hand the performer controls the attack and sostenuto and varies the note at every instant. The imitation of the violin and 'cello is so perfect that the auditor can hardly believe that he is not listening to the bow gliding over the strings. The notes are not sounded in the ear of the performer operating the battery, the vibrations instead being communicated to the telephone wires which transmit them to the

telephone receiver. There the note is sounded. The receiving telephones are fitted with a megaphone-like device which carry the notes through a room as well as an organ could. One of the receiving telephones is connected with the operator, and he can thus hear how his playing sounds. In case of a large hall several instruments could be used, the fact that the notes having the same origin they would blend perfectly. The promoters of this company believe that eventually hotels generally, because of the very much lower cost, will install these telephones and use them instead of orchestras. It is also expected that they will be installed in private residences, when the subscriber can any evening call up central and order music for dinner or a dance or a concert for his guests.

Recently the telephone has been installed in restaurants so that it can be used by the patrons at any table. It is on the bill of fare and is ordered with other items. The Pullman coaches of long distance trains are also being provided with telephones which are connected by a jack and plug arrangement to the exchange system of the Bell Company whenever the train stops for a few minutes in a city, thus giving the passenger an opportunity to telephone. Thus it is possible for a business man, whether traveling or dining, to keep in close touch with his office and his family. 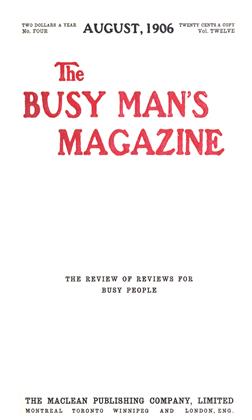