An Enterprising Man. Alfred B. Lamplugh in Royal October 1 1907

Alfred B. Lamplugh in Royal

THE scene was Euston Station, and the time two hours past noon.

Mr. Spennings entered a first-class smoking compartment of the express, and proceeded to make himself comfortable. Mr. Spennings was employed in the advertisement department of a firm that owned a wellknown patent medicine, recently discovered; and the object of his journey was to visit Derringham and to extend the connection of his firm in that hitherto neglected neighborhood.

Being a man of great energy and unusual powers of resource, he commanded a large salary, which enabled him to indulge in those little luxuries which made life pleasant. So he always traveled first-class, frequented the best hotels, and was faultlessly attired in the latest fashions.

The carriage was empty when Mr. Spennings entered; but just before the train started another passenger, a gentleman of about his own age and appearance, though not quite so good looking, got in.

The new arrival was attended by a servant in livery, who carried a rug which he deposited respectfully on the seat, and then retired to the door.

“I shall be back, if possible, by the seven o’clock train, Johnson,” said the passenger, “but tell Lady Carlton not to wait for me if I am detained.”

“Yes, my lord,” said the youth, automatically saluting as he withdrew.

The guard came along to examine tickets. “Change at Bletchy for Deringham,” he remarked, impartially, to both the occupants.

So Mr. Spennings not only discovered that he was traveling with a real, live lord, but also that they were both going to the same destination.

This was interesting; and, as Mr. Spennings lighted a cigar to aid him in his reflections, his companion followed suit, drawing his Havana from

a dainty leather case, stamped with a silver coronet.

Mr. Spennings, who had never been to Derringham before, was unable to conjecture what business his companion could have in that locality; but, as he glanced over the morning paper, he saw a paragraph announcing that the foundation-stone of the new Cottage Hospital at Derringham was to be laid that afternoon by the Earl of Carlton.

Mr. Spennings felt more interested than ever, not knowing to what extent the local festivities would interfere with his own engagements.

“Derringham is a quiet little place, I believe,” he began, in his most insinuating tones.

“I suppose so,” was the answer, “but I have never been there. This is my first visit.”

“You are going to lay the foundation-stone of the new Cottage Hospital?” remarked Mr. Spennings.

“Yes, I am. But how did you know that? I presume you reside in the neighborhood ?”

“No,” said Mr. Spennings, “but I have just read it in the paper. I believe I have the honor of addressing Lord Carlton?”

“Yes, that is so. I have been requested to lay the foundationstone, though I am entirely unacquainted with the district, but the people down there have pressed me very much, knowing that I am interested in all such charitable institutions. I am doing it, however, at great inconvenience, having many important engagements ; and, moreover, I do not feel at all well to-day.”

“I am sorry for that,” said Mr. Spennings, with sudden professional interest ; “perhaps it is a case of overwork.”

“No,” replied his lordship, “I am afraid it is a question of the liver, which often troubles me.”

enthusiasm, “that is easily remedied. You should try Perkins’ Persuasive Pills. They are the very thing for the liver and are infallible. I have a box here ; let me offer you one.”

“No, thank you,” said the Earl testily, “I never take any patent medicines.’

“But, my dear sir—my lord, I mean,” urged Mr. Spennings, “these are of really marvellous efficacy, and are having an enormous sale.”

“Never heard of them,” said the Earl.

“But they are advertised everywhere.”

“Oh, I never read advertisements, and have a horror of all quack nostrums.”

Mr. Spennings was deeply hurt, and the Earl was evidently annoyed by the intrusive attentions of his companion. So they both relapsed into silence.

Now, whether it was with the object of avoiding further conversation, or the result of his liver being really out of order, it came to pass that the Earl wearily closed his eyes and ensconced himself in the corner.

And it further came to pass that, when the train drew up at Bletchley, his lordship was fast asleep and oblivious of all surroundings.

Mr. Spennings’ feelings had been outraged by his companion’s supercilious rejection of his proffered remedy; and so, after a momentary conflict of emotions, he quietly opened and reclosed the carriage door, and watched from the platform the express receding in the distance on its next seventy miles run, bearing away the unconscious body of Lord Carlton.

“I shouldn’t be surprised if he sleeps until they get to Crewe,” said Mr. Spennings vindictively. “It serves him right for his obstinacy. One of the Persuasive Pills would have kept him awake anyhow.”

The branch train was waiting in a siding; and after a short interval Mr. Spennings reached Derringham.

Here he found the station decorated with flags, and a group of expectant people assembled on the platform.

Standing in that momentarily irresolute way which a man adopts who arrives at a station for the first time, and does not precisely know the way out, Mr. Spennings found himself slowly approached by an elderly gentleman wearing a chain of office, which plainly denoted him to be the mayor of the town, and who addressed him thus :

Now, here an enterprising thought suddenly entered Mr. Spennings' breast, and he instantaneously resolved on a daring mode of action.

He raised his hat, and bowed profoundly in response to the Mayor’s obsequious salutation. That functionary led him through the gaping crowd to a carriage and pair, in which a smartly dressed lady was seated, who, it appeared, was the Lady Mayoress, and who nervously greeted Mr. Spennings with great cordiality.

They drove through the gaily decorated streets to an inclosed space, where a lavish display of bunting and a large marquee clearly denoted the site of the proposed new Cottage Hospital.

Here the Mayor introduced several prominent local dlignitaries to Mr. Spennings, all of whom were charmed by his extremely affable manner. The usual preliminaries having been gone through, Mr. Spennings proceeded to discharge the important function of the day.

“I declare this stone well and truly laid,’ he said, tapping it with the silver trowel three times in a workmanlike manner.

And then, in the presence of the interested assembly, and half-a-dozen representatives of the local press, he delivered a brief speech, which was interrupted by frequent applause. However, the part of his oration which especially riveted the attention of his hearers, was its conclusion, which was as follows :—

“But, ladies and gentlemen, though institutions of the kind of which I have this day with so much pleasure laid the foundation-stone, are undoubtedly great blessings, yet they possess for us a melancholy interest.

They are doomed to pass away, or at any rate to be turned to other purposes. The time is rapidly coming when Cottage Hospitals will be needed no longer. They will survive only as interesting relics of a comparatively barbarous age, for the advance of science will render them unnecessary. The latest development of human skill and profound research—I allude of course, to Perkins’ Persuasive Pills, that marvellous discovery about which everybody is now talking—has begun a revolution of which it is impossible to see the end. When the use of these pills is universal, which I venture to predict will speedily be the case, then the prevalence of perfect health among all classes of the community will render such institutions as that which I have been inaugurating this day superfluous. But, ladies and gentlemen, our labors will not be altogether wasted. These noble buildings can easily be converted into public libraries, museums, or reading-rooms. And so it gives me an additional pleasure to feel that I have this day been assisting in establishing an institution which will be a permanent benefit and ornament to your town, when the needs for which it was primarily designed have all vanished; and when health and happiness have been assured to everyone by those simple remedies, whose discovery is no doubt the most significant and important event of this memorable century.”

Mr. Spennings resumed his seat amid general applause, the consternation of several local medical practitioners, and the disappointment of the reporters, who were taking down his speech verbatim.

As the rector rose to move a vote

of thanks to Lord Carlton for his kindness in coming among them, a telegraph boy was seen wandering perplexedly in the front ranks of the assembly, and bearing the usual orange-colored missive.

“For me, I presume,” said Mr. Spennings promptly and decisively, stretching out his hand for the envelope, which the flurried boy was only too glad to relinquish.

It was addressed to the chairman of the Cottage Hospital, Derringham, and ran as follows :—

Handed in at Stafford Station Office. Extremely regret have had mishap with train. Am afraid cannot possibly be with you to-day. Much distressed. Pray apologise for me.— Carlton.

“This is very unfortunate,” said Mr. Spennings to the Mayor; “I have had a telegram from Lady Carlton, on her way from Scotland, saying she has missed her train, and cannot join me at the Mansion House this evening, where I have an important engagement. I am afraid this will necessitate my leaving for town even earlier than I anticipated.”

As Mr. Spennings went back to town, he reflected : “What a delightful thing it is to be a peer ! I shall never refuse the honor when it is offered me. And I have done a good day’s work, too. The foundationstone is well and truly laid ; and I don’t think either the Earl of Carlton or the people of Derringham will soon forget Perkins’ Persuasive Pills.”

And they didn’t. True, there were a few complications when Lord Carlton’s explanatory letter to the Mayor arrived on the next morning—but that is another story. 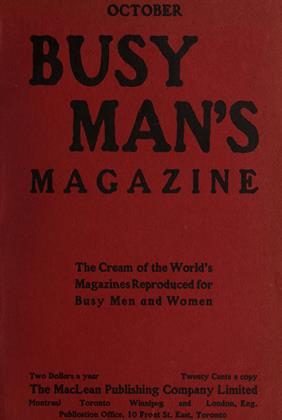