What Men of Note Are Saying

Click to View Article Pages
What Men of Note Are Saying

What Men of Note Are Saying

IN all walks of life in every quarter of the empire you will find today men content, more than content, eager to endure any hardship, any misunderstanding, for aims that are not even remotely theirs, for objects in which they have no specific interest except the honor and integrity and advancement of their village, their town, their state, their province, or their country. Now, the history of Canada, of all young nations, as I read it, is the record of just that spirit, the story of just those men, the pioneers who rode out in advance of the community, and who broke the trails for their brothers’ use. And we are so new even now that in every quarter of the empire to-day you can see those pioneers putting forth on their quests. Behind them lie little towns, collections of shacks or tin-roofed houses, where they buy their trading outfit and their trading goods. The men you know, the men who live in them, will tell you seriously that in a few years they will be second Torontos, second Johannesburgs, second Wellingtons, second Melbournes, as the case may

be. And we laugh, knowing how miracles are wrought on our own behalf. We cannot conceive that they will be wrought for anyone else.

But we do not laugh a few years later when one of those lonely pioneers rides up to us, the Mayor of his city—no mean city—and well on his way to be a millionaire. We laugh still less when his city writes to our dearest hated rival and wishes to know how soon he can deliver a million and three-quarters city water mains, with pipes and sewers, as per specification appended. Then we mourn. Then we grieve. Then we say to ourselves if we had only known, had only guessed that that dear little jumping-off place to nowhere was going to be what it is we would have paid it some attention, we would have had more faith in it; and then we would be sharing the contract. But we have only to meet another man, and we go straight away and make the same mistake, laughing at this man on another pony, hailing from another collection of houses which will be another city. 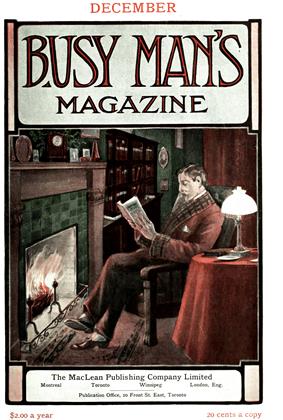