Mr. Tom Browne, the celebrated English humorist, uses his gifted pen to illustrate the humors of life in Chicago as seen by an Englishman.

WHOEVER it was that first remarked "Chicago is like hell with the lid off” has my approval. I am not familiar with the region to which Chicago is likened, but my imagination tells me that Chicago must resemble it. Have you ever heard the story about the Chicago millionaire who dreamed that he died and went to heaven? He remarked on arrival that it was a great surprise to him to find that “heaven was so like Chicago.” “Excuse me.” said someone at his side, “but this isn’t heaven!”

Of all the civilized cities I ever struck, I believe Chicago is the toughest. I will be perfectly frank. I do not like Chicago. It is an extraordinary mixture of a civilized eastern city and a rough western mining camp, except that in a western mining camp justice would be done by shooting as sight the crimes that are committed almost every day in Chicago.

Chicago has over 2,000,000 inhabitants, composed chiefly of Americans, Germans, Irish, Swedes, Poles, Bohemians, Italians. Russians, Hollanders. Roumanians. and Hungarians. It covers abr,ut 1}85 square miles. It is about 20 miles long from north to south, and is bound on the east by Lake Michigan.

Were it not for the lake, and its cool breezes during the hot summer months, Chicago would be unbearable. When the hot wind comes up from the south and south-west the humid heat is killing, bringing with

it the dirt, smoke, and sickening smells from the stockyards.

The city proper, which is confined to a very small area, contains very fine stores, clubs, and one or two decent hotels, and also the worst paved, ankle-twisting streets I ever trot upon. Along the north and south shores lie the aggressive palatial mansions of the bloated millionaires and others of Chicago’s upper crust.

Chicago is a great railway centre, and the infernal noise and din of clanging bells and shrieking whistles keeps one awake o’ nights. I stayed at the one decent hotel on the lake front for four nights, and hardly got a wink of sleep during that time. The incessant shunting of trucks which took place underneath the hotel windows, the doleful clang, clang of the locomotives and the shrill, ear-splitting screams of whistles nearly drove me crazy. If one closed the window to shut out the sound, the air became stifling. Finally I cleared out and went to live at a charming country hotel along the north shore, about thirty miles from the city. There I found peace and quietness in a way.

The municipal government of Chicago is mainly in the hands of the Irish. The Irish policeman is an interesting study. He is ,big. and well fed. With tilted helmet and swinging .club, he is the autocrat of the streets. Stout, careless, wearing ill-fitting clothes, with the free and easy Irish way, his Irish eyes

twinkling at a joke or lighting up with the lire of grim strife; swinging his long club or lolling gracefully against a barrel of apples with club tucked under his arm, he may be seemingly half asleep, but is ready in a moment if there is a light about, and a chance to use his club or pull his “gun.”

The local government is shockingly managed, as possibly you have heard before. There are not enough police for this great, overgrown schoolboy of a city. The amount of gambling, drinking, “doping,” and other vices which flourish under the eyes of the police is enormous.

The lawlessness of Chicago is astounding. Thugs and garrotters sneak out of dark alleys after dark and hold up citizens at the point of the revolver. The slightest resistance means a bullet or a smashed skull for the unfortunate victim. It is absolutely unsafe for women and girls to be out alone after dark except in the well-lighted streets, and not always there. Cases occur almost every night, and even in broad daylight, of women and young children being dragged into alleys and cruelly assaulted. It is no uncommon thing to see a robber being chased through the streets by policemen blazing away at him with their “guns.u Then, too, I don’t think I ever saw such badly paved streets as those I saw in this city. Without any exaggeration, there were holes in the streets that one could dron a small-sized trunk into comfortably !

Several good plays carye to the city while I was there, but to me they were often spoilt by the introduction of a caricatured Englishman. If there happened to be an

English character m the play he was always made to appear like an out-and-out idiot. No matter whether he was an earl or a butler, he drawled and dropped his “h’s,” and spoke like a Billingsgate porter with an atrocious Cockney accent. Any little slap at “Johnny Bull” was always received with great glee and amusement by the audience. This got my back up so much at times that I was inclined to howl the players off the stage.

I paid three visits to the stockyards and packing-houses, the scene of the recent disclosures. The three houses I visited were the largest and best known—Armour’s, Swift’s, and Nelson Morris’s. The slaughter-houses are not nice things to see, but they are very interesting. The system they have of getting through the work is amazing. Every worker has his own particular bit of work to do on the carcase. To see the live hog, sheep, or bullock driven to the shambles and turned out at the other end of the building as canned meat is one of the “slickest” things I ever contemplated.

With regard to the cleaning, cooking. and packing, everything seemed to be done in a cleanly way, and I wras surprised at the outcry that has been made in the matter of these packing-houses. Of course things might have been carried on very differently before I went there. I visited the place after “The Jungle” had caused such a sensation.

There were signs of almost comic haste in the way in which the houses were being tidied up. Floors and walls were being cleaned, and one noted the new uniforms and caps of the packers, carpenters, and plumbers, hard at vork on all sides.

The district which lies immediately behind the stockyards is known as Packingtown, or Back of the Yards, a very unsavoury locality where live the people, mostly aliens, who work at the stockyards. Filthy, muddy roads, rickety board sidewalks, and tumbledown frame shacks and shops abound, almost every other house being a saloon. A tough-looking district, and not one that I would care to walk alone in at night.

On the other hand, the social clubs in Chicago are very fine and spacious. They are generally handsomely decorated, and contain fine pictures, usually badly placed.

'■ Most of the better-qlass people fly to Europe and the summer resorts and country clubs during the hot summer months. The summer girl is a gorgeous butterfly, well dressed, neat and assertive. As a rule she has a good figure, ana unhappily she is intensely aware of it. She is rather loud and rowdy sometimes, and often somewhat free in her manners, with an ignorant contemptuous pity for the poor English girl, who is supposed to obey the beck and call of the autocratic Englishman.

Chicago is a delightful place to get away from. That, so far as 1 could discouver, is its only charm. Railroads and lake steamers take one quickly away to the most delightful summer resorts along the lake, or the fishing lakes and hunting districts of Wisconsin and North Michigan.

Men work hard in Chicago; at

least, they say they do. The one topic of conservation among them seems to be about the enormous amount of business they do and how they do it. The almighty dollar is the god of the Chicagoan. The length of his purse is the sole measure of a man. The 1 ‘ get-rich-quick ’7 craze is in full working order out there, I can assure you.

Beautifully appointed sky-scrapers tower through the dirt, smoke, and grime to the sky. They .are alive all day with myriads of people pursuing the almighty dollar. Men fight and pound away at each other in these busy hives, piling up the coin whilst their womenfolk loll lazily in hammocks or rockers at summer hotels and encourage them to greater efforts.

The American man is a slave of two deities: The Dollar and the Goddess Woman, which he has placed high on the pedestal. I mud confess that there is more courtliness and gallantry shown by the men to the fair sex there than I see in my own country; but, equally, they spoil their women tremendously.

The younger generation in Chicago is going in more for sport nowadays. They work hard and play hard. Golf is very popular. Beautiful links are scattered round about Chicago. Up at Lake Forest they also plav polo, and even have a pack of English foxhounds, and hunt the aniseed-bag twice a week during’ the hunting season, with ton h at and 11 ni nk* ’ al 1 . comple te.Lt is a brave show ami the .gaily pressed ladies flutter and shudder . as..tbe daring riders Hte the dust. 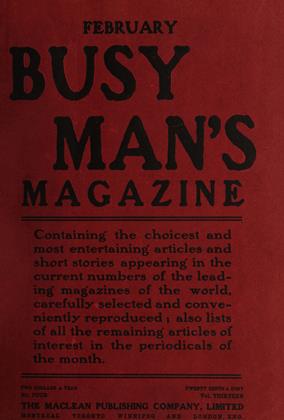