There are many business people who are ever ready to make any sacrifice in order to show their patrons every court sy possible but who seem to forget that those in their employment or members of their home are entitled to this same consideration. On the contrary they act sometimes as if the.-e latter were responsible for the vexati ns and disappointments of business. To such people Mr. Marden offers in the following article some food for reflection.

IF business men were to throw off self-control in their offices and places of business as many of them do in their homes, and say the same mean, contemptible, unguarder things to their customers that they say to the members of their own families, their business would soon go to pieces.

No good business man would risk his reputation, or the welfare of his business in such a way. He knows better than that. He knows that it would be fatal. When he is away from home he thinks too much of his reputation to risk it for the sake of gratifying his spleen, and he is always on his guard, for his pride is touched. He thinks too much of himself. His egotism, or vanity, prevents him from making a fool of himself, and so he practices self-restraint wherever his reputation is at stake; but at home he does not eare. He knows that his wife and children will try to protect him, and he does not hesitate to show the hog in him.

There are thousands of men who are polite, tactful, diplomatic toward tlieir customers, and in everyth"1 which bears upon their business, who seem to lock their good manners up in their offices at night, men who are known as Dr. Jekylls in all their

business or professional relation^, but who assume the character of Mr. Hyde as soon as they enter their own homes, where they feel at liberty to ride rough-shod over everybody’s feelings. They do not seem to think that the wife, or any other member of the family, gets tired, has “nerves,” or troubles of any kind. They exercise self-restraint all day, but the moment they get home they seem to vent their bad humor on everybody, even on 'the dog or the cat. Is it not a strange thing that so many people think that home is not a place for the exercise of selfcontrol. but take it for granted that there they can abuse everybody without restraint?

Why should a man who is polite and politic in business, and in his club, who can control himself elsewhere, use his home as a kicking post, a place to get rid of his bad blood —a place which, of all olthers, ought to be the most sacred, most peaceful, and the sweetest place in the world to him ?

Many a thoughtless parent leaves a depressing influence upon some member of the family, in the morning, the shadow of which hangs over the life all day. It does not matter that it is a thoughtless, heedless word flung out in impatience, its thrust is

just as painful. Tongue thrusts are infinitely more painful than blows from the hand.

If, on his return, there is company at home, he is just as suave and tactful as in his place of business. He defers to his wife's judgment, and is very kind to the servants and children, because his reputation is at stake. He cannot afford to take chances with that. Outside people might spread his hoggish qualities, gossip about his meanness, and injure or humiliate him, while the members of his household would feel under a certain obligation to take everything in silence, to protect his name.

As soon as the guests go, however, this type of man grunts and growls, snarls and nags and finds faults, until he works everyone within sound of his voice into a state of nervous irritability. Then he finds fault

with them for not being more

There is no one thing more fatal to that dignity of bearing, that refinement, that personal grace which commands respect, than this habit of dropping all standards of ordinary good behavior and conduct in the home. It fosters a vulgarity which is very demoralizing to all the laws of character-building and right living. This easy-going, slipshod manner of living, as practiced in many homes, tends to the loss of self-respect for one another.

How can you expect the respect of 'the members of your family, or of those who work for you, when you do not show any sort of respect or deference, or kindness, or con-

sideration for them, and when you act as though anything was good enough for them'?

One cannot be a lady or a gentleman some of the time and a bear the rest of the time without making unguarded slips. What we do habitually we tend to do all the time. Company manners are very dangerous things. Those who practice them are always betraying themselves. They are like good clothes that are worn only occasionally,—the wearer never becomes sufficiently used to the seldom-wrorn garments to feel easy and comfortable in them, and is all the time betraying the fact. Like clothes, which must be worn often enough for the wearer to become unconscious of them, good manners must become so 'habitual that we shall practice them spontaneously arid unconsciously.

Many a man who is very deferential to society women, treats the girls of poor women who happen to be dependent upon him for a living, very shabbily. In society always on the alert to show ¡the slightest service to the ladies, he is absolutely indifferent to the comfort and feelings of a stenographer or other woman in his employ. Those who are bound to him by the necessity of earning their living, do not call out his nobler sentiments. He regards them as “just help,” nothing more. They may be infinitely finer grained than himself, but he rides roughshod over their sensitive feelings, domineering, criticizing, mercilessly scolding, even using profane language.

Such a man would be terribly

shocked if those to whom he is so deferential in, society knew how he treated the women in his employ. They would not believe it possible, —if they could be in his office, store, or factory for a day—that the man who displays these coarse, brute qualities, could ever be the polished gentleman they met the evening before. Think of a woman, perhaps with a gentle, delicate training, a woman of .culture and rare refinement, and who has seen better days, but whose changed circumstances compel her to earn a living for her little ones, enduring the ill-humor, submitting to the insulting remarks, the coarse and cruel treatment of such a man! How little he realizes that his own sister or his own wife may possibly be placed in a similar situation !

People ought to be rated by their quality. Many a refined, cultured, sweet, beautiful girl, for a few dollars a week, works for a brute of a man who pays not the slightest heed to her sensitive feelings, never hesitates to wound her, to say disagreeable and most contemptible things

to her, and often abuses the most abusivè, profane language!

What right have you to abuse an employee, just because your dinner did not happen to agree with you, or because you dissipated the night before and feel cross and crabbed1? Why should you humiliate, insult,'or make innocent people suffer for your shortcomings *?

You should remember that others have rights just as inalienable and just as sacred as yours, and you have no more right to lash an employee with your tongue, or to abuse an employee just because you happen to be in an unfortunate mood, than you have to strike him. The mere accident of your being an employer and he an employee does not give you any license to abuse or insult him. He has just as much right on this earth as you, and more if he behaves better. Many an employer who struts around in fine clothes and makes a great noise in the world, and who abuses his employees, is infinitely inferior to many of those who work for him.

I believe that the road to success in every department of life is only to be discovered by diligent searching. In other words, if we were only watchful and strenuous enough we might all discover opportunities of advancement, hitherto unsuspected, which we might seize and use to our continuous and increasing good.— Edwin Pugh. 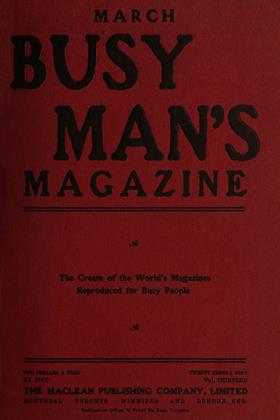