IN those cities in Canada where the Chinese have settled in large numbers, they are remarkable for their commercial aptitude, while in political and labor circles they are noteworthy for asking less for their hire than the average workingman. Because of the former attribute, they are admired, and because of the latter deficiency they are despised. Still, the Chinaman may easily be a power in the world. Though not as aggressive as the militant Jap, he has characteristics no less progressive and innate faculties and intellectual abilities that might bring him to the fore in the world’s commercial, diplomatic and political circles, were he but to make the effort. And the formation and expansion of the organization which has for its prime object the adoption of Occidental methods and customs, so that they may cope with the rest of the world, indicates, perhaps, at what the modern Chinaman is aiming.

China has never been remarkable for her intercourse with the foreigner, no matter of what race or religion the intruder may have been. Commerce in China has been carried on for ages and ages, and that she has been able to remain integral when nation after nation has passed away is sufficient recommendation for the resources of the country and the ability of the people.

Even to-day, years after the restless pioneer has been stopped on the Western coast of America by the Pacific Ocean, missionaries only are known in the interior' of China, and that not far from the seashore. White men are forming part of the industrial life in Japan or Corea, but in China they have secured but a slight foothold. The first foreigner to enter the domains of romantic Cathay was a missionary from Europe, and while he and his associates and followers were there for a considerable length of time, they eventually disappeared and for ages after Cathay was again a strange region. When China appeared on the horizon, it was discovered that this was the same country. Time after time, the commercial trader has endeavored to enter the unknown territory, and though a fairly large trade is now done with the Orient, it is very little compared with what is possible in the opinion of those who know what is in the country. The Chinese, while a great commercial people, (and it is doubtful if any single nation has this characteristic more predominant), are remarkable for the fact that they trade amongst themselves. That this is possible in their own country shows an extensive and diversified range of products. Even the Chinamen in Vancouver, Victoria, Seattle, San Francisco, traders still in their

adopted country, maintain their greater commercial relations not with the people among whom they dwell, but among themselves, and between themselves and the homeland. That is why Oriental trade is slow in expansion, and though commissioners may be sent by governments with the hope of developing commerce little will result until the conservative elements of Chinese character have begun to give way before the progressive enterprise of the modern generation which has observed what is possible by contact with the Occidental and his methods. It cannot but be noticed that what trade there is between other nations and China is not because of effort on the part of China herself, but rather as a result of the advances, one might almost go further, the demands of the aggressive commercial spirit of the whiter races. China has desired to remain within herself, and in cities on the American continent no other immigrants have been stronger in their cohesion.

Personally, the Chinaman is as sauve as the most accomplished diplomat, and sociable and friendly to a degree. The instinctive fighting element in his nature has been quieted and is almost extinct, since he is

the progeny of commercial generations. This could not have been better illustrated than during the riots in Vancouver in September, 1907, when the Chinese and Japanese were put on the defensive. The Japanese, when they became aware of what the rowdies were doing, immediately seized what arms they could find—revolvers, clubs, bricks, bottles, in short, anything and everything, marshalled their forces, placed sentries/^nd, when an alarm was given of the approach of the foe, rushed forward and attacked with vigor. Not so the Chinese. The domestics were called in from the private residences, the cooks from restaurants, the employes from the mills, and they retreated to their own particular section of the city, barricaded their doors, and while armed they only retained their weapons to use them in the last extremity if attacked, not to sally forth with the intent of battle. When it was announced that danger was passed, the weapons were laid aside. There was no subsequent talk of having to disarm the Chinese, although the Japs are still mentioned in that connection.

On the Pacific Coast the cry has gone up against the Chinaman. The reason is that he has found a market for his labor. Wages have been high, domestics scarce and white

men unwilling to do what he is ready to perform, and when the Chinaman offered his services at a half rate, those who wanted him badly accepted him gladly, and even those who were opposed to encouraging the advent of an alien nation were often unable to get along without him. So now it is a cry against the Chinaman, against the Tap, against the Hindu, against the flow of unskilled laborers from Asia where they are to be found in millions. The coolie class which has come to fill these necessities is of the lowest, living on little and that not of the best, to whom a few hundred dollars is enough to enable him to return to the land of his fathers and enjoy his days in peace and plenty.

The Reform Association Chinaman is of a different stamp. He cuts his hair “a la Melican man,” sends his children to the Canadian schools, reads the English papers, talks English, and is gradually becoming a factor in general affairs. He looks with pity bordering on derision on the traditions of his ancestors, who declared that modern methods were not needed, and anticipates the day when crude and antiquated apparatus will disappear before present-day machinery, and China will be a land of

humming enterprises and industrial prosperity. For all of them love their native land, and none more so. This is demonstrated by the frequent shipment through Pacific ports of the bones of some deceased son of the Flowery Kingdom, who has died in foreign parts, and whose wish was that his remains should be sent to mingle with the soil of the land where Chinamen have lived and died for centuries and centuries.

With the increase in membership of the Chinese Reform Association will come greater opportunities for other nations in China, and with opportunities will come advantages. This organization is very strong, and its importance is such that it is a recognized factor in Chinese imperial politics. The open hand to the people of other nations will be followed by the open door. Americans have been quick to perceive the gradual change in conditions, and Canada is not too far behind, for she has a trade commissioner in Hong Kong. To secure business, some one must be on the ground. The greatest amount of trade is now done with the coast cities of China, since there Europeans and Americans are located, but the lines of commerce are being pushed steadily inward. Progress is slow at first, but as commerce expands new avenues will open, and a substantial trade will develop if attention is paid to it. During the recent slump on this continent, the lumber manufacturers of the Pacific Coast, the demand for their product in the Prairie Provinces falling off, turned to the Orient, and the mills in Vancouver and Victoria were able to ship a number of lumber cargoes to China. During the good times previous to the slump, the home markets kept the lumbermen so busy that the Orient was overlooked, and only when business was needed was it sought. To build for the future, nothing should be overlooked for the immediate present. The business should be constantly attended to. not rushed for in an extremity. Tn such a case it might be found that others are in the field. Moreover, it must be remembered that in dealing with the Chinese, strict and honorable methods must be employed, for although ostensibly heathen, the moral business code of ethics is the same between Chinaman and Canadian as between ordinary man and man.

than any other of the countries on the Pacific Coast to secure the benefits of Oriental trade, which all foreseeing men declare will develop. The lines of inter-communication bring the world’s markets closer to China through Canada, as has been demonstrated more than once, when the Canadian Pacific Railway Company has delivered cargoes in Eastern America days ahead of competitive companies via San Francisco or Seattle. Another transcontinental line eastward from Prince Rupert will give what is stated to be a shorter route from Hong Kong to New York, and through trade will bring local business, all of which will add to the increasing prosperity of the Dominion.

When at last the Orient is free to the merchant, though a decade or more may elapse before that has eventuated, it will be found that having had the Chinaman established in Western Canada, will be of great assistance in promoting international relations. Those already here will have become a part of the Dominion, and will form the connecting link as it were between the two countries. Racial animosities may not then be so keen, and the people on this side of the Pacific may by that time be more eager to engage in those peaceful pursuits which have enabled the Chinaman himself to withstand so long the press of surging nations. 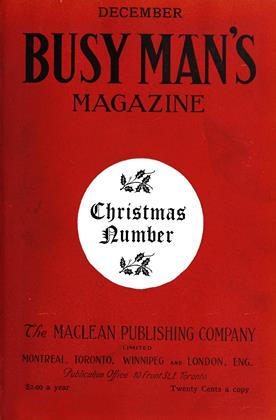