FOR months during the year 1810 the people of the Long Reach Settlement in Prince Edward County had been harassed by the ravages of a vicious wolf. Sheep, cattle and even dogs fell the prey of its rapacity. Some called it mad, and mad it must have been, for everything bitten by it, that succeeded in escaping with life, was seized with a sort of hydrophobia.

But the older people shook their heads and whispered ominously. When before had a wolf ever been known to leave the pack and venture out alone in daylight? Besides it

was summer now, instead of winter, and the wolves could find their prey in the great forest surrounding the tiny settlement. Then they talked, in an undertone of witches and wizards entering into the bodies of animals, and what animal more likely to be chosen than a wolf? Who had not heard of a wehr-wolf? And was not this one? They hinted darkly of the doings of old Sal Murphy, the witch, of her meetings with the devil on the brow of the high hill, overlooking Grassy Point. They made mystic circles around their cattle pens. They mumbled charms and intoned weird incantations, for they were all superstitious, and who can wonder that such was the case? Buried alive, one might say, in the depth of a dense forest, with no schools, and possessing few books, their minds craved mental food, and sought in a blind way for gratification. The human mind bewildered is ever superstitious, and so these poor exiles listened to the voices of Nature and attempted to interpret them. They studied the flights of birds. To them the white blur in a candle or the ticking of an innocent spider in a wall, were messages of warning from the great beyond, that enwraps the visible universe. Belief in ghosts, spooks, and witches was general, and in the Long Reach Settlement many were the stories told in awed voices, around blazing fires of the “deviltry” of old Sal Murphy, a poor, wizened old creature who lived on the outskirts of the clearance. Hence, when the wolf appeared on the scene speculation was rife, but notwithstanding all their charms the ravages continued. The younger men banded themselves together and scoured the woods, but the beast seemed to bear a charmed life, and their efforts were in vain. No bullets touched it and finally the best shots in the settlement were obliged to acknowledge themselves baffled. Then the murmurs against Sal Murphy grew louder and more vehement. Nathan was the “crack shot” in the Settlement and if a silver bullet was the one thing needed, the wolf would do well to seek another field for its nefarious business. “Mother, I could beat ’em, I believe, when I was young,” he cried enthusiastically. “They run well but Lord, how we ran when we charged the Yankee rebels at Brandywine. Just look at them go! See that, now.” Bang! The silver bullet hissed through the air. The wolf leaped madlv. Its front paws clawed and beat wildly about. A horrible, gurgling, unearthv growl issued from its hot throat. A moment—and it rolled over at the feet of the horses.

“She’d ought to have her cussed old neck wrung,” said Nathan Walters, the carpenter of the Long Reach, as he charged his musket.

“Be careful, Nathe, or she’ll ’witch you,” laughed Tom Norton, the cobbler, “Peggy Harper saw her looking at little Gyp t’other day, and last night the poor little thing was carried off. Peggy’s sure it’s Sal. I tell her I don’t believe it, but it seems mighty strange we can’t shoot the thing.”

“Shoot it!” exclaimed John Walters, the pioneer, as he entered the workshop, “I’ve told you boys time

and ag’in, you can’t kill a witch with lead, you’ve got to have a silver bullet.”

Nathan put his hand in his pocket. “Silver it is then. The thing’s got to die,” he said. “I haven’t much money but here’s a few shillings. Take ’em and melt ’em up.” Joyfully John went to work, but the shillings proved as stubborn as old King George himself, whose impress they bore. The long June day dragged on. Slowly it crept toward evening but still John bent over his task Presently, however, he called the boys in from their work and proudly turned out of his bullet mould for their inspection a shining silver sphere.

The young men turned the ball over in their hands like connoisseurs and commented on its smoothness and perfect shape.

“Haven’t cast a better bullet in years,” said John gleefully, as lie handed it to his son.

Nathan slid the bullet down the muzzle of his musket. “Guess that’ll pay Sal’s way to the place where she belongs.” he laughed.

“Nathe. do you believe old Sal’s in that wolf?” he asked.

“Well, then, won’t it seem like murder, your killin’ it?”

Meanwhile John Walters was making curious passes through the air with his hands, and muttering to himself.

“Why it’s a charm I learned from the old Dutch doctor. It’ll bring the wolf out in short order.”

“What fools we are,” said Nathan.

But by strange coincidence, as he spoke a ferocious howl sounded near

the workshop. “The wehr-wolf !” “The wolf,” cried the boys, their hunters’ blood instantly rising to boiling point, as seizing their muskets they started on a run.

Jane Walters stood in the door with her hands clasped together.

The Walters’ girls had rode on horseback that afternoon to visit a neighbor, and as they had promised to return home before sunset, Jane was anxiously watching for them.

“That silver bullet’ll do its work before the girls show up. Look look, mother, how those boys run ! Land sakes. it makes me feel young again to see ’em.”

John shaded his eyes with his hand and watched them eagerly. His face was shining when he turned to Jane the second time.

But Jane was wringing her hands together and moaning, “Oh ! dear heaven, the girls ! And the wolf so far ahead !”

The boys flew along like the wind. They vaulted over stump fences ; they dashed through underbrush and clearings ; they stooped ; they dodged fallen branches ; they cleared fallen trees at a bound; they laughed; they shouted; they panted; they beat all previous records made on General Training Day; but ever ahead bounded the gaunt, grey beast. Its eyes flashed fire, its tongue lolled from its hot, red mouth and greenish-yellow foam flecked its ugly jaws and lay in great blotches over its body. Tom Norton’s eyes danced.

“See her leg it for home ! The old vixen !” called out Nathan.

At each shout from her pursuers the wolf turned her head toward them, and her sharp fangs gleamed like polished ivory in the sunshine ; but still she sped on, and still they followed after. She ran through a cleared field and they gained on her. She cut through to the blazed road and they gained still more. Nearer, nearer, they strained every muscle to its utmost.

The chase was getting more exciting each moment. On, on they went, every instant gaining ground. Once they forged near enough that Tom Norton, who was a few paces ahead of Nathan, raised his musket and fired. The ball struck the bounding, grey side, a tiny red stream colored the foam about the ugly jaws, but that was all.

Tom stood still an instant, looking after Nathan and the wolf, still skimming along over the rough road He rubbed his brow in a dazed way, then with a joyful shout of “The silver bullet, Nathe! The silver bullet is the only thing that will

fix her, but be mighty careful,” he set out on a run again.

Nathan was gaining now, with straining muscles he swept along. He saw not the road he was traveling. His feet instinctively seemed to find the right places in which to tread, for his eyes were ever on the wolf, watching a chance at a vital spot. Fie had but one silver bullet and no risks were to be taken.

The long, level rays of the setting sun gilded the sparkling waters of the Long Reach, and touched with loving fingers the mighty woods on the low-lying shore across the strip of water. Softly the evening breeze stirred the tender leaves of June above the heads of the struggling young men, but only one bounding, grey foam-flicked body was seen by them. The whole universe for that one instant was centred in that one object; the next instant all was changed.

Nathan had been husbanding his breath, but the words came from him in a sharp, agonizing cry. Sure enough a short distance ahead they were coming, cantering along, and guiding their steeds with that grace and horsemanship, for which our early settlers’ daughters have ever since been famous. They heard the cry and looked up.

Just a few rods ■ ahead of them bounded the ugly brute.

“Shoot, Nathe, shoot and save the horses!” shouted Tom. “They’re done for if she bites ’em.”

The horses stopped stock still with braced feet and snorts of terror.

The girls sat frozen with horror.

Nathan raised his musket. Flis face was grey and expressionless. His bronzed hands gleamed white over the knuckles, so tense was his grip on the musket.

Such a moment comes but once in a life-time—the supreme test of our self-control.

Nathan sat down on a log and wiped his brow with his sleeve. He was shaking now like the leaves above his head. His nerves tingled like hot wires.

“Not bad,” said Nathan, dryly. A few seconds after he arose and walked to the dead beast, while Tom reassured the girls.

“Pretty lean for all its carried off

so much,” said Nathan, as he turned the wolf over with his foot. “I s’pose Sal’s run it most to death though,” he added meditatively.

He stood looking at it for some time, then raising his head: “Lyd, jump off your horse. Tom, you take the beast home, it’s worth the bounty, anyhow. I’m goin’ down to Murphy’s to tell old Jim what I’ve done.”

Ruth Walters looked up, and her sweet lips quivered as she said: “There’s no need, brother, go home and make a coffin. Poor old Sal died early this morning. Jim told me, and he is broken-hearted. Ah! she was no more witch than I am.” 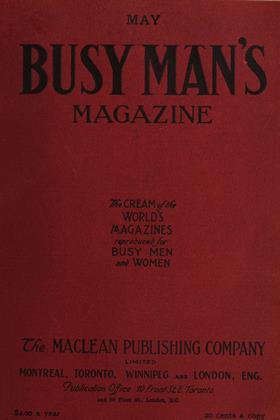