CONTENTS OF OTHER MAGAZINES October 1 1909

Concrete Ornaments and How to Make Them. R. C. Davidson1—American Homes and Gardens.

The Byrdcliffe Colony of Arts and Crafts. Poultney Bigelow—American Homes and

The Spirit of California Art. Mabel U. Seares —Sunset (Sept.)

The Story of Dutch Art—St. Nicholas.

Hitting Power of the American Navy—American Review of Reviews.

The Power of the Mercantile Agencies—Abraham

Are We Spoiling Our Boys Who Have the Best Chances in Life ? Professor Paul Van Dyke— Scribner’s.

The Value of Classics in Engineering Education —Outlook (Sept. 18.)

Arithmetic as a Science. Willard A. Bartlett Education.

The College of the City. John II. Finley—Van Norden's Magazine.

Training for Industrial Efficiency in New England—Advertising and Selling.

The Most Interesting Thing in the World. Rupert Hughes—Red Bool:.

Do It to a Finish. Orison Swett Marden—Success Magazine.

The Other Side of Mortality. Henry Mills Alden—Harper's Bazaar.

For the Man With a Grouch. Paul J. Barrett— Business Philosopher (Sept.)

The Theft of Truth—Young Man.

The Man Who Went Back. Woolsey R. Hopkins —McClure’s Magazine.

The Child of the Mist. Allan K. Stuart—Westward Ho.

The Romance of a Coal Dock. Charles Dorian— Westward IIo.

The Girl in the Bank. E. Mallett—Book-Keeper. Living Guaranteed to Every Honest Man. Anne Hard—Technical World.

The School Desk and the Health of Children.

How I Slept Out of Doors. Edith Hartley— Woman’s Home Companion.

Nervous Poise, and How to Get It. Rev.

Some Facts About Leprosy—American Review of Reviews.

Health and Athletics—Literary Digest (Sept. 11A

The Feathered Hyacinth. T. MoA.—Garden Mallow to Plant the Hardy Border in Fall.

An Historic House on the Hudson. Natalie Curti s—C rafts m a n.

Caring for Cannas and Other Roots During Winter—Am. Homes and Gardens.

The Most Powerful Ylan in America. Burton J. Hendrick-—McClure's.

The Wife and Son of Henry Hudson—New England Magazine.

What Are a Father's Rights ?—Ladies' Home Journal.

The Vampire of the South. Marion Hamilton Carter—McClure's Magazine.

How to Get a Title. Maude Radford Warren— Sat. Evening Post (Sept. 25.)

The Adventures of a Suburbanite. Ellis P. Butler—Country Life in America.

The Call of the Moors. J. Kingland—Pall Mall Magazine.

What New England’s Newspapers Can do for New England's Prosperity—Advertising and Selling.

Some New England Possibilities—Advertising and Selling.

The Municipal Problem : The Form of City Government—Outlook (Sept. 18.)

Safeguarding the Public Services : How the New York Commission is Working Out Its Task. J. S. Kennedy—Sat. Evening Post (Sept. 25.)

How a Library Woke up a Town. Sarah B. Askew—House and Garden.

The Tariff and the Next Campaign. II. L. West—The Forum (Sept.)

With the First Train Into Nyasaland. Mary Bridson—Travel and Exploration.

Are the Colleges Undermining Faith and Morals ?—Current Literature.

The Work of the Illuminating Engineer. D. C. Shafer—Am. Review of Reviews.

The Artificiality of Man’s Sense of Space—Current Literature (Sept.)

Some Methods of Fishing in China. Surgeon G. Moir—Badminton.

Larger Shore Birds, From the Sportsman s Point of View—Badminton.

Turkey Tracks in the Big Cypress. A. W. Dimock—Outing Magazine.

Some Dramas of tho Day. Louis I . De Foc Red Book.

The Stage And Its Feople. Annie Russell— Ladies' Home Journal.

The Business Side of the Theatre. Hartley Davis—Everybody's Magazine.

Farthest South : The Dash for the Pole. Lieut. Shackleton—McClure’s.

The Real New England of To-Day. George French—Advertising and Selling.

How An Explorer Can Know VThen He Reaches the Pole. Anthony Fiala—Travel Magazine.

The North Shore of Lake Superior. Martin Hunter—Rod and Gun.

A Successful Moose Hunt in Quebec. H. A. McCrea—Rod and Gun.

The Characteristics of a Fine Backwoods Guide —Rod and Gun.

Women and the Home.

Originality in the Decoration of Walls. M. B. Edson—Country Life In America.

The Librarian and the Woman’s Magazine—Woman’s Home Companion.

Furnishing the Nursery. Edith Haviland Am. Homes and Gardens. 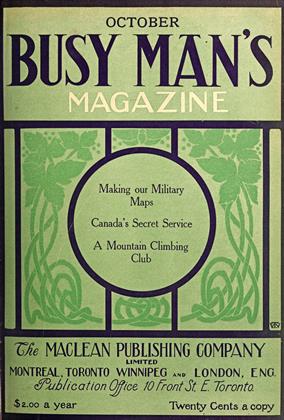