COMING in from my usual weekly jaunt on a Friday night, I boarded the train at London. Tired and dispirited, I wanted to settle down for a quiet read, but every seat in the passenger coaches was occupied. Reluctantly, I made my way to the smoking compartment in a last vain hope, and there I found a vacant spot. I do not indulge in the weed myself, and knew that when I landed home with my clothes saturated with smoke, so to speak, I would hear from my wife. I

was, however, not going to ride standing, and it was a case of Hobson’s choice—the smoker, or nothing.

I have often heard of the pleasant informality and agreeable companship of those who woo the pipe, and how tobacco—so kindred is its relations—levels all barriers and makes of its devotees that “fraternity of man,” over which poets in past ages have sung. Opposite me were two men that I did not know, although I judged from their general appear-

anee that they were apostles of the grip. One was a rather young, smooth-faced, dark-eyed fellow, with a pleasant speech, llis manner was interesting, his smile engaging. Evidently he had the art of mixing with men and feeling perfectly at home. Neatly dresed, he was smoking in an attitude of leisurely indifference, and the aroma from his cigar convinced me that it was not a cheap brand. He gave every outward indication of personal prosperity, and of having booked many orders for his house that week. His companion was considerably older, rather shabbily dressed, and wearing a soft felt hat, that had evidently been dug up in the woodshed. His eyes were heavy, his boots dirty, his linen soilel, while his face bore evidence that, for at least three days it had had no acquaintance with a barber or razor. He seemed restless and gloomy.

“Well, this is my last trip for the house,” he remarked somewhat disconsolately, as he filled a briar pipe and proceeded to take a pull.

“You don’t say,” declared his companion with interest. “What’s up now. Bill? You look as if you had a bad week of it.”

“Yes. I sent in my resignation three weeks ago—was asked to do so—and, of course, it was accepted. Why the manager called upon me to hand in my retiring ticket I don’t know.”

“Can't you give a shrewd guess?” asked his friend suggestively, calmly surveying the seedy looking Rill from head to foot.

“No, I can’t surmise at all,” was the response.

“Who have they got in your place?”

“Oh. some dude of a fellow about twenty-five, who has not enough masculinity about him to raise a whisker. He’s about as smooth a guy in manner and speech and face as you ever ran across. Why he looks like a fashion plate—not a 118

salesman, rough and ready for any emergency.’’

“But see here Bill, you are not down on him because he wears good clothes, a clean collar, polished shoes, and shaves every morning, are you? You must have something more than that against him to talk the way you do.”

“Oh, no, I suppose not, but I tell you, Mr. Herman Peters, I never had time for any flummy diddles,” he growled.

“But you will have now,” answered Herman, and his reply was full of meaning, even to the dejected Bill.

"Explain yourself, sir,” retorted the other with some heat.

“Well! I will. I was told by a man in the service of your firm that you were getting a big salary—$2,800 a year—and were a good salesman. but you have been warned several times to spruce-up—that you were not representing a rag establishment, or a hair growing tonic, and yet you haveigone on persistently and indifferently. My informant said that warnings seemed to have no effect, and now you find yourself out in the cold.”

“W ell, so long as a man feels comfortable it doesn’t matter much how he looks, does it?” and Bill finding no confirmation in the eyes of the man next to him pulled more vigorously than ever at his. strong smelling pipe, and shot an inquisitive glance at me.

“I don’t agree with you sir,” I replied, “stranger though you are to me, and I don’t want you to interpret my remarks as in any way personal. I have always found that prosperity begets prosperity, that if you look as if you are run down at the heel, people are naturally inclined to think so. A man is often as he feels. I used to be an advertising solicitor before I got my present job, and my firm sent me over to England one summer to get some business there. T wore a hard felt hat,

a turn down collar, and a comfortable, easy fitting suit of clothes. I was presentable enough, but I found that I could not get in to see many of the big managers, whose ear I wished to reach. On one pretext and another—some of them decidedly flimsy—I was turned down. The situation was distressing, and 1 was chagrined. Then a friend met me one day and told me the reason— that, when I was in another spot, I must do as they did: ‘Don a topper, put on a Prince Albert, patent leather shoes, a pair of suede gloves, and see what a transformation there will be in your reception.’ I did so, and sure enough, thus rigged out, I secured the entree to many private offices, admission to which had previously been denied. Yes, sir! it worked like a charm.”

“That may go all right across the pond,” answered Bill, “but things are different in this democratic country. I never had any time to personally titivate.”

“Well,” remarked Peters, “I take fully three-quarters of an hour every morning to complete my attire.” “You might be calling on customers and corralling several good ordders in the time it takes you to dress,” was all the sympathy he go; from the older drummer.

“Oh, I get up early and follow a routine,” continued Herman, “I polish my shoes, wash, shave, and take a cold plunge. Lost time—not a bit of it. When T sally forth I feel as fresh as a daisy.”

“Sure,” said I, chiming in, “it is as natural now for me to shave every day as it is to wash, button my collar, or adjust my necktie. Many men think that scraping the fuzz off their faces is an accursed nuisance. They are inclined to let it go rather than attend to it. They have no regularity about anything. I used to look upon the procedure in very much the same way.”

“What caused you to change your

mind?” pursued Bill, who was evincing more interest in the conversation.

“Well ! it was this way: I am now fifty-four years old, and have been thirty on the road. I used to visit barber shops whenever I got a few minutes, and the barbers wheedled me into the belief that 1 could not shave myself, although I often thought I would like to do so. They told me my beard was awfully wiry and tough, and my skin too soft, and lender. One day—it was dreadfully hot — when evening came, I was pretty well fagged out. I sat down no do a little thinking, and while ruminating over the past I formed a definite resolve.

“Well, to go on with my yarn, I found that averaging the time taken at twenty-five minutes a day for three hundred days in a year, and extending over a period of thirty years, that I had just spent 3,750 hours in tonsorial parlors. Reckoning the ordinary working day at

eight hours, I was appalled to learn that I had passed 470 days, or a year and a half of my life in a barber shop, not to mention the cost. I thought what an awful waste of time, what a sacrilege of opportunity! Then I bought a good safety razor, found that I could clean my face in seven minutes, and it was done for the day. I had not to be the servant of any man, or await his beck and call. I did not like the thing at first, naturally I had a prejudice against it, but I gritted my teeth and said, ‘if so many others find you a true friend, I am sure that I can.’ The fourth morning I got on to the hang of the thing, and in a week I was an expert at its use, and from that day—three years ago to the present—I have never let a barber do anything for me except to shear my locks, and I have never missed my morning shave. It is just as natural for me to pick up that little, keen-edged, sanitary instrument, as it is for me to put on my shirt—and no more trouble. I never invested five dollars that yielded me so much happiness and satisfactory results.

“And what’s more, if anyone told me that this little device would prove such a friend, I wouldn’t have believed him. I tell you, Bill, I was so interested, that when in Mont-

real, my attention was attracted to the Gillette factory. There and then I determined to visit it. The visit certainly explained the perfection of my little safety. The material used and the workmanship was a revelation to me. Every part used was a proven necessity, and so finished as to insure a perfect razor.

“The Gillette people make some pretty strong statements in their advertising, but I can tell you I do not believe any of them are exaggerated, either about their razor or their factory.”

“What make did you say it was?” interrogated Bill, who had become immensely interested in my personal narrative.

“It was a Gillette. Why do you ask?” I ventured.

“I say, boys,” he exclaimed as the trainman shouted Woodstock, “I have to leave you here. I am about to turn over a new leaf.”

“I’m going up town to get one of those articles you just told me about, and also a new job.”

When I met him two weeks later, I scarcely recognized my former casual smoking car acquaintance. He was radiantly happy. “Say,” he shouted across the street, “I got both those things. I’m a new man now.” 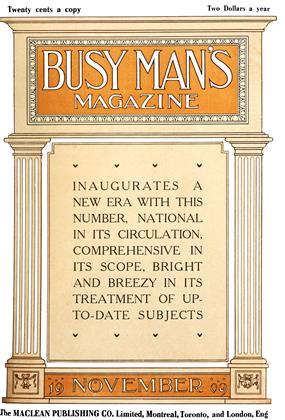