Christmas Aboard an Ocean Liner CAPTAIN A. H. VIPOND December 1 1909

TWO or three years ago I remember a couple of tiny girls coming to me whilst I was on the bridge of one of the Allan steamers to ask if it were true that we had on board Father Christmas as a passenger. Had you been in my place I think you would have answered as I did. I told them that not only w'as Father Christmas on board, but that he was going to make a present to all the little boys and girls when they were sound asleep in their cabins. How delighted those youngsters were! Yet they had their misgivings, for they could not understand how Father Christmas could find his way into a cabin where there was no chimney.

As a matter of fact, it is quite true that at sea, as on land, wherever there are a few English people, the old, old festival of Christmas tide is kept up. It has grown to be quite a part of us, and comes, therefore, as I may put it, in the natural order of things.

Curiously enough, throughout my life on the sea, I have never known a Christmas Day marred by really bad weather. As a rule, the elements have somehow seemed to come into harmony with the peaceful associations of the day. Heavy falls of snow I have known, of course, and on these occasions, when the water has been fairly calm, the comparative silence of the ocean was

very vividly borne in upon us. There was no sound to be heard save the swish of the waves and the whirl of our propellers. Although the bridge of a liner is not the most attractive place in a blinding snowstorm, I have often thought that I know no prettier spectacle than a great steamer outlined in the virgin white of the feathery flakes.

I am often asked at this time of the year whether it is true that people send Christmas cards to one another on board ship. It will no doubt interest many of my readers to hear that the practice is very general on the big Atlantic liners. If the passengers before embarking have not provided themselves with a few cards (and generally they do forget to do so) they can rely on purchasing some from the ship’s barber, or other official, who usually lays in a good variety, knowing that he will readily dispose of them. He often has, also, a little stock of fancy goods suitable for presentation purposes. These, too, are quickly bought up by the passengers, who are glad of the opportunity to secure some little nick-nack to offer a friend as a Christmas gift or souvenir of the voyage.

Though there is an official “post office” on the ship, with a collection immediately prior to sailing and one on arrival at port, it will be obvious to my readers that passengers do not drop their cards into the letterbox if the ship is in mid-Atlantic, to be delivered to those on board next day. Letters, etc., put into the box are treated just as if they were in the ordinary pillar-box on land, and they are not taken out until the proper collecting time. No; if you have a few Christmas cards to be delivered to your fellow travelers in another part of the ship, the man who acts as the postman is your steward. On Christmas Eve the various stewards receive a -large number of letters, cards, packets, etc., for delivery early

on Christmas Day, and these are either placed before the recipients on the breakfast table, or taken to the proper cabins with a cup of tea or coffee as soon as the occupants are stirring.

The happiness and delight derived by young and old alike from these little gifts is simply unbounded. Breakfast on board is served, of course, in the handsome diningsaloon, and the litter of envelopes, paper and string on the carpet afterwards occupies the attention sometimes of half-a-dozen stewards 1o clear it away! 'The captain on the^e occasions is seldom forgotten, and though he misses the good wishes for a Merry Christmas and a Happy New Year from the dear ones at home, he receives innumerable expressions of goodwill from his passengers.

Besides the customary Christmas cards, we nowadays are able to send and receive greetings to and from passing ships and the mainland by means of wireless telegraphy. This has grown into a popular custom, and a Christmas Day at sea never passes without an interchange of messages and good wishes from friends at home and the passengers on steamers crossing the ocean. A message addressed to the passengers as a bodv is posted on the notice boards, where every one may read it, and needless .to say it enhances the prevailing feelings of good-fellowship.

Divine service is as much an institution at sea as on land, especially on Christmas Day. It is attended by all classes of passengers, and it nearly always happens that there is a clergyman on board to officiate. He conducts the service just as though he were in his own church at home, except for a few minor differences in routine. Hymns for this season of the year are selected and are sung with great heartiness, while on steamers such as the Virginian,

which has a concert party formed of stewards, carols are sung by what I may truthfully term the choir. It may cause a smile when I say that we always make a collection on these occasions, but the proceeds do not go towards the “Building Fund” or the “Mother’s Meeting Social Fund." or the “New Organ Fund,” or for the “Sunday-School Scholars’ Next Tea Party"—they all go to that splendid institution, the Seaman’s ( Orphanage. 1 need scarcely add that the service includes a sermon on the Christmas festival and all that it means.

Towards evening a most appetising odor may be detected in the neighborhood of the dining saloons. It heralds the approach of Christmas dinner—such a dinner as is unrivalled even in the finest London and Continental hotels. Its preparation was in progress weeks before the ship sailed, for all the edibles had first to be decided on, then ordered, and finally examined by the master steward and victualling superintendent, whose office is an important one on shore.

ou may be certain that he provides a few dozen turkeys and geese, together with hundreds of rounds of beef, a plentiful supply of whatever game is in season, plum puddings, fruits, as well as the ingredients for all descriptions of innumerable dainty dishes. When you are at the table and read the menu before you, you cannot but wonder whence came

all the tempting things the chef has provided.

Though I have been at sea many years, I am even now sometimes amazed at the extraordinary appliances which are used by the cooks. One of the chief of these worth mentioning is, perhaps, the refrigerating apparatus, in which are stocked all the goods liable to perish unless kept in the ice chamber.

The good old-fashioned Christmas fare remains as popular as ever at sea, and is immensely enjoyed. Toasting each other’s health follows among the passengers, and the function winds up with snap-dragon and other games, and the pulling of Christmas crackers, which afford endless enjoyment.

Meanwhile, the purser, stewards and other officers have*arranged a sacred concert for the evening, and it is really surprising how successful these gatherings prove to be. When we happen to have a professional singer on board, he or she most willingly voluntèers to assist the amateurs, who put forth every effort to bring the Christmas festival to a successful end.

Before concluding I should add that next day—Boxing Day—a round of entertainments is provided, the programme generally including a fancy dress ball and amateur theatricals.

Life on board an ocean liner at Christmas time is, after all, not without its pleasures. 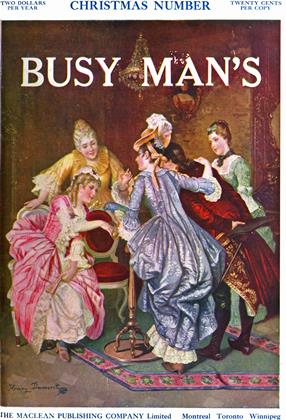