I FIRST came into close contact with The Outlook when Governor of New York, ten years ago, and I speedily grew to have a peculiar feeling of respect and regard for Dr. Abbott and his associates. We did not always agree, and as our convictions were strong our disagreements were sometimes positive; but experience taught me that, in the first place, Dr. Abbott and his associates always conscientiously strove to be fair, and that, in the second place, they not only desired to tell the truth, but made a serious endeavor to find out the facts. I found, moreover that they combined to a peculiar degree a number of qualities, each of them good, but rarely found in combination.

’This is ex-President Roosevelt's first contribution, as associate editor, to the Outlook. Its complete title is “Why I Relieve in the Kind of American Journalism for Which the Outlook Stands.”

During the last few years it has become lamentably evident that certain daily newspapers, certain periodicals, are owned or controlled by men of vast wealth who have gained their wealth in evil fashion, who desire to stifle or twist the honest expression of public opinion, and who find an instrument fit for their purpose in the guided and purchased mendacity of those who edit and write for such papers and periodicals. This style of sordid evil does not even constitute a temptation to The Outlook; no influence of any kind could make the men who control The Outlook so much as consider the question of abandonment of duty; and tlmy hold as their first duty inflexible adherence to the elementary virtues of entire truth, entire courage, entire honesty.

Moreover, they are as far. removed as the poles from the apostles of that hideous yellow journalism which defies the cidt of the mendacious, the sensational, and the insane, and which, throughout its wide but vapid field, does as much to vulgarize and degrade the popular taste, to weaken the popular character, and to dull the edge of the popular conscience, as any influence under which the country can suffer. These men sneer at the very idea of paying heed t-o the dictates of a sound morality; as one of their number has cynically put it, they are concerned merely with selling the public whatever the public will buy—a theory of conduct which would justify the existence of every keeper of an opium den, of every foul creature who ministers to the vices of mankind. Here, again, it is perhaps not especially to the ci edit of Dr. Abbott and his associates that they have avoided this pit; fortunately, they are so constituted that it is a simple impossibility for them to fall into it.

But they do deserve very great credit for avoiding another type of temptation which has much fascination for men of cultivation and of refined taste, and which is quite as fatal to their usefulness as indulgence in yellow journalism. A newspaper or periodical which avoids vulgar sensationalism, which takes and cultivates an interest in serious matters, and things literary, artistic, and scientific—which, in short, appeals to people of taste, intelligence, and cultivation—may nevertheless do them grave harm, and be within its own rather narrow limits an element of serious mischief ; for it may habitually and consistently practice a malign and slanderous untruthfulness which, though more refined than, is at least as immoral as, the screaming sensationalism of any representative of the journalism which it afifects to despise. A cultivated man of good intelligence who has acquired the knack of saying bitter things, but who lacks the robustness which will enable him to feel at ease among strong men of action, is apt, if his nature has in it anything of meanness or untruthfulness, to strive for a reputation in what is to him the easiest way. He can find no work which is easier —and less worth doing—than to sit in cloistered aloofness from the men who wage the real and important struggles of life and to endeavor, by an unceasing output of slander in regard to them, to bolster up his own uneasy desire to be considered superior to them. Now a paper edited by men of this stamp does

not have much popular influence, and therefore is less detrimental to the people at large than yellow journalism ; but it may, to the extent of its power, exert a very real influence for evil, by the way in which it teaches young men of good education, whose talents should be at their country’s service, that decent and upright public men are as properly subpects of foul attack as the most debased corruptionist ; that eciency and wickedness are interchangeable, and that the correct attiude to adopt, in facing the giant problems of our great and troubled time, is one of sneering and supercilious untruthfulness.

Dr. Abbot and his associates have avoided this pitfall also. With them cultivation and good taste have not implied weakness. Demand for righteousness in others has not led to abandonment of truth on their own part.

The Outlook has stood for righteousness, but it has never been been self-righteous. It stands for the things of the spirit, and yet it remembers the needs of the body. It serves lofty ideals, it believes in a lofty idealism. But it knows that common sense is essential above all other qualities to the idealist; for an idealist without common sense, without the capacity to work in hard, practical fashion for actual results, is merely a boat that is all sails, and with neither ballast nor rudder. The Outlook’s belief in gentleness and tenderness, in the spirit of brotherly love, never blinds it to the necessity of cultivating those hardy, rugged, and vigorous qualities for the want of which in the individual, as in the Nation, no gentleness, no cultivation, and, above all, no gift of money-making and no self-indulgence in the soft ease of living, can in an> way atone.

The Outlook has show i a fine scorn of untruth in every form, of unfairness and injustice to any man or any cause. It is not given to humanity never to err; but The Outlook makes a resolute effort to find out what the facts actually are before passing judgment. With it earnestness and strength of conviction go hand in hand with a sincere desire to see and to state the other man’s point of view. It believes that things in this world can be made better, but it does not endorse quixotic movements which would merely leave things worse. It champions the rights of the many. It desires in every way to represent, to guide aright, and to uphold the interests of those whom Abraham Lincoln called the plain people. It feels a peculiar desire to do all that can be done for the poor and the oppressed, and to help upward those struggling to better themselves. But it has no sympathy with moral weakness or sentimentality. All that it can do it does and will do for the cause of labor; but it will in no shape or way condone violence or disorder. It stands for the rights of property, and therefore against the abuses of property. It believes in a wise individualism, and in encouragement of individual initiative; and

I am glad to be associated with Dr. Abbott and the group of men and women he has gathered around him, because they practice what they preach ; and because they preach the things that are most necessary to the salvation of this people. It is their earnest belief that every man must earn enough to support himself and those dependent upon him ; but that when once this has been accomplished, money immediately becomes secondary to many other things. In this matter The Outlook puts its principles into practice. It strives in proper ways to make money. If it did not make money it could not be run at all. But making money is not the prime reason for its existence. The first question asked when any matter of policy arises, so far as The Outlook is concerned, is whether or not a given course is right, and should be followed because it is in the real and lasting interest of the Nation. 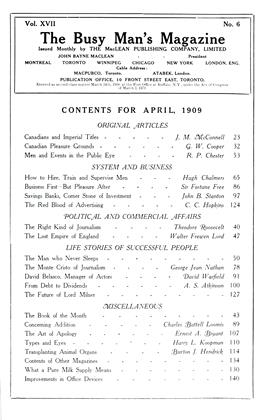