Why Americans Fail in England LORD NORTHCLIFFE May 1 1909

YOU ask me why a number of American advertisers who have been successful in their own country have not met with a corresponding degree of good fortune in England.

I would point out that, as a matter of fact, there are a number of American businesses that are extremely prosperous. A business once established in England may be considered more permanent than anywhere else; that, we think, is a settled fact. The English are less changeable than any other people ; but, on the other hand, they are not so easily captured.

Many of your business people who wish to establish themselves in England do not sufficiently survey the field, and, as a rule, do not send their best men.

People have come to me with letters of introduction, who have been sent over to open business in England, though they have never been out of the United States before, and have no idea of English customs, spelling or business habits. I have known them to come to London to introduce goods which are already over-produced in England. I have seen them send over tons of printed matter that, from lack of knowledge, was absolutely worthless, or less than worthless.

England. No one could understand what they were after. A “shoe” with us means a low shoe; with you it means, I believe, what we call a boot. This is only one of many mistakes that I have seen made.

It is absolutely essential before entering the English market to have preliminary investigations made by one who understands British demands and British ways. The nature of the competition that will have to be faced should also be carefully ascertained.

A common complaint made by the visiting American is that the heads of our business concerns are inaccessible. They are not inaccessible when the time comes for the discussion of business, but they very wisely avoid unnecessary business interviews, a principle that I notice is being followed in the United States much more than when I first made its acquaintance, fifteen years ago.

Our interviews are much shorter. The Englishman is said to be blunt and brusque. He does not mean to be, but while he is at business he gets through as much as he possibly can. English business letters are much shorter than yours; you do not think yourselves courteously used if a business reply seems brief.

I do not think you can expect an American with less than a year’s knowledge of England to make a very accurate survey of the field.

In regard to advertising, the situations are quite dissimilar; with you it is the evening papers that have great circulation ; with us the morning journals, save in one or two parts of the North of England, where, as with you, the evening journal looks as though it may predominate. We have not your array of monthly magazines. We have practically no mail order journals, but we have hundreds of weekly newspapers and periodicals, each in their way valuable to the advertisers.

An American friend came to me eight years ago with regard to the introduction of his business into England, and asked my advice in handling a domestic commodity and necessity. It had been his intention to put the matter in charge of a gentleman in London who handled a considerable number of other specialties. I said to him: You would not dream of handing your Chicago business over to a middle man, and here you propose to do so with ? population of 40,000,000 people. He thought it over, and, after adjusting his afifairs, came to England himself, made a general survey of the country, and then selected one of the smaller towns for his experiment. I gather that he has made a large fortune, for he is now coming to England to embark on another venture, which I have no doubt will be as successful as his first.

Every country has its prejudices, its natural likes and dislikes, for many of which it is difficult to ascribe any reason. Many American 34

articles have failed in England for need of a little adjustment. In such small matters as the wearing of boots, for example. You wear light boots and in wet and cold weather put on “rubbers,” or, as we say, “goloshes.” Rubbers with us are regarded as something for old maids and curates; when they are mentioned it is a signal for laughter. You will remember that the Curate in the “Private Secretary” carried round with him a pair of goloshes and a bottle of milk. I do not see why the habit of wearing rubbers should not be made general in England, where we have more damp days than you, and are just as fond of catching cold.

It is useless, however, to try to force some things on people. The Pullman car, for instance, was a hopeless failure in England. I cannot tell you why, but the people did not like them. There are only one or two now running. But a modification of the Pullman car would, in my judgment, have been very successful.

Some years ago a man came to me with a letter of introduction, asking for advice as to whether he should open some “shoe-shining saloons.” He had been through London once on his way to Paris, and had noticed that there were no “shoe parlors,” as he called them. Here was a city, he said, with a population taken on a Chicago or Philadelphia basis of ten or twelve millions, where there must be a magnificent opportunity for such an enterprise. I pointed out to him that in England that kind of thing was done at home, and that if a person should appear on the streets with unbrushed boots, he would be regarded as far from respectable. However, my advice was disregarded. I understand that the shoe saloon was opened, and the proprietor gathered in about twenty customers a week. 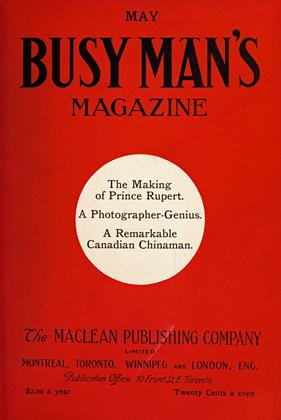