THE rapid growth of our larger Canadian cities is bringing nearer and nearer the day, when conditions of life in them will approximate more closely to prevailing conditions in the larger centres of population in the United States. Already there is an increasing number of people in Toronto, Montreal, St. John, Halifax, etc., who forsake the city during the months of summer and take up their residence in cooler and more pleasant quarters in the neighboring country, journeying in and out of the city each morning and night by train, trolley or steamer. But the day is fast approaching when these people will not be content to sojourn in the country only during the summer, they will soon make their homes there permanently. And then we will have conditions identical with those in New York, Boston, Philadelphia and Chicago.

Even to-day, if a census were taken of the workers in our cities, who nightly journey outside the city limits, the number would be found to be astonishingly large. With improved means of transportation, the army of Canadian commuters would undoubtedly reach imposing proportions.

In the light of these facts it is interesting to learn something about the manner in which the suburbanites in American cities are looked after by the transportation companies.

If it should occur to any one to doubt the reality of the tremendous movement away from the cities which has developed during the last few years, let him consider the fact that a million or more people stream into the ten largest cities of the country every morning, only to stream out again when the day’s

business has been finished. This is purely suburban traffic. These people come for the most part from within an hour’s ride of the city’s business centre. They go to make up that grand army of commuters, which has come to be a remarkable feature of American life.

They come and go by train and by trolley. Every railroad which enters the larger cities makes special provision for this suburban traffic. Six o’clock in the morning is none too early for the arrival of the advance-guard—artisans and laborers for the most part. For an hour or more the stations are filled with them as the trains roll in in quick succession. Then gradually the aspect of the crowd changes. Shop girls, milliners, sales ladies, cashiers and book-keepers come hurrying along the platforms, many of them carrying lunch boxes artfully designed to represent hand cameras or shopping bags.

After eight o’clock the flood of incoming humanity swells rapidly. Well-groomed men of middle age and sober countenance swing themselves from the car steps and hurry toward the entrances, many of them crushing newspapers in their hands or crowding them into their pockets. Nine o’clock sees a marked diminution in the number of incoming commuters, but by that time the throng includes a great many prosperous professional and business men, not a few of the former being easily identified by green bags bulging with books and papers, which they grasp tightly as they swing along with the throng rushing toward the open door. By ten o’clock most of the bankers and other late arrivals have left their trains, and the tense activity of a business day has seized upon the city.

In the middle of the afternoon there comes a reversal of the conditions which prevailed in the morning. By three o’clock some of the bankers and men of affairs turn their faces countryward. This is

true especially during the spring and summer seasons, when the golf links and the country clubs make their strongest appeals.

It is interesting to consider the extent to which the various cities are depopulated each week-day night. Some years ago figures were compiled to show the amount of daily suburban traffic on the railroads to and from the largest cities of the country. As might be expected, New York leads with its 100,000 people who enter and leave its portals each working day, on one of the many railroad lines which have terminals at the metropolis. Just how many people go back and forth by trolley can only be estimated, but the army of such suburbanites must be enormous. The number of commuters is not to be gauged by the size of the city, however, for Boston, although much smaller than Philadelphia and Chicago, yet has a larger influx of suburbanites each day by several thousands. Indeed, Boston, with its 80,000 commuters, is not far behind New York itself.

Each week-day the trains bring 60,000 people into Chicago and take them away again at night, while the commuting population of Philadelphia is figured at 36,000. Before the earthquake, San Francisco had more commuters than Philadelphia, the number being given as 38,700.

The range of travel for commuters lies mostly within a radius of twenty-five miles; the average distance traveled is about seven miles.

Naturally, most of the railroads entering large cities devote no little attention to the matter of suburban traffic. Some of them have experimented with specially designed cars which may be filled and emptied quickly. One railroad entering Chicago, for instance, has several trains consisting of cars the entire framework of which is constructed of steel. These cars# have seats for one hundred passengers, arranged in sections transversely of the car, with

two aisles, one on each side, at the

ends of the seats, and extending the entire length of the car, connecting at the vestibule with end doors. Opening directly from the aisles are twenty-four sliding side doors, twelve on each side. These doors are placed equal distances apart throughout the length of the car, a door being opposite each section of eight seats. This arrangement of aisles and seats gives great facility to the movements of passengers when entering and leaving the cars.

Of course, cars of this sort require that the station platform be upon the same level as the floor of the car. The doors slide within the walls, which are hollow, and are controlled by mechanism, which is operated either by compressed air or by hand. They are exclusively in the control of the guard, who rides within the cars, and upon the arrival of the train at the station releases the mechanism, so that the doors may be opened separately by the passengers either from within or outside of the cars.

When the passengers have left the car and those who take the train have entered, the guard puts into operation a mechanism which automatically closes and locks the doors of each car simultaneously. When all of the doors of the train have been closed and locked, an electric signal is given to the engineman, who then releases the train. This method of operation is so rapid that one hundred passengers have been discharged from a car at the terminal station in four seconds, and the ordinary stops at intermedeiate stations, where many passengers enter and leave the train, are made in from six to eight seconds.

The system of automatic electric signals connecting all of the side doors with the locomotive admits of long trains being handled with the same facility and despatch as shorter trains, and greatly increases the operating efficiency of the train service.

A few railroads operate what are

known as club cars, to which the public is not admitted. As a rule, these cars have luxurious appointments and are in charge of an attendant. They are rented bv a club made up of commuters, for a season or a year, at a special rate, and are assigned to run upon such trains as may be desired. As they have accommodations for but a limited number of passengers, it is possible to so design the intercior arrangement that they shall be particularly convenient and comfortable. The seats in such cars are reserved, the right to their use being purchased by the season or the year by members of the club, who frequently pay a premium for the choicest seats. The amount raised from the sale of the seats is used by the club to pay the rental of the car.

Some of the railroads are experimenting with a gasolene car which may come into common use for suburban service. It is commonly called “the projectile car’’ because of the cartridgelike appearance which it presents. Its peculiar construction allow of high speed, while it is easily handled.

Most of the railroads are obliged to enter into keen competition with parallel trolley lines for their suburban traffic, the result being exceedingly low rates of fare. Many of them have special arrangements whereby a commuter may secure a material reduction from the roundtrip rates by buving monthly tickets. Various plans have been devised by the different railroads by means of which it is possible to travel back and forth between the city and suburban towns at a very small cost, provided that a specified number of journeys are made within certain limits of time. These rates differ greatly, however, on the various railroads. On some roads special rates are made for round-trip tickets from suburban towns.

What has been said, up to this point, has had special reference to

the railroads. As a matter of fact, the trolley companies have been perhaps the most powerful factor in developing suburban communities, the railroads having recognied this development and having taken advantage of it rather than having been active in encouraging it. The trolley lines have bound the outlying towns to the cities bv bands of steel, and have introduced facilities of travel back and forth not dreamed of a few years ago. The electric road has reached out in every direction, and it is now possible to ride for long distances without change of cars in attractively appointed, thoroughly heated, well-lighted and comfortable cars.

When this condition first began to obtain, it was feared by the merchants doing business in the smaller towns that the coming of the trolleys would injure their trade by

making it too easy for their customers to reach the larger shopping centres. For this reason many trolley lines have been bitterly opposed for years. As a matter of fact, time has shown that there has been little ground for these apprehensions, for the business of the country merchant has been improved, rather than the contrary, while the customer has benefited by a larger stock, greater variety and more modern methods, and so, altogether, is well pleased.

For the sake of the race, country life is greatly to be desired and any steps that may be taken to induce city people to get out into the open are commendable. The tendency of population has been cityward for many years now. Is it not about time that a movement was set on foot to revert to the country, the natural home of man? 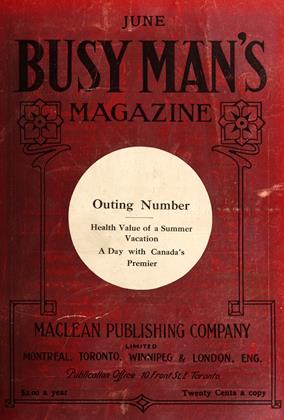