MAINLY ABOUT OURSELVES THE EDITOR August 1 1909

Taking as its text the questionable statement made by a speaker at the American Library Association that the majority of magazine readers only look at the pictures and perhaps glance at an article or two to see what the illustrations are about, a Canadian newspaper preaches a sermon on the uselessness of magazine advertising and the superiority of newspaper advertising.

It is evident that this newspaper has observed the marked increase in magazine advertising in Canada and, instead of welcoming this phase of publicity, views it with jealousy. Any chance argument that occurs to it to attack and injure magazine advertising, is made use of.

If we wanted to be nasty and adopt similar tactics, we might point out that the majority of the readers of the newspaper referred to, have not a sufficient individual buying power, to make it worth while for ninety per cent, of the advertisers in this magazine to use its (the newspaper's) advertising columns.

What is a magazine, anyway ? Is in not in reality a specialized monthly newspaper with a national circulation ? Greater care is paid to its compilation, larger sums are expended for its illustrations and its contents are treated in a more pleasing and artistic manner than the daily newspaper. It appeals usually to the aesthetic in man and its influence on cultured people is greater. It is the favorite companion of the leisure hour and is read with more deliberation. On account of its fine press-work and its fine paper, allowing the use of half-toneillustrations, the advertising writer has a better opportunity to present his arguments in attractive form.

Without any desire to belittle the daily newspaper, which has its thousands of readers, it must be apparent that a large proportion of newspaper readers are not moneyed people,, whereas almost the entire list of readers of such a magazine as the Busy Man's are essentially people of means, capable of buying nearly everything that can be advertised in its advertising sections.

However much we may personally deprecate the increasing amount of fiction in our table of contents, still it is a departure in our policy which seems to have pleased the majority of our readers. The people of to-day are omnivorous readers of short stories and novelettes, as witness the fact that some of the most prosperous magazines of the day, are composed entirely of fiction. Many a magazine is subscribed to for its stories alone. In fact, to gain a circulation of extraordinary size, a magazine must provide popular fiction. One or two of our readers have written in, lamenting about the increase in the amount of our fiction but the majority of our correspondents express their approval not only of the general principle of the thing but of the special selections we have made.

For our September number, the leading article will be “How the Governor-General Earns his Salary,” a most instructive and entertaining article on a little-known subject. The GovernorGeneral is of course a familiar figure to every Canadian from coast to coast but few people are aware of his functions. The prime minister's duties are much better known than those of the King's deputy. The article will be admirably illustrated with pictures, specially photographed for The Busy Man's Magazine.

Space in the September number will be devoted to office appliances and we will have one or two articles of special interest to office managers. This will be in accordance with our policy of keeping in close touch with the business men of the country. 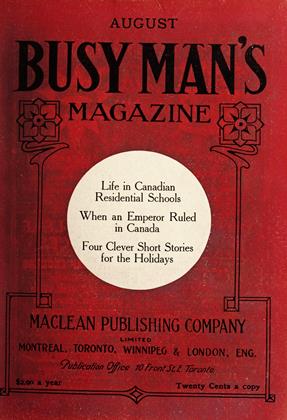