TRAVELING in the most superb train of private cars ever assembled on a Canadian railroad and accompanied by a staff of officials, whose ability would be the envy of many a crowned head, the president of the Grand Trunk Railway System, Sir Chas.

C.M.G., has been making his first official visit to the campany’s lines in western Canada.

Sir Charles is now quite an elderly man, being seventy-eight years of age. X evertheless, he is active, both ]) h y s i c a 1 1 y and m entail y, and makes his annual visit to America with a considerable degree of pleasure.

1 le lias had a long experience in public life, and has taken an interest in several projects of world-wide importance. Entering the Treasury Department in 1856, he was appointed ComptrollerGeneral of the National Debt Office in 1874, holding this post until 1894. ■is

In the following year he accepted the presidency of the Grand Trunk. For a number of years he was actively interested in Egyptian affairs, serving as Finance Minister during the P>ritish occupation from 1877-79. He also served on the Council of the Suez Canal Co. from 1876-1895. It will thus be seen that Sir Charles possesses a m p1 e qualifications for his present position and the gradual strengthening of the Gr a n d Trunk’s position financially is in no small degree attributable to bis ability and management.

A pathetic little picture is presented by the new and diminutive S h a h of Persia, Ahmed Mirza, who succeeded his father ou the Peacock Throne on July 17. The former Shah was virtually deposed after ruling for a year and a half. The new ruler, who is only eleven years of age. is not the eldest son of the deposed monarc'1, but he succeeds because his mother is a Kajar Princess. He wept bitterly when the moment came for him to leave his predecessor on the throne and his mother and, said The Times, “it required a stern message to the effect that crying was not allowed in the Russian Legation before he dried his eyes. Then the little man came out bravely, entered a large carriage, and drove off alone. . . . At Sul-

tanatabad he was met by the Regent and the deputation, and ceremoniously notified of his high position and of the hope entertained by the nation that he would prove to be a good ruler. Tnshallah, I will,' replied the lad.”

M. Briand, the new French Premier, is one of the most able of the present generation of French politicians, and is noted for his eloquent oratory. For a Prime Minister he is remarkably young, being but fortyseven years of age. He was Minister of Justice in the Cabinet which has

resigned. In his earlier days he was a red-hot Socialist, but he has since abandoned the Labor Party, as it did not permit him sufficient freedom of action. Pie is somewhat cold and reserved in manner, and is unmarried. In his spare time he is an enthusiastic student of the drama, and never misses a “first night” of any importance.

The defeated Premier of France, M. George Clemenceau, spent several years, when a young man, in America, and married his first wife in New York. He was at the time teaching French in a ladies’ school and fell in love with one of his pupils, marrying her after her course was completed, Strange to say, his early marriage did not eventually prove a happy one and Mme. Clemenceau obtained a divorce. M. Clemenceau has been for forty years in the turmoil of French politics. Throughout the siege of Paris he was mayor of his district and physician chief of the commissariat. Pceoming a member of the Assembly in 1871. he held office ever since. He was called to form a cabinet in 1906.

The man who has built up a successful business is frequently overshadowed and even lost sight of in the growing fame of his product. Pears’ Soap is far better known than Pears himself. The same is true of Sunlight Soap. While the proprietor may have a certain measure of fame in England, it is safe to say that the products of his factories have completely eclipsed the man himself in other parts of the world. The curiousminded may like to have a look at the man, who guides the destinies of this extraordinary firm, with its schemes of profit-sharing and its plans for ameliorating the conditions of its work people. W. 11. Lever is a member of Parliament, elected as a Liberal in the landslide of 190C. lie was born in Poitou in 1851 and at the age of sixteen entered his father’s business there. He moved about for some years from place to place before settling in the neighborhood of Liverpool. and establishing the works at Port Sunlight. I lis name will iloubt-

less go down to fame as one of the pioneers in modern industrial methods, in which may be included the successful utilization of the power of advertising and selling goods.

Another industrial giant, whose product is far better known to Canadians than is the man himself, is the head of the chocolate manufacturing firm of Menier. M. Gaston Menier. who is shown in the illustration in conversation with Emperor William of Germane. aboard his yacht, is an important personage in the business world of Europe, both as a manufacturer and a financier. To Canadians, he possesses an additional interest, in that the Island of Anticosti, in the St. Lawrence, belongs to the Menier family, and has been in their possession since 1895.

Still another honor lias been conferred on Sir Percy Girouard. the Canadian officer, who has been climbing rapidly in the Pritish service of late vears. Sir Percv. it will be remembered, is the son of Mr. Justice Girouard, of the Supreme Court of Canada. He has now been appointed Governor of the East African Protectorate. Prior to this appointment Sir Percy held the post of High Commissioner and Commander-in-Chief of the Protectorate of Northern Nigeria. He first came into prominence in the building of the railway through the Soudan, which made Lord Kitchener's success there possible. He was also conspicuous in the Boer war, being Director of Railways during the campaign. He was created a K.C.M.G. in 1900.

stand up before a firing party, and preferred to retire hurriedly rather

than face such a risk. Herr Schaumann has considerably more confidence in his invention, as may be seen from these photographs, which show his stopping with his ‘‘chest-protector" heavy bullets fired from a rille.

That aviation will presently become just as much a fad among the wealthv seekers titter pleasure, as motoring is

to-day, is a foregone conclusion. A foretaste of some of the sport in store for the future amateur aviator is given by the spectacle of the hare and hounds balloon race at Hurlingham. England, when a number of noted society leaders participated in an exciting flight in a half-dozen or so balloons. 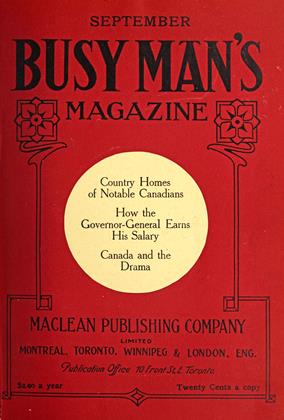