A Bogus Peer and His Distinguished Dupes February 1 1910

W. A. Croffut has resurrected in Putnam’s Magazine the story of “Lord Gordon-Gordon,” the bogus peer, who duped several of America's most famous business men early in the seventies. The story is a new one to the greater part of the present generation, and, as it was enacted partially in Canada, it is not out of place to outline it here.

Lord Gordon-Gordon first set up his pretensions to nobility and wealth in the City of Minneapolis in 1871. In two days, his suavity of manner had won the entire confidence of Colonel John S. Loomis, Lord Commissioner of the Northern Pacific Railroad. He represented himself to be possessed of an income of a million dollars a year and his visit to the west was for the purpose of securing areas of land on which to colonize his overcrowded Scotch tenantry. For three months, the audacious charlatan Raveled around the state, inspected townsites and taking part in buffalo hunts, at the expense of the Northern Pacific. Colonel Loomis spent $45,000 on him that summer and beamingly said to the directors : “He is the

richest landlord in Europe. He will invest S5.000.000 with us.” His Lordship selected sites for his colony and

then announced that he would go to New York to secure the money to pay for his purchases. When he left, he bore with him a letter of warm introduction from Colonel Loomis to Horace Greeley.

It was early in the year 1872—the psychological moment to visit New York. The Erie war was raging and a battle of magnificent proportions was on. The Erie road was the centre of the conflict. Jay Gould had just fallen outside the breastworks, to his great astonishment and the bewilderment of his friends, and Generals Dix and Sickles were securely intrenched within ; while Daniel Drew and Col. Thomas A. Scott were gently bandaging their wounds. The sum at stake was more than $30,000,000.

Greeley was at once taken in and was soon on most intimate terms with Gordon-Gordon. The latter intimated that he held 60,000 shares of Erie and with this and the holdings of his English friends, he intended to control the next election for directors. The news spread among the financial magnates of the day. To Thomas A. Scott, vice-president of the Pennsylvania Railroad System, and to Col. A. K. McClure, editor of the Philadelphia Times, Gordon-Gordon outlined his plans for the re-organization of the road. Then Jay Gould came into the comedy. After a preliminary conference with the bogus peer,

an agreement was consummated. Gordon represented to Gould that in making his investigations, getting bills passed and bringing litigations to an end, he had been at very large expense ; that his bills had been paid by him personally and that he considered these expenses a legitimate charge against the new organization. Gordon claimed that his expenses had been over a million dollars.

"In view of the fact,” explained Mr. Gould later, "that he had made these advances personally, and that the success of the new plan would depend very much on my good faith and his co-operation, I agreed to deposit with him securities and money to the extent of about onehalf of his expenses, or about $500,000. This pledge was not to be used by him, but was to be returned to me on my carrying out my part of the agreement. In accordance therewith I deposited with Gordon money and securities as follows :

"500 shares of the Erie and Atlantic Sleeping Coach Company.

"200 shares of the Elmira Rolling Mill.

"200 shares of the Brooks Bocomotive Works.

"500 shares of the Jefferson Car Company.

"When I gave him these securities I put a memorandum against each of them of their value. Gordon afterwards wrote me that there was an error in the footing, he thought ; and though there was no error, yet, not wishing to raise any question, and supposing that the money was safe in his hands, I took $40,000 more and deposited with him, making, in all, the securities mentioned and $200,000 cash.”

Marvelous as it may appear, it is absolutely true that at this date this consummate knave was not only possessed of the entire confidence of Jay Gould, the admiration and respect of Thomas A. Scott and Alexander McClure and the trust and affection of Horace Greeley, but he had more than half a million of Gould’s securities and greenbacks in his handbag and Gould’s voluntary resignation as director and president of the Erie Railway Company in his vest pocket ! Gould admitted to his associates that he had given his resignation to Gor-

don simply to induce his co-directors to do the same thing, and in the interest of harmony !

More than this : he had not only

obtained without the pretence of an equivalent this vast sum, but he had exhibited such airs of superiority as to bring the marvelous millionaire to his knees and cause him to assume an apologetic tone and attitude when asked to give some slight guaranty of his honesty and good faith ! This most extraordinary thief had so impressed his new friend with his own fidelity that when he superciliously refused to furnish any voucher for his truthfulness, Gould instantly yielded and handed over half a million dollars on “his lordship’s word of honor” ! And only a week had passed since he first set eyes on his lordship !

But matters were now approaching a crisis. Gordon-Gordon began to sell the stock which he held. Six hundred shares of Erie went without attracting attention, but the sale of 5,000 shares of Oil Creek and Alleghany produced a depression in the market and Gould became suspicious. Greeley was requested to interview him and ask for the return of the securities. All were handed back except 4,722 shares of Oil Creek, the shares of Erie, which had been sold, and a few others. Proceedings were instituted and his lordship was arrested for obtaining money under false pretences. To the astonishment of Jay Gould, two eminent financiers, A. F. Roberts and Horace F. Clark, a son-in-law of Commodore Vanderbilt, went bail for $40,000 for his appearance in court.

The bogus noble put up a great fight when the case came on for trial. He assumed an air of injured innocence and was quite frank in giving the names and addresses of his Scotch relatives. The court favored him. After adjournment Gould cabled to England and secured a repudiation of all Gordon’s claims from the parties whom he had mentioned. Armed with these he attended the hearing on the next day, but in the meantime Lord

Gordon-Gordon had skipped out to Montreal. From there he traveled to Fort Garry.

When the facts became known in Minneapolis, a party was organized to capture the pseudo lord. They went to Fort Garry, caught their man and were on their way home, when a pursuing party overtook them, rescued Lord Gordon-Gordon and took his captors prisoners. Great excitement prevailed and for a time the affair took on an ugly complexion, threatening to "become an “international conflict.” However, wiser counsels won the day, representations were made to the Canadian Government and the kidnappers were released.

The "international conflict” was at an end. but Jay Gould's offer of $25,000 for Lord Gordon-Gordon still held good, and New York City was not without adventurous speculators who were willing to pocket it. It shortly became known that the Hon. Lord Gordon-Gordon. cousin of the Campbells, and descendant of the bold Lochinvar and the Highland kings, had concealed himself in a cottage near Toronto. His pursuers again gave chase, but were fated to obtain meagre satisfaction. Extradition papers were quietly obtained from Washington, two vigorous officials were employed, and the much wanted nobleman was found, not boldly exposed to capture on the front porch, but ignominously asleep in the recesses of his chamber.

“Ah. yes : do you want me ?” he asked, on being touched lightly upon the shoulder. He found that he was at the mercy of two officers stationed on each side of the bed and for a moment he imagined that one of them was Hoy, Brackett’s vigilant chief of police. He playfully requested permission to sleep a little longer as it was not yet noon, but was informed that the

exigency would not permit it. The “gentleman's tiger” who had accompanied his lordship’s splendid retinue over the prairies of Minnesota was not at hand and the sleepy nobleman was compelled to get out of bed without assistance and to complete his toilet by his own unaided exertions. Lord Gordon-Gordon took his arrest with the cool nonchalance which had always been his distinguishing characteristic. He surrendered at discretion. He was permitted to consult a lawyer, and was given five minutes for the conference.

"Tell me,” he said, "if these papers are sufficient to compel me to go with these men and appear in a Toronto court.”

"They are,” answered the lawyer.

"Very well, I will go." and the prisoner smiled a peculiar smile. "Cold, isn't it ? Then I must wrap up.” At this moment his valet returned, not the gorgeous “gentleman's tiger” of the northwestern prairies, but another who, though much humbler, showed himself capable of great astonishment and alarm. He followed his master into the bedroom where they busied themselves with getting the clothing requisite for the journey to Toronto, perhaps New York.

"What have I done that I should be seized like a felon ?" he asked as he vanished into the bedroom.

"Are you ready ?” asked one of the detectives.

“In one moment, policeman,” said the soft, indifferent voice from the inner room. "Here, Grant, help me with these boots.”

There was a long silence. Then came the crash of a revolver in the little apartment and the Right Honorable Lord Gordon-Gordon fell dead across the threshold, carrying all the mysteries of his strange life with him.

Thus ended the career of a man who, while posing as a nobleman on two continents, had successfully imposed on the shrewdest merchants and ablest men of affairs of the day. He proved to be the illegitimate child of a clergyman’s son, and his mother was the parlor-maid in the family. From which of his ancestors he inherited his brilliancy and his vices can only be conjectured. 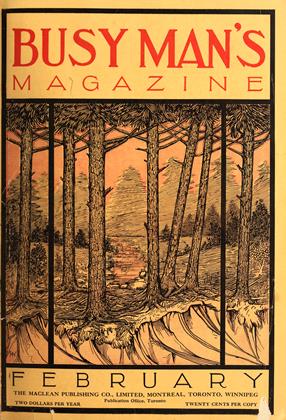