From the Popular Magazine

IT WAS midafternoon when the breakdown came. It resulted in a sudden call and clamor of voices, a signal to the engineer, a slackening down of the soap-polished belt, and a gradual subsidence of the golden pencils of grain straw cascading from the huge wind-stacker’s spout.

"That’s what comes, I s’pose, o’ gearin’ you sloth-lovin’ hoboes too high.” said “Sunset’’ Stevens, blinking through the strong light at the disabled machinery.

“’Ow too 'igh ?’’ protested a sleepyeyed little Englishman in a pair of frayed-out army puttees, that left him as ragged-legged as a Shanghai. He was averse to new ways ; for. years before, at home, he liad threshed grain on a barn Hoor, with flails.

“I mean, son,” languidly answered the lean man with the prairie squint, “that you've got to work willin’ in the West. and work quick, or you ain't workin’ at all.’’

“To ’ell with workin’ quick,” remarked the placid and sleepv-eyed wanderer in the old army puttees.

“That’s what them Brisco boys was always a-preachin,,” murmured Sunset indifferently, staring up into the robin’s-egg dome of the sky.

“Wrhat Brisco boys?” asked the man from the East. And, in the shadow of the huge wind-stacker, Sunset Stevens was prevailed upon to explain how lack and Andy Brisco came into prominence as exponents of the frontier labor problem and its possibilities.

“These two Brisco bov ,” said Sunset. lolling back on his bed of yellow

wheat straw, “were two broken-up sheepmen from down New Mexico way. They’d ambled up across the line, lookin’ for cheap land and a locality where deputy-sheriffs weren’t recognized: They went moseyin’

round till they got hold of three hundred acres o’ sod at Little Dip, right alongside the railway tracks. Still havin’ money to burn, they negotiated a plowin’ and seedin’ gang, and had ’em turn over their whole farm and put her in Number One Manitoba Hard. Thev likewise invested in a full line o’ harvestin’ machinery, and a newfangled portable shack o’ corrugated iron, and a half dozen good teams o’ horses. Then things kind o’ came to a stop. Their energy just kind o’ petered out. They sat around that shack porch smokin’ Mexican cigarettes, and figgerin’ out just how much money they were a-goin’ to make out of that wheat crop.

“ ‘Why, this here Canada wheat farm in’s got sheep herdin’ stung to death !’ says Andy, sittin’ back in a armchair and watchin’ the Western express go down the line.

“ This here Northwest is sure the land for me,’ agreed Tack, putting his feet up, same as Andy.

“ ‘Always cool and nice here,’ says Andy, ‘and something to see now and then along the track, to keep you from gittin’ overlonesome !’

“ ‘And a blamed sight easier than alkali pacin’,’ murmurs Jack, twiddlin’ his thumbs and lookin’ out over that growin’ wheat. ‘All you've got to do is give Mother Nature a tickle under

the ribs, throw in your seed, and tell her to get busy !”

“It didn’t take the Little Dip natives a week of Sundays to get onto the fact that these here Brisco boys were about as all-fired indolent and dog-lazy a team of gringoes as ever migrated northward into the Dominion. They’d turn out about ten or eleven in the mornin', and then ride round horseback, rollin' cigarettes and gloatin’ over that growin’ wheat. By the time she’d begun to head up good and full, they had it all figgered out that she'd sure yield a good forty bushel to the acre. By the time she’d begun to ‘color,’ they had it calculated out that they couldn’t help bein’ at least nine thousand dollars to the good. And finally they wakes up and decides it’s about time to git a couple o’ dozen men into that grain, with self-binders.

“And about that time they saw that they’dbutted up against the darndest snag that had ever impeded their advancin’ ship of progress, so to speak, They kind o’ changed their tune, and started cussin’ the all-fired, good-fornothin’ country. Where were they a-goin’ to git those men? Round harvest time, same then as now, spare hands were about as scarce as hen’s teeth. And there was twelve thousand bushels o’ wheat gittin’ good and ready to shell, and nobody to go agatherin’ in the sheaves, as the old hymn tune has it.

“Now, this here team of New Mexicans I speak of were certainly some indolent. But I ain’t denyin’ they weren’t likewise unduly schemin’ and ingenious. Just what chewin’ and plannin’ and secret powwowin’ they had together, it ain’t for me to say, not bein’ an eye-witness. But at sunup next day Andy, the oldest of the two, strikes out, on a cayuse, thirty-five miles west, for Portage station. Pie takes along with him a carbine and a couple o’ sixes of about ten pounds weight apiece ; and when spoken to at the Dip he allows he’s layin’ off for a couple o’ days o’ pigeon shootin’.

“That is what Andy called it. But

when he gits to Portage he ain’t worry in’ about wood pigeons. He just ambles into that little way station, and apprehends the telegraph operator. He gits the drop on him as lie’s sittin’ there receivin' and sendin’ out wire messages. This happens about four o'clock in the mornin'. And he lays out to his operator that section three of the Alberta Harvesters’ Excursion from the Maritime Provinces would maybe be passin' Little Dip in about forty minutes, and he wants that train held at Little Dip.

“ Til lose my job for this,’ says the operator, blinkin’ at the barrel.

“ ‘Well, I allow that’s some better’ll losin' your head!’

“ ‘But it’s plumb again’ all precedent—holdin’ up a train like that !’ says the operator.

“ ‘Yes, you have,’ says Andy. ‘You can say there’s obstruction ahead— which same might maybe be this gun o’ mine !’ And the operator goes to the key with that gun a-followin’ him, and cuts in and calls Little Dip, and tells him to hold section number three westbound on the sidetrack there, as there’s obstruction ahead. And he decides to tick out a second message something like this : ‘For Heaven’s

sake, send help down here on a hand car. There’s a crazy hobo in here with a gun, holdin’ me up,’ But lie took a second look round at that menacin’ barrel, and didn’t feel like riskin’ it.

“But, when Andy’s backin’ out o' that station house, to slip down the track a few rods and cut the wires before they got busy again, that operator says to him, kind o’ curious : ‘I know you won’t mind my askin’, stranger ; but why in hell’re you boldin’ up that string of eleven coaches o’ down-East farm laborers who would not bring you in thirty dollars to the car?’

“Andy looks at that operator, kind o’ sad and pityin’.

" ‘Why, young man,’ says he, ‘1 ain’t no road agent. I ain’t no holdup man, tryin’ to rake down a trainload o' honest laborers. I’m just a plain, everyday, ordinary, peace-lovin’ farmer from the other side of the line, who’s got a brother down at Little Dip so plump lonesome for company he's gone and killed a steer and teamed. in a couple o’ kegs o’ firewater.

“ ‘But d'you realize that the company’ll hound you off the face o’ the map for a-doin’ a thing like this with one o’ their trains?’ says the agent.

“ ‘Then they’ll have to hound,’ says Andy, takin’ his leave. ‘But 1 ain’t goin’ to set back and see the only brother I got go dippy, just for the sake o’ congenial company!’

“By the time Andy’d shinned up a telegraph pole and cut the wires and then circled off south o’ the track and struck the trail for Little Dip, section three o’ the Alberta Harvesters’ Excursion was hauled up at the sidin’ in front o’ the White Paw ranch. And Jack Brisco was pacin' languid and offhand, up and down inside the wire fence, waitin’.

“D'you ever see one o’ them Mohawk harvester specials held up on the prairie? Ever see ’em stone hand cars and smash eatin'-house windows out o’ pure, all-fired, ingrowin’ energy? Well, them eleven coaches were disgorgin’ hamfisted human bein’s, some prompt, like a split punk log disgorgin’ black ants ! They went swarmin' out over the tracks, and whoopin’ and kickin’ up their legs, and grabbin’ through the fence wires at wheat heads, like Apaches grabbin’ for scalps.

“‘Whoopee!’ yells a Bluenose Comanche, climbin’ a fence post and surveyin’ the farm.

“ ‘Better come round by the trail,’ says Jack, ‘if you all have got to exercise. Or, if vou all are set on wan-

derin’. come up to the shack and lap up a half-barrel o’ moonshine.’

“ ‘There ain't time,’ says the Bluenoses.

“ ‘Oh, yes there is,’ says Jack. 'You’re tied up here for five hours. Bridge at Wilson’s Slough's burnt out.’

“‘Whoopee!’ says that gang o’ liberated and stagnatin’ pilgrims, swarmin’ and kickin’ and jumpin’ over into the White Paw ranch.

“Now, when you git four or five hundred able-bodied farm-hands who have been penned up in a colonist car for five long and slothful days, you’re gittin’ four or five hundred regular dynamos o’ human energy. I don’t see no use enlargin’ on what happened when them cavortin’, gyratin’, tiejumpin’ fork-handlers from down East got up against them three hundred acres o’ open wheat land just achin’ to be reaped

“They swept that wheat farm up as clean as a whistle, put her through a high-bagger, and set fire to the straw stack, free and easy, just to see it burn. And they were still devourin’ barbecued steer when that train crew got orders to go on. And they all shook hands with the Brisco boys, kind o’ regretful, and voted them six hours o’ break in their trip a regular, all-fired hell of a picnic.

“And the darndest, queerest, most puzzlin’ thing about that whole sidetrackin’ business was the fact that there had been an obstruction ahead, right along. The old wooden 'bridge over Wilson’s Slough had burned away and left the rails danglin’ out into empty space. But just whether or not that same bridge fire was an afterthought on the part o’ Andy Brisco, or just whether it was the allround workin’ out o’ Providence, it ain’t for me to say, not bein’ an eyewitness to the same.

“Knowin’ them Brisco boys as I did later on, howsomever, I allow it’s some reasonable to believe Providence ain’t altogether in the incendiary business, just to save the hide of a no-account hold-up man !’’ 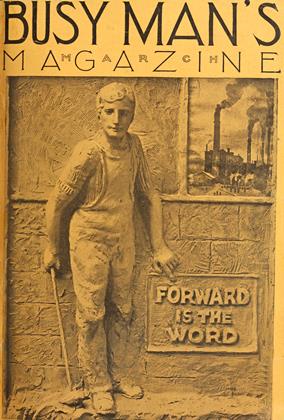