“One of the stingiest men of the day ! His contributions to charity and philanthropic schemes are so small as to be almost ludicrous for a man of his wealth.”

The speaker, an architect of my acquaintance, had been indulging in a wholesale condemnation of a group of Canada’s wealthiest manufacturers, whilst we smoked an after-dinner cigar at the club.

My friend is naturally of a grouchy disposition and so long as he levelled his sarcasm at men outside my own limited circle of acquaintance, I was content to let him talk, half-believing and half-disbelieving his statements. It is oftentimes amusing to listen to the diatribes of such a man.

But when he suddenly veered around and, in the terms I have set down, proceeded to demolish the reputation of a man I knew and esteemed, I at once took the defensive. How often are we content to listen passive-

ly to attacks on men we do not know, while we are so keen to take up the cudgels for our friends, and yet the former are probably quite as deserving of our support as the latter.

“One of the stingiest men of the day !”

That was surely a hard statement to make, and yet might there not be some ground for such an accusation, considering the matter from the outside? In vindicating my friend, as I hope I did completely and finally, this question came forcibly to my mind. There are probably hundreds of men throughout Canada who have to bear the brand of parsimony, who are, by force of circumstances, compelled to be something quite the reverse of what they really are by nature.

A business man, who has gone through the hard and oftentimes bitter experience of building up a big industry, knows well what it means to be money-poor. But the great pub-

tion after application and appeal after appeal lie turned a deaf ear. The churches were ready to curse him ; the university to abuse him. He simply did not rise to the occasion as everybody believed he ought to do, and as nearly everybody thought he could do, if he wanted to.

But there was at least one man, who was a little wiser than the rest. He knew Mr. Massey, and he understood the situation. That was the late Dr. Potts, the agent for the Methodist Church. Dr. Potts was aware that it wasn’t inclination that deterred the great manufacturer from giving, that he was as anxious to forward the cause of his church as any other man. He was simply money-poor. All his much-maligned wealth was tied up in his business.

So Dr. Potts watched the situation and kept in touch with Mr. Massey.

One day, the clerks in one of the Toronto banks were surprised to see the dignified agent of the Methodist Church come rushing into the bank with unwonted haste. He held in his hand a cheque for a large figure, signed by Hart A. Mas'sev. Hastily slipping it through to the ledger-keeper, he exclaimed, “I want that cheque accepted at once, before the balance disappears.” And that contribution was

the beginning of a series of princely benefactions, which have been continued since Mr. Massey’s death, by the trustees of his estate, and which have just culminated in a splendid gift of new buildings to the University of Toronto.

The objective which Mr. Massey had in view justified the means. Had he given generously during the perkv'. of business-building, even if that had

been possible, he might have enjoyed a better reputation, but he would certainly have reduced the ultimate amount available for philanthropic work.

The manufacturer himself is often proportionally the smallest salaried official in the factory. Many a manufacturer is content to draw a modest income from the industry in which he is engaged, just that it may become

stronger. He is willing to pay high salaries to salesmen and department managers and to raise mechanics’ wages to the maximum, without claiming an extra cent himself. He is, of course, working for the ultimate good of the industry, believing that later on he will be rewarded for his renunciation. But in the meantime he has not only to put up with inadequate returns, but he has also to bear the reproaches of the crowd of agents and collectors, and sometimes his own employes, who think he is in a position to give large sums to charity, when he is not.

The attitude of the man or organization which seeks to draw money from the wealthy men of the country is oftentimes an extraordinary one. Apart from their misunderstanding of the rich man’s motives and their consequent accusations of penuriousness, which to a certain extent are natural, when the exact circumstances of the case are not known, their treatment of these men, when they do give money and are in a position to repeat their gifts from time to time, is frequently not less surprising. They seem

to take it for granted that these gifts are always available and from acting as humble suppliants for assistance, they turn into dictators of what should be given and to what purpose it should be assigned. If such a course of action arouses resentment it is not to be wondered at, and if the rich man diverts his gifts into other directions, these people have only themselves to blame for it.

The path of the rich man is by no means a bed of roses. The public seem to forget his services to the country in building up industry, in providing employment for hundreds or thousands of artisans, in conserving national resources and in opening up new channels of trade, and think only of his outward personal attitude toward philanthropic movements. In judging a man, all these considerations should be included, and it is not fair to the manufacturers and big business men of Canada that they should be compelled to bear the brand of parsimony, without having all the circumstances of the case weighed and taken into account. 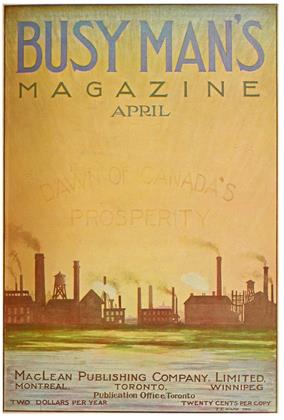