OF all the shipyards in the world, probably the most familiar, by name, at any rate, to Canadians, is that of Harland & Wolff, at Belfast, Ireland. There is an excellent reason why this should be so, though very few people may be aware of it, and that is because the man who has made

this great yard, the famous place it is to-day, was born in Canada.

To use an Irishism, Lord Pirrie was born out of his native country, for he first saw the light in Quebec in 1847, his father’s death being the reason for his removal to the family home in Ireland, where his personal ties and in-

dustrial associations became fast-rooted. Most of his early years were spent at Conlig, in County Down, within sight of the far-famed Helen’s Tower, erected by another great Irishman, Lord Dufferin, to the memory of his mother. He was educated at the Belfast Academical Institution until the age of 15, when he was apprenticed to Harland & Wolff, who were then beginning to come into prominence under the auspices of the

late Sir E. J. Harland, and Mr. G. W. Wolff, who is now member for East Belfast. In a small yard in the vicinity of what was known as the Queen’s Island, a sort of recreation ground, the Englishman, Mr. Harland, started the great firm of which Lord Pirrie is now the head—Messrs. Harland & Wolff, shipbuilders and engineers, with which is associated John Brown & Co., of Sheffield and Clydebank.

Mr. Harland had a practical knowledge, a great understanding, with a sense of the artistic and a marked

business capacity, which, together with the capital brought to the firm by Mr. Wolff, found expression in excellent construction and high workmanship in the field of shipbuilding. '

It was under these able pioneers that young Pirrie began his career. He found lodgings close to the works, where he arrived often first in the morning, and remained till last at night. He was determined to know all that could be learned, and succeed-

ed so well, that Mr. Harland, who knew7 a good man when he saw him, made him his partner in 1872. The advent of Mr. Pirrie worked wonders in the advancement of the firm, for everything he touched seemed to prosper. At the end of but a few years a vast industry covered and hid every vestige of what had been the Queen’s Island recreation ground.

Lord Pirrie’s first and greatest achievements were with the White Star Line, for, having built them various smaller steamers successfully, he built the original leviathan, the

“Oceanic,” of 17,000 tonnage. Not resting at that point, he increased dimension after dimension until the building of the “Adriatic,” which almost reached 25,000 tons, while there are now vessels in construction in the yards very far in advance of the “Adriatic.”

Perhaps much of Lord Pirrie's success is due to the fact that he was never content to sit at home and surmise. He sailed all over the world in

every kind of ship, thereby finding out for himself every kind of requirement that went towards their perfecting. He had the capacity for not only imparting the knowledge thus obtained to his partners ánd other shipbuilders, but for making them think with him. In this way he impressed upon others that the future belonged to big ships. Lord Pirrie’s irresistible personality has, perhaps, been the main factor in giving him as much success in the selling of ships as in the building of them, and concerning this capability a story is told of him during one of his visits to Liverpool. A

large shipbuilder had a long and serious face when he met his colleagues on the Exchange. He was asked, “What is wrong?” “Well, the fact

is, ” he said, “Pirrie has been over and has persuaded me to order a ship, and I am puzzled to know what to do with

Lord Pirrie has proved himself to be the saviour of Belfast and its surrounding district. Ballymacarrett, one of the formerly wretched suburbs,

with a population of but a few thousands, which has now increased to about 100,000, owes its prosperity to the employment meted out to it by Messrs. Harland & Wolff. The number of hands employed in the works varies between ten and twelve thousand, the weekly wages paid out by the firm amounting to about £20,000. Lord Pirrie owes his wonderful success and his eminent position in life entirely to his own industry, sagacity and unfailing energy; also to his great spirit of optimism which has gone far in carrying through his many and varied undertakings. This latter qual-

ity has made him as big a ship-salesman as he is a shipbuilder.

His success socially Lord Pirrie owes to a great extent to the valuable co-operation of Lady Pirrie, to whom he was married in 1879. The endowment of the Victoria Hospital in Belfast, during the two years in which Lord Pirrie held the position of Lord Mayor, was successfully carried through, owing largely to the popularity and energetic philanthropy of his wife. Lady Pirrie’s extravagant hospitality has endeared her to all Ulstermen, and has done much in helping her husband to hold the appreciation of the citizens, even when his politics turned in the direction of marked opposition to their own.

Lord Pirrie became High Sherriff of Down for one year, and he was also High Sheriff for Antrim, in both of which counties the City of Belfast is situated. During later years he has devoted more and more of his time to public life. In 1898 he was made a Privy Councillor, and during the first year of office of the present Government, was created a peer of Great Britain. In the midst of the stress and strain of public life, however, Lord Pirrie has never neglected his business interests, which have spread in all directions. Besides being chairman of Harland & Wolff, he is on the board of the African Steamship Company. the Ocean Transport Company, the White Star Line, the London and Western Railway Company, the London Citv & Midland Bank, the Eastern Telegraph Company, the International Mercantile Marine Company, Frederick Leyland & Company, the British & North Atlantic Steam Navigation Company, the Mississippi & Dominion Steamship Company, the Wilsons & Furness-Ley-

land Line, and of the Scottish Widows Assurance Fund. He is on the committee of Lloyd’s, is a member of the Viceregals Railways Commission, is on the Conciliation Courts Panel of the Board of Trade, the Lighthouses Committee, and the Council of the Institute of Mechanical Engineers. He is vice-president of the Institute of Naval Architects, is Master of the Worshipful Company of Shipwrights, and is pro-Chancellor of Queen’s University of Belfast—a truly remarkable list of achievements !

Last May, in the Pall Mall Magazine, Lord Pirrie published an interview with the popular author, Mr. Harold Spender, on the subject of the naval crisis. “Personally,” Lord Pirrie said, “I think that the danger has been exaggerated. I think there is an element of scare in this talk about German building. What acceleration there has been is, I think, quite possibly to be accounted for by the explanation given on high German authority—that the ships have been put forward in order to give employment in the empty shipbuilding yards of Germany. Of course, I may be wrong —they may, of course, be deceiving us ; but I do not see any absolute proof of that.

“I will take our firm as an instance. We could build two Dreadnaughts at once, and make machinery for four more. And if that is true of one firm alone, what could not be done by all the great shipbuilding yards in England' combined? Why, there are yards idle in England at the present moment that could turn out a greater number of Dreadnaughts than all the German yards put together.”

“Another thing that has frightened public opinion very much has been the alleged revelations as to the development of Krupp’s yards and workshops. Do you regard that as very ominous?”

“Of course, it is impossible for me to dogmatize, but I can say this—that to my knowledge Krupp’s development has been to a large extent for mercantile work, as well as naval. Be-

sides, of course, the German system of preparing gun-fittings and guns simultaneously with the ships has meant a corresponding development in Krupp’s along with the laying down of the Dreadnaught keels. That would happen in any case, even if there were no acceleration of building.”

In the early part of 1908 Lord Pirrie was appointed Comptroller of the Vice-regal Household of Lord Aberdeen, in place of Lord Powerscourt, though the salary of £800 a year could hardly have been a temptation to the wealthy chairman of Harland & Wolff. Later in the same year, the King conferred the honor of Knight of the Order of St. Patrick on Lord Pirrie, a distinction which had formerly been held by the late Earl of Rosse.

Last year Lord Pirrie bought the magnificent estate of Witley Court, on the Lea Park estate, in the County of Surrey, the sale including 1,500 acres of land adjoining the property of the Earl of Derby. The estate was once the property of Whitaker Wright, the ill-famed financier, who ended his life with the turn of fortune.

Lea Park lies in one of the loveliest tracts of country in the south of England, and extends from the Village of Witley to the famous Punchbowl and Gibbet Hill, on Hindhead. It formed a portion of the Hindhead Deer Forest of Queen Elizabeth, and commands a view over a glorious expanse of open country. The estate was put up for sale in 1904, and the bidding was withdrawn when the hammer reached £145,000, the price that Lord Pirrie had to pay for it may, therefore, be surmised at. Whi-

taker Wright had extended the construction of a wonderful home for himself, and at the time of his tragic death had expended no less than £700,000 upon it.

The mansion is built of stone in the early English style, and for its adornment valuable pieces of statuary were obtained from various parts of Europe. A stone wall, four miles long, and which cost in itself £37,000, encloses the park, and there are five stone lodges, which cost £2,000 each. But perhaps the greatest wonder of Witley Court is a large hall, constructed of glass, which has been built under one of the several lakes that adorn the grounds. This remarkable hall at the present time serves as a billiard room.

It is but the other day that Lord Pirrie acquired the English rights of a puncture-proof tire, an invention which is destined to do away with the tire troubles of motorists, and which has been discovered by a German chemist named Pfleumer. The idea is to replace the ordinary inner air-tube by a substance, which has been given the name of “Pfleumatic”—a compound of gelatine, glycerine and other substances, combined by a patent process with compressed air. The substance is poured in a molten state between the wheel-rim and the outer tube. It is claimed that such a puncture-proof tire is equal in resiliency to the ordinary touble tire.

The regrettable fact in this great man’s career is that he has no children to carry on his labors—no heirs to whom he can pass on his vast possessions—his title dies with him.

What a pity that most of our most brilliant and original ideas did not present themselves to us first.—Jean Milne. 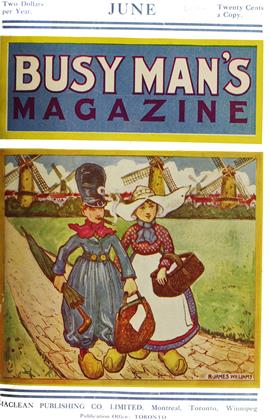