in the world, from many standpoints. In the first place, there is more money spent on it than op almost anything else ; and it also has to do with the world’s biggest problem—the world’s biggest problem to-day is that of distribution of the goods from where taey are to where they ought to be. Advertising is one of the big factors in that distribution.

Two other factors of distribution are transportation and population. We must have the population first to create the demand, and then we must have the transportation, and I believe today that the question which is agitating the country—that of high prices and the increased cost of living—is largely a question of distribution. If goods were properly distributed in certain parts of the country there would not be such high prices.

Now advertising, in my opinion, needs one thing most of all, and that is: it needs to be advertised.

I think most. advertising men are too close to their businesses to realize that everybody does not believe in advertising; that a great number of people—thousands and hundreds of thousands of people—still believe that they buy goods cheaper from concerns who don’t spend big money in advertising than from those who do. Of course,

those of us who are close to that proposition know that is wrong. We know that advertising creates a demand, and creates it in such volume that we can afford to make, and do make, articles cheaper, and market them for less money than otherwise could be done. But lots of people need to be told that.

Those of you who have traveled abroad know that advertising is unknown in Europe; over there the surest sign that you are a fakir is that you advertise. Advertising in this country has gone through a great change in the last ten years—you will all admit that—because there have been more integrity and more business methods put into it than ever before. But many people yet, as I have said, don't believe in it; and it is up to the advertising men themselves to teach people to believe in advertising.

Now salesmanship gives individual lessons, while advertising conducts a public school, because a salesman is privileged to talk to only one or two persons at a time ; but the advertising man is a man who is talking to millions of people at a time.

In final analysis, what is the object of advertising and salesmanship? To distribute goods at a profit. How can it best be done? By teaching the people.

confidence than advertising, because big advertising looks like big sales, and unconsciously creates confidence in the minds of the public.

Now, I believe, gentlemen—and I am talking to you plainly as an advertiser, as a man who spends his money with you—I believe if there was ever a time for specific statements in selling the goods you are dealing in, that to-day is the time—the direct statement period—when people are interested in knowing exactly why. Today is the time for reason-why advertising.

I have been in the manufacturing business all my life, and I found out a few years ago why it was easier to make things than to sell them. Anybody with money can go into the manufacturing business, because money can buy machinery, materials, and the services of men. But it does not follow that because any man can make things that he can sell them.

As to the selling proposition : When a man makes a sale, that sale does not take place in the order-book or the check-book or the pocket-book; but every sale that is made to-day—whe; ther it is a paper of pins or a railroad —‘first takes place in the human mind. Fortunately for us, humanity has always wanted teachers, and the man who wants to succeed to-day will go into the teaching business and convince the people to have confidence in him and in what he has to sell.

Advertising and salesmanship form a connecting link between invention

and use of any article. I can say without fear of contradiction that advertising anff salesmanship have pushed the world ahead commercially faster than anything else. Why ? Because they teach the people that these inventions are the things they ought to have, ; and because the best invention in the world would be useless, valueless if people did not know about it and use it.

I go a little farther, perhaps, than some advertisers do in this matter of postal rates which the Government is agitating just now. I think every publication should stand its just proportion, but I should hate to see any discrimination which would place advertising on a different basis. I honestly believe that the advertising section and the advertising pages of all publications are just as much disseminators of news and as important in informing and teaching the people as the editorial pages are. I know a great many people who wouldn’t take a magazine if the advertising was omitted.

Coming back again to the subject of salesmanship, printed salesmanship —what is salesmanship? Salesmanship, in last analysis, is nothing more or less than making the other fellow feel as you do about the goods you have to sell.

And right here let me say that in a great deal of advertising copy we shoot over the heads of about nine-tenths of our readers. You are appealing to a man’s mind when you sell him something; and you cannot convince him until he understands. He will not understand unless you put it in Anglo-Saxon words, the smaller the better—so that the man who has no education can understand what you are talking about ; then it is a cinch that the college graduate will.

If I were absolutely sure I could sell all our output during 1910, 1911, and 1912, and had a guarantee of it in my pocket, I wouldn’t spend a dollar less than we are spending to-day in advertising.

Because my vision of our business is not bounded by the year 1912. We want to continue to advertise in order to insure that our business will continue. When you shut off advertising you shut off your source of supply. In order to sell one thousand automobiles we have to convince a million minds.

There are, in my opinion, two things that are hurting advertising. First, we will have to clear up the agency situation, and convince people that agencies have the first essential to success—absolute honesty •

And the second thing is no less important than the first, and that is that publication circulations shall be just what they are presented to be. If I buy 5,000 axles for automobiles, and they only deliver 4,000, you can rest assured I don’t pay for the fifth thousand ; why should it be different in advertising?

might call, to use a slang expression, too much “hot air” in advertising.

There is no mystery about writing good copy; there is nothing to it but good, common, hard sense. That is all there is to advertising anyway.

Writing copy is to a very great extent saying to your reader' what you would say to him if you were in front of him.

I also believe that the first few lines or first paragraph in any advertisement is the most important, because whether or not a man reads all the way through depends wholly on you.

I want to say again, in conclusion, that I believe that the publisher, the advertiser and the public are all bound in a great community of interests in this advertising business ; because just in proportion as the publisher keeps his sheet clean—keeps his editorial page right ; obtains the reputation of being too pure to be bought, too brave to be bullied—does he make those blank pages that he sells valuable to advertisers; and just as the people believe in the character of the publication, in just the same proportion will they believe in the character of the advertising it carries. 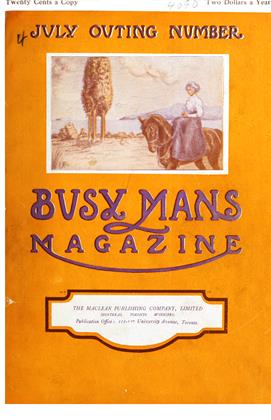