Important Articles of the Month

Click to View Article Pages
Important Articles of the Month

Henry M. Hyde once told a story of the business tenacity of the late Nelson Morris, in the course of an article in Success Magazine, which bears repeating.

Some years ago the family of the late Nelson Morris—one of the then three sovereign Princes of Packing and Provisions—wished him to retire from active business. Mr. Morris was very rich ; he had reared a family of able and energetic sons ; he was approaching the scriptural age limit. His boys knew how desperately hard the old man worked, and they feared the strain would shorten their father’s life. With filial affection they urged him to give up hard work. Finally, as the result of much urging, he agreed to a "trial order.” He would take a long and complete vacation and see how it agreed with him.

Accompanied by a few friends, Mr. Morris started to visit a famous resort in the mountains of the West. Arriving at their station the party disembarked. At one end of the platform a freight car was being unloaded. The keen Morris eye noted that the car contained provisions from Packingtown. A second glance realized the fact that the goods were being unloaded in two great piles, one containing nothing but Armour nroducts, the other only hams and bacon from the Swift warehouses. All the old man’s business pride flamed into instant fury. The car did not hold a single package marked with the Morris brand. A moment later the vacation seeker was at one end of a long-distance telephone wire, and the Colorado manager of the Morris interests was bemg asked in a rasning voice how it hannened that a car of provisions could be unloaded anvwhere on earth, one third of which was not loaded with the Morris nroducts.

On the same trin Mr. Morris was taken out to visit a famous ranch. Its owner exhibited with pride his big herd of fancv cattle. Tnstinctivelv Mr. Morris ran his exnert and professional eve over the bunch, and an instant later he was making the gasning ranchman a snot cash offer for the lot.

On the whole Mr. Morris found that his complete and absolute vacation did

not bore him nearly as much as he had feared. A little later he was finally persuaded to make his retirement complete. Careful plans were made and carried out for turning over the control of the house to his sons. And, on a day, Nelson Morris woke to find himself entirely out of the game. That whole morning the old man fussed about the house—nervous, worried, and irritable. At noon he had no appetite. Half an hour later he disappeared, and shortly after one o’clock he was back at the yards to stay, with the reins again in his firm hands and a new twinkle in his eyes.

Mr. Morris was the type of the old school of business men who could not retire, because playing the game was the one thing in the world which most appealed to them. To quit meant—almost always—decay and death.

But while Mr. Hyde expresses admiration for the men who can’t quit, he believes that it is the last test of greatness to look one’s self in the face and admit that the indispensable man does not exist.

That is a wise old story which relates how the junior partner came to the head of the firm in distress. "Young Jones is going to leave us,” he said. "Perhaps if we’d raise him a couple of thousand he’d stay. I don’t see how we can get along without him.”

"You say we can’t get along without him ?” questioned the senior.

“Well, give him two weeks’ notice this afternoon. That’ll give us a fortnight to look around and fill his place. Just think what shape we’d be in if he should up and die on us overnight.”

Let any man realize how easy his place may be filled and it becomes comparatively easy for him to retire—provided that is what he really wants to do. Nor is it necessary, before embarking on his own private and individual search for happiness, that he shall have accumulated a sufficient competency.

Ten years ago a young man went to work in a large department store as a clerk at the ribbon counter. He was diligent, keen, clever. Presently his

work was noticed by the head of the firm, who was famous for the way in which he detected and rewarded modest merit. The young man’s salary was twice raised. He was promoted. A little later he was raised to the position of usher. He was looked upon as one of the coming men in the big business. Then, suddenly, five years ago, it was announced that he had voluntarily resigned. He had bought a little fruit farm in Michigan, to which he and his family had retired. His fellow climbers on the ladder were inclined to think him a fool. Late in the fall he came back from the farm and took his old place of usher. In the early spring, when the holiday rush was well over, he disappeared again. Ever since he has followed the same routine—eight months on the farm, four in the city, at the old job. Voluntarily he has given up the very flattering possibility that sooner or later he might have become one of the many junior partners in the great business.

His philosophy of life is very simple —a surprising number of people are beginning to think it wise.

“My wife and I have always liked the country,” he says. “We like to put in the spring vegetables, to watch them grow and to market them successfully. We like to work, with the peach and apple trees ; to take care of the ducks and chickens : to live out in the open, with lots of fresh air to breathe and a little lake to fish and swim in. At the same time we don’t like to work too hard ; we enioy life in the city, too. So we talked it over and decided that we couldn’t afford to get rich. It would cost too much. Now we’ve got just about what we want most. Our farm brings us a good living every year and the store is glad to have me back during every rush season.”

His former associates see, now, that he has come nearer than most of them to the realization of a definite ideal.

The retired business man, however, really never ceases working, for he merely transfers his activities into new and pleasant channels.

Thrice wise and blessed, then, is the business man who, in the years of his activity, finds and cherishes a pleasant hobby. And the hobby should be one in which its owner finds a real and compelling interest. A half-hearted hobby is almost certain to spill its rider.

A Chicago millionaire grew old and tired. His only child, a son, planned to persuade his father to retire by ap-

pealing to his love for trotting-horses. Out of his own funds he bought for five thousand dollars one of the fastest trotters in the country. But he knew full well that if he told the truth about the price paid for the animal the old man would look upon it as a piece of wild and criminal extravagance. So he told his father he had obtained the horse for six hundred dollars.

“There, father,” he said, “is a present I’ve bought for you. The horse has a record of 2.18. I reckon he can throw dust in the faces of the fastest trick the boys have got over at the West Side Park.”

That afternoon the old man won half a dozen brushes at the West Side track. He came home convinced that at six hundred dollars the new horse was a great bargain. He congratulated his son on the shrewdness he had shown in picking it up.

“And now, father,” the young man urged, artfully, “I want you to give up business, for a while anyhow. I’ll be on deck all the time, and there’s nothing particular requiring attention just now.”

“We’ll see, Johnny, we’ll see,” was the nearest the old man would come to a promise.

For the next two weeks, however, he did not go near his office. Twice a day he took John R. out in the speeding buggy. It was great fun. Business seemed to be altogether forgotten.

The fond son concluded that his stratagem had been splendidly justified in success. The color came back to his father’s leathery cheeks. With each day’s sport he seemed to grow younger, stronger, more in love with life.' Finallv one evening, looking out of the big front windows of his ancestral home, the young man saw his father come walking un the street. There was a most youthful jauntiness in his springy gait. In his right hand he carried a long buggy whip. The old fellow burst into the house with boyish boisterousness.

“Well, Johnny, son,” he cried, slapping his boy on the back. “I’m even with o]d_ Seth Bullock at last. I’ve been waiting twenty years for this chance !”

“What have you done father ?” the young man asked, with a fearful premonition.

“Done ? Done Seth ! Done him good, too. You paid six hundred dollars for John R.—the whole outfit, didn’t you ? Well, I stuck Seth for twentyfive hundred for the horse and buggv. Here’s his check for it, too. When he handed it to me I walked over and fook the whip out of the socket.

‘Course, you understand, Seth,’ I said, ‘that the horse and buggy don’t include this ?’ ‘Yes, I understand, John,’ he said, and then he just laughed. But say, wouldn’t he be sore if he knew he’d paid more than four times what the rig cost ?”

Then the young man understood, nnally, that his father was hopeless. So when the estate came into his own hands, in order to make sure that he should be easily able to retire from business, he very promptly announced that he never intended to enter it. 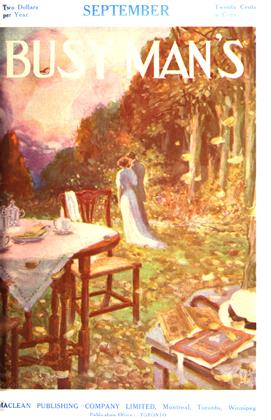