THE woman waited. You could see that the strain of waiting was telling on her strength. Her face was drawn. Her attitude was tense. The wind outside drove the snow with sudden fury against the window and then retreated, muttering. Lights began to glimmer in the streets outside the hospital. A few pedestrians, heads down to the cold gusts, hurried past. The stampeding winter air charged upon the walls of the great building again and pressed hard on the glass of the waiting-room window. The storm crooned and wept and shouted in some haunted cranny of the building overhead, near the roof outside. The woman heard nothing. Her eyes were haggard.

Everything in the waiting-room of the great institution had been carefully selected to convey cheerfulness, and yet it was so cheerful as to defeat its own aim. Certainly it was not cheerful to the woman. To her, as to most of the world, nothing could be more discouraging than this cheerfulness. In a dull way she found herself hating the room as she sat there. She thought vaguely of the hundreds who must have sat waiting within those four walls. The walls must have extracted from each of them something of the history, the personality, the emotions of each. They must have heard thousands of messages from the mysterious, iodoform-smelling rooms beyond the turn in the main corridor, where

some died, some recovered, and some—merely lingered on toward indefinite, inevitable death. The woman wondered with still melancholy what the message for her would be—what would be the result of the operation. She caught herself folding her hands, mentally and physically, and preparing for the worst they could tell her of her son.

The door opened and a young man was admitted. He was of the style which is generally called “nice.” His face was fresh. His eyes were bright. He removed his coat and commenced an inspection of the room with his eyes. They were nervous eyes. He was whistling the while the air of a little tune, over and over again. That, too, was nervousness. And yet he was very cheerful. The woman watched linn go to the window and look out at the storm, smiling 10 himself. Wheeling suddenly, he met her glance.

"Awful bore, this waiting,” he remarked, crossing the floor and taking a chair nearer hers. “Don t you think so?”

“There are—worse things,” replied the woman in a low voice.

“Been waiting long?” with a swift glance that comprehended her strained white face, and the mourning costume.

“Some hours. It is my son. I will know very soon now.”

He made a little sound of sympathy and his eyes expressed that he understood what the waiting meant for her. “An operation?” he asked.

“Appendicitis. And he is not very strong. .”

“George, that’s rough! But he’ll pull through. I’ve been there myself. Pretty low, I was, too. But now—you see?—hard as nails!”

He looked it. The woman say his eyes seek the door.

“You, too, are waiting to—to hear of someone?”

“Yes,” he said, though he appeared almost as though lie had not heard the question, and when

he spoke agam it was with reference to the woman’s son again.

“It is not so much a question of vitality,” he went on, after a moment’s abstraction, “as the determination not to knuckle down. I know a girl who’s been ill mostly all her life, but she’ll never admit she can’t do everything anybody else can do. 1 never knew a person that was so—so alive. It’s as good as a tonic just to see her. You would think, to hear her talk, that she was the most fortunate girl about. She takes her medicine—and it’s the bitterest kind, too—without a whine. And when she’s struck to earth she struggles up—and on again—pluckiest kind of a sport—she is.”

The woman seemed hardly to hear what he said.

“My son’s constitution is poor,” she answerel. “He gives up easily. That is what terrifies me so— that he will aie just because he does not care enough to live. He was always like that. All through school he could have done things if lie only would. I used to tell him: ‘Anson,’ I’d say, ‘it all lies with yourself.’ But he paid no attention. I could see for him, but I could not make him do. It is that that makes me anxious now. He gives up so easily. And he is my last.”

“Wish you could see this girl I was telling you about. Lately, she’s not been quite so well, which means she is pretty bad. But, Lord! you d think there wTas a festival going on at her bedside. She s kept the whole ward cheerful. They are fairly shamed into smiles when she takes things so well. Whenever I see her, I wish everyone who is in trouble could see her .too. It would do them good. Talk about religion ! She’s it! Always just the same. Always sunny. But her eyes—they give her away. They hurry—hurry. They never catch up with all the beautiful things she sees in life. They want— they want to live so. And yet your son, you sa3> does not? Mighty rum world, now, isn’t it?”

Again lie looked toward the door, and again left, his chair and walked about, while the voice of the tempest outside shook windows.

“He’s sure to buck!” he told the woman, coming back to her side of the room. “You just take my word for it, he’ll be all right.”

“If—Oh, if I could only believe that! But so many things have been taken from me. I am afraid —afraid. You are young. You don’t know. It would be different if it were only one’s self, but one lives in one’s friends, one’s family. When they die —I die too. All but the shell.”

“It’s all in the way you accustom yourself to look at it,” said the boy. “If you think of yourself only, it is, as you say, beastly hard lines. If you take a larger view, you see that somehow everything works out to the good—at least, that’s what this girl thinks. She is always quoting Gilder’s “The Light Lies on the Farthest Hills.” That’s her gospel.”

“Tell me more about her. It will keep me from thinking—and there’s something about her that—”

“You notice it, too?” his face lighting. “But I’m not surprised. That’s the way she wants people to feel about her. She’d like to feel, she says, that she was still living in us. Rather responsible it makes a fellow. But she’d do her part, trust her! She’s not much but spirit now, I tell you, just to be near lier, is a benediction.”

“Is there no hope for her?” and, she added before he could reply, “Is it she you are waiting to hear about?”

Before he could answer there was a rustle of starched dresses outside the door. A nurse entered with quiet swiftness and crossed to the woman, who rose, trembling in every limb.

“Your son has passed successfully through the operation. The doctors believe there is every hope for his recovery.”

She turned to the boy, and lowering her voice, “Your sister,” she said, “died seven minutes ago.” 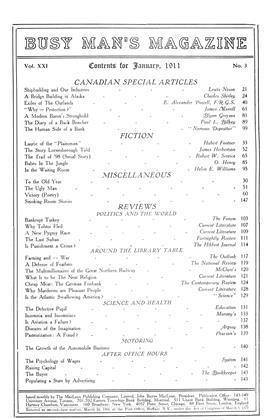