Editor's Note:—Compare the Bank of England or any of the Old Country banks with the average Ca nadian bank, and you will observe, on the part of the Canadian bank, a much more elaborate standard of building and standard of interior equipment. Even in the United States one finds the banks housed, on an average, much more simply than in Canada. The reason for this lies in the fact that the very banks of this country, the most conservative of our institutions, have come to realize that where there are two men in the same business—two banks in the same town—there must be a constant struggle between the two for the business of the place. In ordinary business, the competitors have recourse to the advertising columns of various publications, but the Bankers’ Association has set a ban upon this medium, and, the natural necessity for advertising has found expression in architecture. All over Canada the “Green Temple’' bank has been scattered. Sometimes the design is good: sometimes very bad. Such as it is, it is the one form of advertising in which our banks indulge.

WHEN the president of the First National Bank of Chicago, which occupies one of the handsomest bank buildings in America, accompanied by his youthful son, was being shown, one day, over the Bank of England by a faithful old official of that famous institution, the boy remarked, “I don’t think this is anything like as good as your bank, father. It’s such a gloomy old place!” Before the father answered, the old guide retorted. "Banks that are not very sound always have to put on an extra appearance, young sir.”

If the old man’s estimate of the case be true, then the banks of Canada must be in a dangerous condition, for outwardly, at least, they make a very fine show. It is remarked by visitors to the Dominion

that the banks of this country have been prodigal in their expenditure on the erection of handsome buildings. Of course, one might well expect the head offices of the institutions in Montreal and Toronto to be impressive, but to find the branches located in small towns and cities so splendidly housed is surprising.

The banking business of Canada is today in the hands practically of twentynine banks, which have received charters from the Government. They are known as chartered banks. Their capital ranges all the way from $14,400,000 in the case of the Bank of Montreal, to $301,300 in the case of the smallest bank—the Weyburn Security Bank. Among them they have between two and three thousand branches placed all over Canada, with a

few situated in the United States, Mexico and the West Indies. The Canadian Bank of Commerce holds the record as having the largest number of branches—in Canada and outside Canada.

Restricted in the character of their investments by the Banking Act, under which they operate, and with superfluous funds at their disposal, many of the banks have turned their attention towards erecting substantial and impressive buildings, which would not only provide permanent quarters for their business, but would serve as an advertisement, as well. In some cases, notably in that of the Traders Bank of Canada, which has the distinction of owning and occupying the tallest office building in the British Empire, they have not only erected buildings for their own use, but have provided offices on the upper floors of them for tenants as well.

The dawn of the fine building era in bank architecture has been coincident with an important change in banking methods. Not so many years ago banks in Canada adopted a very superior attitude towards the public. They gave the impression that in taking and caring for the people’s money they were doing their customers a great favor. The banks’ employes were often accused of being arrogant in bearing and “snobbish” in manner. To-day there is a marked difference. The spirit of competition has set. in and from being outwardly indifferent to the public, bankers have begun to cultivate their good graces. They make no secret of it that they want the people’s savings and they do all in their power to influence them to deposit their money with them. Fn this campaign of luring the public into

Notwithstanding the dictum of the old guide in the Bank of England, a fine-looking and substantial building in Canada, at all events, is consistent with substantial character. It conveys an idea of solidity and strength and leads the depositor to believe that his money is absolutely safe there. The bright and polished interior with its marble floor, its mahogany furniture and its shiny brass fittings, so frequently to be found in Canadian banks, enhances the impression, while the humble operative or factory hand who comes in to deposit his dollar, is, perhaps, a little gratified by the courteous attention bestowed upon him by the clerks.

The growth of the amount of deposits in Canadian banks as a result of this careful fostering of the field, is noteworthy. In 1890, the total deposits of all the chart-

ered banks were only $153,000,000. Today the Bank of Montreal alone has deposits in its keeping of $150,000,000, while the Canadian Bank of Commerce has over one hundred million dollars. When there is so much to be had and such a rapidly expanding field for investment, it is not to be wondered at, that the banks are doing all in their power to secure the country’s spare cash.

There is, however, a circumstance which has led the banks to adopt fine buildings. Formerly, when a bank wished to open a branch in a town, it was customary to rent a shop for the purpose, preferably one situated on a central corner, and by rearranging its interior, fit it for banking purposes. In time, the bank outgrew its place of business and, because it could not afford to leave the location, it was forced to buy the property, tear down the old building and put up a new one in its

place. When this is done, it was always advisable to erect a building that would be large enough for future expansion as well as a credit to the town.

Another circumstance is one which applies principally in the West, where towns crop up like mushrooms in a night. The average western town is exceedingly self-conscious and the action of a bank in ]mtting ii]) a good building is considered evidence of its faith in the future of the town and its willingness to identify itself

with the fortunes of the community. As a result, in many a western municipality, the bank building is the most imposing structure on the main street and one that will long be pointed to with pride by the inhabitants.

There are, of course, still other motives which govern a bank in its building policy. The comfort of its staff has sometimes a good deal to do with the matter, and, while, the average Canadian bank is by no manner of means a philanthropic institu-

lion, it must be admitted that it takes good care of the health and welfare of its employees. When leased premises are unsatisfactory from this standpoint, there is little hesitation in providing more suitable quarters. In the West especially, where conditions are crude and the life is rough, it is oftentimes impossible for the eastern bank clerks to secure comfortable and agreeable living quarters. Unless the bank helps out by supplying accommodation in the bank premises, the clerks are forced to put up with most unpleasant and disagreeable surroundings. So the bank puts up a good building and there the clerks find suitable quarters.

Tt is a somewhat difficult matter to arrive at tin1 amount, of money which Canadian banks have expended in bank premises, for the reason that the Government returns on this point, are quite obviously incorrect. For instance, the Bank of Montreal carry their buildings at the value of $600,000 on their balance sheet, whereas the beautiful head office building

alone probably cost over a million dollars. At the last annual meeting of the bank, however, the president made the statement that the total value of the 147 bank buildings owned by them was between seven and eight million dollars.

In the case of the Canadian Bank of Commerce, the figure given in the Government returns, viz: $2,660,228 represents only about half the actual value of their property. The balance is vested in a species of holding company, known as the Dominion Realty Company, Limited, which constructs and owns the banksmaller buildings. The company provides a certain percentage of the total cost of the land and buildings, which it acquires and leases to the bank, by issues of bonds which are readily salable to outside investors. The rentals paid by the bank are sufficient to retire the bonds in fifteen years. The remainder of the cost of the properties is provided by the bank purchasing shares in the Realty Company. 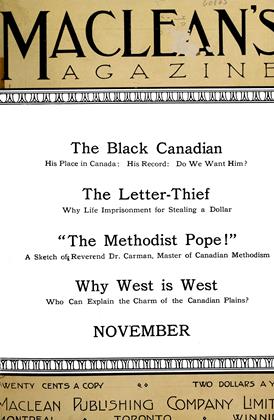