IF you read the new Novel, Howard’s End, you will meet a woman that is quite worth while meeting. She is not among the characters, and her name is not mentioned in the book. And yet behind every character in the whole story, she moves, and through each paragraph one catches vague glimpses of her that pique one’s curiosity to exasperation. In short, although you may like the whole book and though you will undoubtedly have a vivid impression of the various people that walk and talk their way through it, still it is the author or authoress of “Howard’s End” that compels one curiosity. “It” is a mystery.

Of course the book is signed and its title page includes a list of the other books written by the same author—E. M. Forster. This list mentions: “A

Room With a View,” “Where Angels Fear to Tread,” and “The Longest Journey.” Unfortunately we had not read any of these books when we opened the cover of Howard’s End, but we intend to do so. For in the author of Howard’s End exists a personality worth meeting, and we are curious to know if the other books signed by that name have the same quality.

Howard’s* End is a story without a plot worth calling a plot, without a bit of

the usual descriptive flights, without much color, without sentiment, without action, and without any particular moral. And yet you read the book with intense interest. You cannot scan it rapidly .You are bound to read it line for line. When you are through reading it you will not oe much wiser about anything save a certain class of people in England and even then you will not have gained any great new light upon the subject. You will have met two interesting sisters. Margaret and Helen Schlegel, half German, half English orphans. They are independently wealthy. They have a young dyspeptic brother and an aunt who is truly English. But she and the brother do not matter. On the other hand you are introduced early in the story to a Mrs. Wilcox, Mrs. Ruth Wilcox, the wife of a remarkably stupid, level-headed, simplesouled business man, and the mother of an equally stupid, etc., family. They are worthy people, withal, but uninteresting, except for the Mother. And just after you are beginning to see that she has qualities of her own and is starting to make friends with the Schlegel girls, she dies and leaves the Schlegels her house, which is called Howard’s End. The Schlegels do not know it and when the commonplace family find it out they de-

cide that the Mother was not responsible when she made the bequest, and they take advantage of the informal manner in which she made it, to destroy the paper, and keep the house themselves. But this has nothing much to do with the story.

In the end, the elder girl, Margaret, marries the widower. She is of a highly intellectual and remarkably well-balanced type. She is the opposite of the husband, but she “manages” him in all things. The other sister, more beautiful but more flighty, has an affair with a poor clerk with whom the sisters had come in contact and whom they had at one time tried to assist into the life of “culture” for which he longed. The affair ends disgracefully but the girl, Helen, does not act as does the usual insipid lady under the same circumstances. She admits that she lured the clerk on. She accepts her position in society philosophically.

But it is not fair to the book to try to tell the story because there is no story and yet—the thing is worth reading. As I said before the lasting impression that one has is that the person who wrote that book is an interesting person. You can’t help wondering what he or she is like. As a matter of fact it seems to be a woman that wrote it. You can gather that much by a few little turns in her philosophy. The conversations in the book are bright and original. There are no “dramatics” and only one really tense part—that is when Margaret tells her fool of a husband what she thinks of him. It is not a problem novel. It is not a study of anything in particular. It is not wonderful for the story it tells, but the whole thing bristles with originality that commands your interest. The only real way in which anyone can get an idea of the thing is to give that person some of the characteristic extracts.

The Anglo-German relations are dealt with in a way that might apply to Canadians. Their father is referred to as having said once to a German : “Your PanGermanism is no more imaginative than is our Imperialism over here. It is the vice of a vulgar mind to be thrilled by bigness, to think that a thousand square miles are more wonderful than one square mile and that a million square miles are

almost the same as Heaven. . . . Oh, yes, you Germans have learned men who collect more facts than do the learned men of England. They collect facts and facts and Empires of Facts, but which of them will rekindle the light within?” ... It was a unique education for the little girls (the heroines of the book). The haughty German nephew would be at Wickham Place one day—convinced that Germany was appointed by God to govern the world. Aunt Juley would come the next day convinced that Great Britain had been appointed to the same post by the same authority. . •. . Putting her

head on one side, Margaret (the elder of the two sisters in the story) remarked: “To me, either one of two things is very clear: either God does not know his own mind about England and Germany, or else these do not know the mind of God.” “A hateful little girl” (comments the author of the book) “but at thirteen she had grasped a dilemma that most people travel through life without perceiving.”

Then, if you are musical, take this comment on a visit paid by the two girls to Queen’s Hall, where, among, other things, Beethoven’s Fifth Symphony is rendered. This part comes at the beginning of a chapter.

“It will be generally admitted that this Symphony is the most sublime noise that ever penetrated into the ear of man. Whether you are like Mrs. Munt, and tap your foot surreptitiously when the tunes come; or like Helen, who can see heroes and shipwrecks in the music’s flood; or like Margaret who can see only.the music; or like Tibby (the young dyspeptic brother) who is profoundly versed in counterpoint and holds the full score open on his knee ; ... in any case the passion of your life becomes more vivid and you are bound to admit that such a noise is cheap at two shillings. . . . Even if you

sit on the extreme left of Queen’s Hall so that the brass bumps at you before the rest of the music arrives, it is still cheap.

. . . The Andante had . begun— very beautiful but bearing a family likeness to all the other beautiful Andantes that Beethoven has written. . . :

Helen’s attention wandered and she gazed at the architecture. Much did she censure the attenuated cupids who encircle

clad in sallow pantaloons. ‘How awful to marry a man like those cupids,’ thought Helen.”

Speaking of Bast Slatternly’s wife, the book says: “Take my word for it, that of her smile was simply stunning, and it is only you and I who will be fastidious, and complain that true joy begins in the eyes, and that the eyes of Jacky did not accord with her smile, but were anxious and hungry.”

Then this is a sample of one of the many conversations in the story. Miss Schlegel the elder was discussing Money with her aunt, Mrs. Munt.

“Money pads the edges of all things,” said Miss Schlegel. “God help those who have none!”

“But this is something quite new!” said Mrs. Munt, who collected new ideas as a squirrel collects nuts, and was especially attracted by those that are portable.

“New for me; but sensible people have acknowledged it for years. You and I and the Wilcoxes stand upon Money as upon islands. It is so firm beneath our feet that we forget its very existence. It’s only when we see someone near us tottering that we realize all that an independent income means. Last night, when we were talking up here round the fire, I began to think that the very soul of the world is economic, and that the lowest abyss is not the absence of Love, but the absence of Coin.”

‘T call that rather cynical.”

“So do I. But Helen and I, we ought to remember, when we are tempted to criticize others, that we are standing on these islands, and that most of the others are down below the surface of the sea. Tne poor cannot always reach those whom they want to love, and they can hardly ever escape from those whom they love no longer. We rich can . . .”

“Call it what you like. I call it going through life with one’s hand spread open

on the table. I’m tired of these rich people who pretend to be poor, and think it shows a nice mind to ignore the powers of money that keep their feet above the waves. I stand each year upon six hundred pounds, and Helen upon the same, and Tibby (the Brother) will stand upon eight, and as fast as our pounds crumble away into the sea they are renewed. All our thoughts are the thoughts of six-hundred-pounders, and all our speeches; and because we don’t want to steal umbrellas ourselves, we forget that below the sea people do want to steal them, and do steal them sometimes, and we forget that what’s a joke up here is down there reality . . .”

There is this too, about Death:

“A Funeral is not Death, any more than Baptism is birth, or marriage union. All three are the clumsy devices, coming now too late, now too early, by which society would register the quick motions of man.”

The description of London is good.

“To speak against London is no longer fashionable. ‘The Earth’ as an artistic cult has had its day and the literature of the near future will probably ignore the country and seek inspiration from the town. . . . Certainly London fascin-

ates. One visualizes it as a tract of quivering grey, intelligent without purpose, and excitable without love ; ... as a

heart that certainly beats, but with no pulsation of humanity. ... A friend explains himself; the earth is explicable, —from her we came and to her we must return; but who can explain Westminster Bridge Road or Liverpool Street in the morning—the city inhaling—or the same thoroughfares in the evening— the city exhaling her exhausted air? . . . London is religion’s opportunity—not the decorous religion of theologians, but anthropomorphic, crude. Yes, the continuous flow would be tolerable if a man of our own sort—not anyone pompous or tearful—were caring for us up in the sky.” 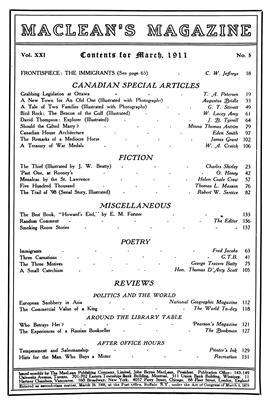