GLEN CAMPBELL, the big, lanky westerner, who called a fellow member of Parliament “a liar” on the floor of the House of Commons last Friday, did the very thing that you would expect him to do under the circumstances. He spoke his mind, and Glen Campbell’s mind is not given to mumbling.

Another M.P. had an attack of candour recently. It was the good Major Beattie, of London. It was candour within the party lines. Major Beattie was suddenly stricken with a paroxysm of disgust at the conduct of one of the Conservative members. Ile rose and delivered himself of his judgment against that member. That, too, was candour.

These two incidents are possibly the outcome of a state of irritation in the House. Is it not possible that the tempers of the various gentlemen are getting ruffled by the harrowing of the reciprocity debate?

Campbell is tall and thin and looselv strung together. He has dark eyes and a black moustache. “Tom” is fair “as a lily,” compactly built, short for his girth and a pretty solid obstacle to run up against at any time. “Glen” is older-looking. Tom” looks like a good-natured boy. Glen wears a Stetson jauntily— even wickedly, on one corner of his head. Tom—who wears a Stetson which Glen brought down from the west for him specially this session, wears his on the back of his head. In fact, these men are the most unlike of any two men in the House

of Commons—unless, perhaps, you could count Foster and Pugsley as a close second. They have just one thing in common—good humor.

You would never take them for M.P.’s. They look more like two schoolboys drifting through the corridors of the Commons, looking for mischief. To look at them, you would say that Glen Campbell originated all the mischief—the black moustache, the “wicked” gleam in his off eye —the long, rolling gait and the swing of his hands. Tom, sort of puffing along beside him, looks the part of innocence, looks as though he wouldn’t steal an apple if it was dangled under his nose and he had a shingle hitched on behind. But that’s the deceit of the pair. They go chuckling down the hall, concocting all sorts of schemes, and it is Tom who thinks them up, while Glen adds the sensational features and the shooting irons, as it were.

To see the pair sitting in the back row of the Tory side of the House, leaning over towards one another and telling stories that upset the dignity of half the people on that side of the House — except Dav-ee Henderson of Halton, who takes his jokes by the clock—you would think that the twain were a hindrance to the House and unworthy to represent the constituencies of Dauphin, Manitoba, and Centre York respectively. But every once in a while when the House goes into a Committee of Supply, Glen Campbell is on deck watching for the things that affect his riding, or Tom is poring over a blue book and thinking up questions that will make Hon. Bill Pugsley betray all his inwardness. When big questions are up they are to be seen voting consistently side by each. But when business is over and it is safe to quit, Tom nods across to Glen. Glen puts his Stetson on and Tom rolls a cigarette, and they stroll out together to plot a practical joke on Davy Henderson, or to plan how to rob the pantry of the Grand LTnion, where they room together. 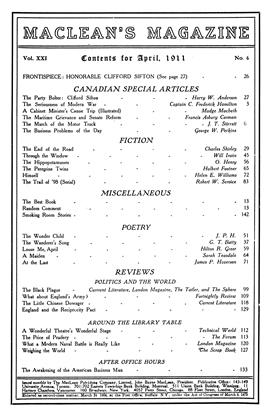