The Glory of the Cities Madge Macbeth May 1 1911

What a bit of grass, some trees, a flower and pool of clean water may mean to the most commercial town or city in Canada

THE modern business man may tell you that the glory of the cities is the wreath of smoke that sways over the busiest of them, just touched on the under side by the steeples of industry—the tall chimnies. The long-haired idealist on

the city council,—or if he is not on the city council he is Secretary of the Women’s Auxiliary of the leading church —will tell you that the glory of the cities, should be green grass and trees and running streams and fountains and free Wag-

nerian concerts. But both are wrong. A dirty smoky city is all very well. So is the pastoral beauty of a farm and the hysterics of the Wagnerian affair. But the real Glory of the modern city is when the business man has been made to see that a clean city, with a reasonable amount of green grass and parks and trees, makes business better ; and when the civic beauty faddist has been fished out of the clouds on the end of a window rod, and made to see that busyness is the basis of all the cities and that without a factorv or two, there is no sense in making parks and boulevards.

Now the City of Ottawa has made longstrides in this direction. All Canada has heard about the Ottawa Improvement Commission and Guilds of Civic Art have been supporting it as a righteous example for many moons. Some cities have been inclined to answer that Ottawa has not the industries that they have, and that while Ottawa may prink and preen herself and admire her own reflection in the placid waters of the Rideau Canal, it is Hull— ‘dirty face’ Hull, on the other side of the river, that really is busy and really is contributing to the wealth of the country. But they have no right to answer that

way. A city may be made beautiful and maintain factories at the same time. And in fact, if some of the money which many a Canadian city now devotes to its publicity department, were turned into the making of wider streets and allowing for parks and gardens within the city, they might find better results.

A city is born dirty. There are bound to be the things that have been left by the builders, the shavings and bits of brick as it were. And it is admitted that a city must first of all secure transportation facilities and industries. But after that, in the making of these industries

Nebuchadnezzar left us the Hanging Gardens of Babylon. Appius Claudius bequeathed us an aqueduct and roadway. Diocletian is remembered for his stunts in monuments and baths. Crazy Caligula beautified Rome. The di Medicis gave Florence some of her many jewels. Versailles points back to Louis XIV. The Floating Gardens of Mexico are to the honorable memory of the Aztecs. Mont-

real will no doubt live forever by the reputation of its wharves. Toronto for its smug prosperity. Winnipeg as the Master of the Canadian West and Vancouver because it has sold all its waterfronts to railways. But Ottawa shall be called a city of beauty when these other places are ten foot deep in the dust of their own business. ’ And it behooves them to wake up! To remember that clean air means better workmen and that sunlight makes brighter wits! And as for the New Littles Cities, that are springing up all over Canada, let them cherish the waterfront and the valleys and the trees. Let them remember

that the railways don’t need to be given every square inch of waterfront property, and—that there was once a man who remarked upon the value of a Thing of Beauty.

The premier has been accused of making the beautification of Ottawa his hobby —in fact, he admits it, and it would do every Canadian credit to follow Sir Wilfrid’s example. There is an especial reason that Ottawa should receive more attention than any other city in the Dominion—for, of course, she is the Capital, hence more or less a model, a place set apart from, and a little above, her sister

cities; no pains should be spared to make her a polished gem set in the surrounding grandeur of the great Dominion.

But a city must breathe, it must have lungs. All the great over-populated centres recognize this now, when for many reasons, land in the closely settled districts is almost unpurchasable. Why, New York paid $1,800,000.00 for the site of Seward Park, recently—less than two acres of ground in a congested section. Note that and be warned, ye City Treasurers!

So it goes without saying that to provide against ♦expensive, luxuries like this, care must be taken in the youth of a city

to build it well, and it is shocking to realize how little provision has been made in the younger cities, for lungs and good circulation. Canadians who did not have the privilege of hearing Mr. Henry Vivian when he was on this side of the Atlantic, will be surprised to learn that some of the worst slum conditions are not in the older cities, where perhaps excuses might be made for them. But let me quote Mr. Vivian as nearly as memory will permit: “This fetid district” (showing on canvas an unspeakably squalid mass of houses from which a stream of filthy men. women and children oozed) “this district

gives you an idea of prevailing slum conditions, not in London, not in Paris, but in Toronto! And this” (showing another picture, worse than the first if possible) “is not Berlin, not St. Petersburg, but Winnipeg!”

Does it not seem incomprehensible that Winnipeg, our pride, our Chicago, growing with such prosperity and swiftness, I

say does it not seem incomprehensible that she should already in the heyday of her youth have a blot on her 'scutcheon?’ Ottawa, indeed, has slums too, but none of the conditions such as were brought to light in those pictures.

In every well built metropolis there should be reserved sections where air may drive out condensed gasoline, where blue

sky may take the place of blazing electric signs, and where old Sol, himself, may be seen—not merely his reflection in the plate glass windows of a twenty story office building! There should be a real grass plot undecorated by a KEEP OFF

notice, where Baby may stick her pudgy fingers in the dirt, and bring forth—who knows!—perhaps an angle worm: where Tom, Dick and Harry play mumbly-pe without fear of breaking the point off new jack knife, as when playing in the

sod which surrounds the base of a stunted tree!

Of course, the story of Ottawa’s regenerate days is known to all Canadians. The first strip of Ottawa’s driveway was built on King Edward Avenue just below Rideau Street. In comparison to the work done later it looks but a meagre attempt at beautification. From there, the work grew swiftly. Ottawa now has nine miles of road and park way: by the spring she will have thirteen, extending, with a very small break, from the Experimental Farm to the Rockliffe Rifle Ranges. Almost this whole length of Driveway extends along the bank of the Rideau Canal, or the Ottawa river.

From the illustrations may be gathered a general idea of the manner in which ‘the Driveway’ is laid out. Between the two roadways there are foot paths, studded here and there with rustic summer houses, and flower beds, while diminutive rustic bridges span the spaces between one grassy elevation and another. The work at Rockliffe varies slightly from the other section, in that it seems to aim at preserving the natural beauty of the woods, and there is little attempt at “laying out” a park— there is no need for it. Another photograph herewith reproduced shows the improvement made in what was a filthy dumping ground. This was know as Patterson’s Creek and looking to the left of the Canal, may be seen the way in which sunken gardens have taken the

place of a hideous, unhealthy spot. The little bridge and lodge are built entirely of cedar and add materially to the beauty of the place. Aritficial lakes have been made along the strip beginning at the Laurier Avenue bridge and these are bordered by dense ferns, as may be seen in illustration. The last piece of work undertaken by the Commission is the park on ‘Nepean Point.’ From this point the Driveway will continue along the water’s edge toward Rockliffe, and from there a wonderful view may be obtained of the river, the slope of the Parliament Hill, and the new Chateau Laurier.

Too much stress can not be laid upon the necessity for making our cities beautiful and healthful. We have not the cathedrals, the art galleries, the ancient castles, the Coloseums, and the Parthenons of older cities, but we have God-given resources and men of genius who can use them to the greatest advantage ; and while the building of St. Peter’s may appeal to some as an achievement well nigh unparalleled, it must be remembered that there are thousands of people on this continent who will never be the better for St. Peter’s—they will never see it; but the good done for them within their own cities will earn for the man or men who have the people’s well-being at heart, greater thanks and appreciation—greater results—than will the Shades of Michael, about whom perchance many of the people know nothing.

AVING asked and received much from life, what have we given in return? 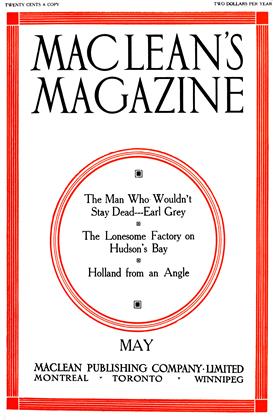