AWAY back in the rugged interior of Northern Ontario and Quebec, and down through the no less wild and hilly regions of eastern Quebec and New Brunswick, the bridge builders of the National Transcontinental are at work

erecting the two hundred and forty permanent steel structures that will carry the road through from Moncton to Winnipeg. It may seem matter-of-fact and inevitable that these twelve score solid and substantial bridges should be built, but

there is the old element of romance, even of magic, in the bridge-builders and their work, in the way in which the steel is strung aloft over rivers and valleys, where yesterday the faces of white men were unknown and where even to-day no civilized habitation is to be found, save only those of the construction gangs themselves.

A novice might imagine that the bridge engineer proceeds to the point where a bridge is required, takes up his residence there, sends for the materials he needs and erects his bridge. This may have been the method of construction in the old days but it is the way no longer. The bridge engineer nowadays does not need to leave his office in Ottawa. He is simply furnished with the necessary figures and data, secured by the engineers in the field, and with these at hand, he designs the requisite structure. A contract is then let to some bridge company, who construct the bridge in their manufacturing plant down in civilization, and send it in sections to the*far-c, ay valley, where it is erected by their own men, under the supervision of the resident engineer at that point. It is in reality nothing more or less than a magnified form of mail-order tailoring in steel and concrete. Certain measurements are taken for the fitting of

a valley with a bridge. These are sent to the head office and presently back comes the bridge made complete to order.

Had the Grand Trunk Pacific been built twenty years ago, it is hardly likely that the engineers would have called for eleven miles of bridges (not counting the Quebec Bridge) in a distance of 1,805 miles. They would certainly not have provided for permanent structures throughout. The old style of railroad construction was to build as cheaply as possible, using the maximum grade and curvature. When a bridge was necessary it was built of wood. The result of this system was a road difficult to operate and expensive to keep in repair. Such old roads, where the traffic warrants it, and the finances justified the expenditure, have expended large sums in betterment. For instance cutting down the grades and reducing curvature so that heavier and larger trains may be handled; renewing wooden bridges and trestles with steel or permanent embankments; and too renewing iron bridges with steel structures designed to carry the increased weight of engines and cars.

The engineers of the Transcontinental were, however, instructed to secure a line with, the medium possible grade and curvature. That they have been able to do this and to keep the grade down to 21 feet to the mile, was only possible because they were authorized to order bridges whenever they deemed it necessary. When for instance in their grade development they encountered a valley over two hundred feet high and a mile long, they did not have to sacrifice their low grade, or

avoid it by adopting a cheaper roundabout route, but went straight ahead and called for a steel viaduct to span it. Roughly speaking, steel trestles were ordered in every case where the height of the valley was over fifty feet. The G. T. P. will have an expensive road-bed it is true, but one which can be cheaply operated and maintained. _

The first phase of bridge building as carried on in the construction of the National Transcontinental, is the securing of measurements and other data by the engineer resident in the district. These enable the bridge engineer at Ottawa to design the structure. They consist of a profile of the crossing, drawn 20 feet to the inch, a contour pla n, elevations giving extreme flood level of the river, low water mark, alignment, “elevation of sub-grade” and “base of rail,” suggested length of span, direction and velocity of current at high and low water and indications of “scour.” Then, too, borings are required to give the character of the sub-soil. If the engineer has not the necessary machinery with him to do the boring or is unable conveniently to get it, he is sometimes placed at his wdt’s ends for means to get over the difficulty. One ingenious engineer once hit upon the happy expedient of harnessing dogs to a turn table in order to obtain the necessary power for his drill. In addition to borings, it is sometimes necessary to drive test piles from which the bridge engineer can de-

termine the extent to which each pile may be loaded and therefrom the number of piles required to support the superimposed load.

With all this information before him the bridge engineer and his staff set to work and in due course the plans for the required structure are ready. The engineer in the field is supplied with all the necessary plans to enable him to lay out the work, including piling plan and a separate working drawing for each pier and abutment, to which the contractor can work and order his material. Drawings are sent to the bridge companies on which they can tender. It should be explained that owing to the fact that all the bridges are standardized, tenders are submitted at so much per pound. Thus, for instance, the Cap Rouge viaduct, which contains 9,146,000 pounds of steel was contracted for at 3.94 per pound. After the tender is awarded the bridge company prepares the detailed shop drawings, which are examined and approved by the engineer and returned.

The erection of the bridges proceeds of course as circumstances permit. Not until steel is laid to the vicinity where a biidge is to be built is it possible to bring along the material and even then the foundations and piers which are always laid by the railroad contractors, must be in readiness for the bridge gang to set

to work on them. As a rule it takes from six to nine months to build the average bridge. Of the two hundred and forty bridges between Moncton and Winnipeg, probably three-fifths are now complete.

Bridge building is confined to no particular season and just as much work is done in the depths of winter as in the height of summer. It is in fact desirable that the erection of the steel bridges should be hurried along, so that in the time of spring floods, no damage will be done to temporary structures, thereby delaying not only the work on the bridges but on the other parts of the railroad as well. Many of the concrete foundations of the bridges spanning northern rivers have consequently to be put in through the ice, as shown in the illustration of the diver at work in the St. Maurice River shows.

If the bed of a river is solid, it is scoured off and the foundation laid on the boulders; if it is soft, wooden piles are driven until they “bring up.” In the case of the foundations for the Abitibi bridge, piles were driven to a depth of sixty feet before they met with sufficient resistance to hold. The cement is then poured into the foundation without a break, as any delay in the setting of the cement would cause a crack.

The foundation prepared next comes the bridge gang from the bridge factory,

with a derrick car and the sections of the bridge following on flat cars. If all the arrangements have been propeily made and if there are no delays in receiving material, it does not take them long to swing the various pieces of steel into place and rivet them. This is the spectacular part of bridge building and it is best described by referring to the illustrations, where bridges in various stages of erection are shown.

Excluding the Quebec bridge, which does not come within the jurisdiction of the National Transcontinental Railway Commissioners, the biggest bridge on the line is the Salmon River Viaduct in New Brunswick, which is 4,000 feet long and 200 feet high. The Cap Rouge viaduct near Quebec has a length of 3,335 feet and is 153 feet high, running right over a small village and rising high above the little church spire.

One extremely interesting phase of the work is the elaborate system of inspection which seems to overlook nothing and follows the building of the bridge from start to finish. The cement for the foundation work of which over four thousand car loads have already been used on the G. T. P. is subjected to rigid tests before it even goes *o the works. Each car is sampled at the mill and then sealed, pend-

ing orders for shipment. The samples are sent to headquarters at Ottawa, where at least five different tests are made, covering, time of setting, the presence of cracks in the set, adhesive power, specific gravity and fineness. If the cement passes the high standard set in all these tests, it is accepted.

The steel which is to be used in the construction of the bridge is examined and tested bo+h chemically and physically at the mills before it goes through to the bridge works, while at the factory itself there is an inspector employed to see that the bridge is being built according to the specifications. Finally, when the steel is being erected, another inspector watches everything and sees that each section is properly placed and that each rivet is firmly driven.

With all these inspectors the chief engineer keeps in constant touch, and to him they send weekly reports. The inspector on erection is required to furnish weeklv a photograph showing the progress that has been made on the bridge which he is inspecting. With these photographs before him, the bridge engineer is able to watch just what work has been done on any particular bridge in the course of a week and to have at hand an indisputable record of the progress of construction.

When the traveler of the not far distant future is whirled along the new transcontinental railway through the scenic beauties of northern Quebec and over the abundant rivers of New Ontario, his thoughts may pause for a moment, as his train rolls across some lofty viaduct, and consider the work of the bridge builders, who have made the construction

of such a low-grade railway possible. The level-headed iron workers riding high in the air on beams suspended from the derrick arm have 'done their share; the riveters theirs; the concrete men theirs. But perhaps the greatest is the man at Ottawa who sits designing them for valleys he has not seen. 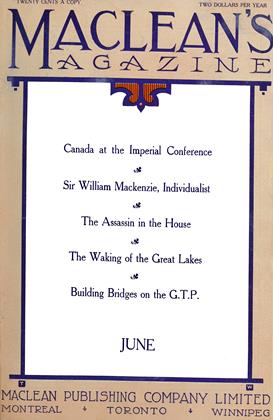