IF Hazelton Magill “worked” for the Armitage Bill (so said public opinion) the bill would go through. And early in February, about two weeks before the bill was to come up, word went round that Hazelton Magill was “working.” It was a bad moment for those interested. Jimmy Meredith, who had toiled “like a nailer” for the past six weeks, left the caucus of the faithful in deepest dejection.

“It’s not, you know,” he wailed it out to Fraser Johnson with whom he found himself walking up St. James street in the deepening dusk of the short winter afternoon, “it’s not as if he believed in it himself. We haven’t even that consolation. Any way you look at it the bill hasn’t a leg to stand on.”

Fraser Johnson shrugged his shoulders. “Just what would appeal to a man like Magill. I suppose it is the lawyer in him. I suppose it is the stimulus, the incentive —call it what you like—of taking a foregone conclusion case, and swinging it round to his will. In a way, one can understand it.”

“You remember the Demers-Prescott case?”

“Oh, rather! But that was debatable. And there was no principle involved there. He took the weaker, and as many thought, the wrong side, and we had to admit that he was justified, ethically, by results. But this corporation business is not on the same street at all. It’s up a back alley. And you’d think Magill would appreciate the difference.”

“Yes. Confound him! Unless—” “You know some way to reach him?” “I know—a person,” said Jimmy slowly. “But :t’s no good,” he added dismally Fraser Johnson looked at him quickly, and as quickly looked away again. He thought he remembered hearing that Jimmy’s cousin had once been engaged to the terrible Hazelton Magill, when he was only the brilliant Hazelton Magill. No one knew exactly why the affair was broken off, though the fact that Miss Meredith was known to disapprove of the view he took of the Demers-Prescott case naturally led to certain inferences.

“You know your own business best,” he said, when they had walked some time in silence. “But as things are, if I knew a way to move him—any way . . .”

That night he took a car out to his uncle’s in the Sandy Hill. Before he had been there long he let the latter draw from him the condition of corporation affairs as they stood, their condition if nothing intervened to divert Hazelton Magill from his evil way. As he was about to take his leave, he crossed over to the low chair where his cousin had sat all evening with her sewing-

“Well, Victoria. What’s the good word with you? Going to the Hewton-Lessing dinner Fridav?”

“Is that the way people speak of him— like that?”

“It is the way they will, if he puts the Armitage Bill through. Well, Au Revoir! and think it over about the Hewton-Lessing dinner, eh?”

On the stairs Jimmy scowled fiercely at himself.

The Hewton-Lessing dinner was a very brilliant affair. Those who were there, and, perhaps, even more, those who were not there, combined in making it very select. Hazelton Magill’s presence might have seemed to call for an explanation had he not, as someone aptly remarked, been Hazelton Magill. That made all the difference. You really could not label him. He was a law unto himself. Though if the Armitage Bill passed—well, they should see what they should see. In the meantime, he was received in their midst. He did not seem in the least aware of any condescension on their part in this. He had, in fact, the temerity to be late. And when he did finally appear, it was as one quite unconscious of any lapse in the amenities. Only when led to his dinner partner there was, for the fraction of a second, the least shade of hesitation before he presented his crooked arm to Victoria Meredith with a perfunctory “May I have the pleasure?”

“Too bad,” he observed, meeting her dark eyes with a smile, as they made their way out to the dining-room. “How did it happen? The last few years you have been fairly successful in evading me.”

“You prefer to meet as strangers? he retorted, observing her. “Well, we shouldn’t find that so very difficult. We are farther apart than mere strangers could ever be. We should be able to play up to that with éclat. Where shall we begin? Now, don’t tell me that it doesn’t matter, for everything these days is matter.”

For a little Victoria let him talk on. And at the proper time she laughed, and when he stopped she made some pertinent remark, at which he laughed, and said, “Have you noticed that, too?” or “You are of an analytical turn of mind

I perceive, Miss Meredith.” Just as though she were a stranger—she who had to check herself from finishing his sentences !

The dinner proceeded. And ever the flashes of their repartee came at longer and longr intervals, till silence fell between them.

At last, feeling his eyes upon her, Victoria looked up, her own dark with pain.

He said nothing. And after a little she went on rapidly: “You asked just now how it happened, our being put together like this. It didn’t ‘happen.’ I asked Flora. More than anything in the world, I wanted to see you, to talk to you, to tell you. Oh, Hazelton—that bill!” Her voice broke over it.

“What about the bill?” grimly.

“It was exactly like you to champion a forlorn hope. But you, Hazelton, you! What does Swinburne say? ‘Not for loss of heaven may we put away the rule of right.’ ”

“‘Care!’ But that doesn’t count. Nothing counts but—Don’t you see, you being you, you mustn’t do this thing? It would be—why I can’t tell you what it would be like. I haven’t the words. But when I think of it, at home, with streets, and people, and distance, and—and a misunderstanding between us, I feel—why, I feel—”

“And if I stuck out for it, as I did for that Demers-Prescott case?” he interrupted her.

“You were right, there,” she reminded him. “It was we who were wrong. I —I realized that—afterward.”

She straightened, and looked at him proudly.

“You couldn’t do a consciously wrong thing. It is not possible. I will not believe it of you.”

Again he interrupted her.

“You are right. It is not possible— now. For me the bill no longer exists. For me—”

He bent and whispered something in her ear. And Jimmy Meredith, chancing to look at them just then, grew radiant.

The Armitage Bill would not go through. 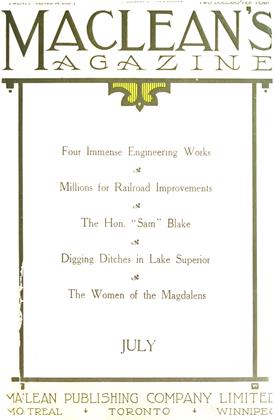