ATTACHED to houses in the first instance as a convenience in hot weather, the verandah has become an essential part of American house architecture and has added materially to the attractiveness of the home. It has, in fact, contributed a distinctive element to architecture on this side the Atlantic, rendering the cottages and villas of both the United States and Canada quite different from similar habitations in England and on the continent.

In referring to popular books on house building, it is surprising that so little attention is paid to this feature. Indeed, many treatises ignore it altogether and pay attention solelv to the interior arrangement of the dwelling. Where the

verandah plays so important a part in the lives of the people of this continent during the summer months, it is surely deserving of more detailed attention, if not of a complete volume to itself.

The real use of a verandah should be as an outdoor living room. It should be so contrived as to enable people to spend as much of their time in the fresh air as possible. Where it is built on the front of a house and that house is close to the street, as in so many cities, this purpose can hardly be achieved, because there is a lack of privacy that prevents people from enjoying it to the full. What should be aimed at is a verandah to one side or even at the back where the family can be assured of quietness and seclusion. Of course, there are some people who enjoy the sights and sounds of the street and have no objection to be the 'bjécts of impertinent scrutiny, but it wifi be found

that most families prefer a greater degree of privacy than that afforded by a front verandah, however well protected by screens and vines. In building a house,

therefore, while provision should be made for a verandah in front, if only for the sake of the added attractiveness it imparts to the house, there should also be

some thought bestowed on a more useful verandah to the rear, overlooking the garden and away from the street. This requirement may seem obvious enough and some readers may think it superfluous to introduce it, but it is so often found that even the simplest things are omitted in house-building that the writer has no hesitation in advising it.

According to definition, a verandah is an open gallery or portico, covered by a roof, supported by pillars and attached to the exterior of a building. It is often extended across one or more fronts of the building or entirely around it and is occasionally enlarged or otherwise so planned as to form an outside room, more or less protected by screens of vine or lattice. It is in a sense peculiar to the American continent where it has had its greatest development. Particularly in the southern states it has been constructed after so many fashions as to become quite an object of study and the styles are numerous and suggestive.

It will be found advisable to build the verandah, which is to be used more or less as a living room, in a recess of the house wall so that it may be protected from wind storms or rain as much as possible. Where it is exposed, a change in the weather may drive everyone into the house, a circumstance which might easily be obviated by a little foresight in arranging for its construction. It might well be built sufficiently strong to support heavy flower boxes, which ranged along its coping add a note of beauty to the scene. With the addition of vines, the owner of such a sheltered verandah has at his disposal a charming retreat, where he can enjoy a book or a smoke or a quiet chat.

The furniture of the verandah should be in keeping with its purpose and might well be permanently placed there. To carry chairs and tables in and out of the house is not only a laborious operation but is hard on the finer house furniture. Plain and substantial furniture, able to stand the weather, is what is needed. With Indian rugs, Japanese split bamboo screens, light but strong willow chairs and a hammock or two, the place will be well supplied. Some people have even gone so far as to turn the verandah into a dining room and enjoy their meals out there in the season. For such a purpose a folding table would be found more serviceable than an ordinary table, which takes up considerable room.

A verandah or porch at the main entrance is a feature that will add appreciably to the appearance of any house. There is a tendency to add these front verandahs to many of the older houses which were built before the days when verandahs were considered an essential and it is surprising to note the improve ment they make. They often change the whole appearance of a house, transforming it from an ugly and uninviting place into quite a pleasing residence. It might not come amiss for owners of houses without front verandahs to consider the advisability of adding one. in order to re-

move the bare appearance from the entrance and the whole front of the dwelling. If further decorated with hanging flower baskets and boxes it will be surprising the change for the better that will l»e wrought.

Imitating Grecian architecture a good many wealthy people have been attaching porticos to their houses. The portico is nothing but a porch or vestibule roofed and partly open on. at least, one side. Its roof is usually supported by columns and these extending up one. two or three storeys lend an appearance of great strength to the building. They are painted white and look very imposing. Of course such a feature must be in harmonv with the rest of the house, as nothing looks more ludicrous than a small house overbalanced by a huge white portico.

The porch itself is simply a covered place of entrance and exit attached to a building and projecting from its main mass. Usually one storey in height it may be extended to two or more storeys, the rooms above thus provided being termed porch rooms. The verandah of the modern American house where it serves to give entrance to the house by the principal doorway is a true porch.

The illustrations give some idea of tha verandahs and porches on a number of old colonial houses from which suggestions may be obtained for modern treatment. There is a charm about these old verandahs which have witnessed so much of the life of a departed generation and any person who contemplates building might with advantage imitate some of their features. For country residences or summer cottages they are especially attractive.

The item of cost is by no means a serious one, for after all. a serviceable verandah can be constructed for comparatively little. It does not require much material for one thing, and it does not take long to erect. Obviously it is cheaper to build at the same time that the house itself is being constructed, but on older buildings, which were erected before the days when verandahs were regarded as essential, it is possible to place these additions without any serious outlay. When one considers the pleasure and benefit to be derived from them, it is apparent that the cost is more

than offset by the resultant advantages. So. let those who live in old verandahless houses take counsel with an architect and see if they cannot improve and beautify their surroundings, and add to their health by placing verandahs on their resiliences.

Materials vary, but a uniformity between the house itself and the addition must be maintained. Either stone, brick or cement foundations are desirable, closed in with lattice work, over which vines can climb. Wooden pillars and roof are customary. The whole should be painted to harmonize with the house. 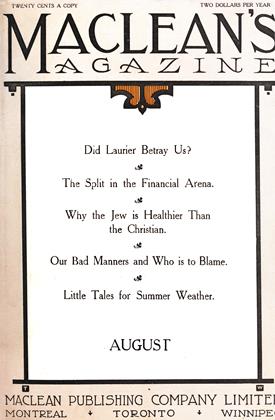