WHEN the inauguration was accomplished—the proceedings were made smooth by the presence of the Rough Riders—it is well known that a herd of those competent and loyal ex-warriors paid a visit to the big city. The newspaper reporters dug out of their trunks the old broad-brimmed hats and leather belts that they wear to North Beach fish fries, and mixed with the visitors. No damage was done beyond the employment of the wonderful plural “tenderfeet” in each of the scribe’s stories. The Westerners mildly contemplated the skyscrapers as high as the third story, yawned at Broadway, hunched down in the big chairs in hotel corridors, and altogether looked as bored and dejected as a member of Ye Ancient and Honorable artillery separated during a sham battle from his valet.

Out of this sightseeing delegation of good King Teddy’s Gentlemen of the Royal Bear-hounds dropped one Greenbrier Nye, of Pin Feather, Ariz.

The daily cyclone of Sixth Avenue’s rush hour swept him away from the company of his pardners true. The dust from a thousand rustling skirts filled his eyes. The mighty roar of trains rushing across the. sky deafened him. The lightning-flash of twice ten hundred beaming eyes confused his vision.

The storm was so sudden and tremendous that Greenbrier’s first impulse was to lie down and grab a root. And then he remembered that the disturbance was human, and not elemental; and he backed out of it with a grin into a doorway.

was not visible upon these gauchos of the North. Heaven sharpen their eyes ! The suit of black diagonal, wrinkled in impossible places; the bright blue fourin-hand, factory tied; the low, turneddown collar, pattern of the days of Seymour and Blair, white glazed as the letters on the window of the open-dayand-night-except-Sunday restaurants ; the outcurve at the knees from the saddle grip ; the peculiar spread of the halfclosed right thumb and fingers from the stiff hold upon the circling lasso; the deeply absorbed weather tan that the hottest sun of Cape May can never equal; the seldom-winking blue eyes that unconsciously divided the rushing crowds into fours, as though they were being counted out of a corral ; the segregated loneliness and solemnity of expression, as of an Emperor or of one whose horizons have not intruded upon him nearer than a day’s ride—these brands of the West were set upon Greenbrier Nye. Oh, yes; he wore a broad-brimmed hat, gentle reader—just like those the Madison Square Post Of-, fice mail-carriers wear when they go up to Bronx Park on Sunday afternoons.

Suddenly Greenbrier Nye jumped into the drifting herd of metropolitan cattle, seized upon a man, dragged him out of the stream and gave him a buffet upon his collarbone that sent him reeling against the wall.

The victim recovered his hat, with the angry look of a New Yorker who has suffered an outrage and intends to write to the Trib. about it. But he looked at his assailant, and knew that the blow was in consideration of love and affection after the manner of the West, which greets its friends with contumely

and uproar and pounding fists, and receives its enemies in decorum and order, such as the judicious placing of the welcoming bullet demands.

“God in the mountains!” cried Greenbrier, holding fast to the foreleg of his cull. “Can this be Longhorn Merritt?”

The other man was—oh, look on Broadway any day for the pattern— business man—latest rolled-brim derby —good barber, business, digestion and tailor.

“Greenbrier Nye!” he exclaimed, grasping the hand that had smitten him. “My dear fellow! So glad to see you! How did you come to—oh, to be sure—the inaugural ceremonies—I remember you joined the Rough Riders. You must come and have luncheon with me, of course.”

Greenbrier pinned him sadly but firmly to the wall with a hand the size, shape and color of a McClellan saddle.

“Longy,” he said, in a melancholy voice that disturbed traffic, “what have they been doing to you?” You act just like a citizen. They done made you into a inmate of the city directory. You never made no such Johnny Branch execration of yourself as that out on the Gila. ‘Come and have lunching with me-’ You never defined grub by any such terms of reproach in them days.”

“I’ve been living in New York seven years,” said Merritt. “It’s been eight since we punched cows together in Old Man Garcia’s outfit.. Well, let’s go to a cafe, anyhow. It sounds good to hear it called ‘grub’ again.”

They picked their way through the crowd to a hotel, and drifted, as by a natural law, to the bar.

“Oh, Lord,” cried Greenbrier; “and yet me and you once saw the same pink Gila monsters crawling up the walls of the same hotel in Canon Diablo ! A dry —but let that pass. Whiskey straight —and they’re on you.”

the cafe. Merritt dexterously diverted his friend’s choice, that hovered over ham and eggs, to a puree of celery, a salmon cutlet, a partridge pie and a desirable salad.

“On the day,” said Greenbrier, grieved and thunderous, “when I can’t hold but one drink before eating when I meet a friend I ain’t seen in eight years at a 2 by 4 table in a thirty-cent town at 1 o’clock on the third day of the week, I want nine bronchos to kick me forty times over a 640-acre section of land. Get them statistics?”

Merritt slipped the wine card under his glass.

“All right. I suppose you think I’m spoiled by the city. I’m as good a Westerner as you are, Greenbrier; but, somehow, I can’t make up my mind to go back out there.

“I’ll tell you what you are, Merritt,” said Greenbrier, laying one elbow in his salad and the other in his butter. “You are a concentrated, effete, unconditional, short-sleeved, gotch-eared Miss Sally Walker. God made you perpendicular and suitable to ride straddle and use cuss words in the original. Wherefore you have suffered his handiwork to elapse by removing yourself to New York and putting on little shoes tied with strings, and making faces when you talk. I’ve seen you rope and tie a steer in 42VoIf you was to see one now you’d write to the Police Commissioner about it. And these flapdoodle drinks that you inoculate your system with—these little essences of cowslip with acorns in ’em, and paregoric flip —they ain’t anyways in assent with the cordiality of manhood. I hate to see you this way.”

“Well, Greenbrier,” said Merritt, with apology in his tone, “in a way you

are right. Sometimes I do feel like I was being raised on the bottle. But, I tell you, New York is comfortable— comfortable. There’s something about it—the sights and the crowds, and the way it changes every day, and the very air of it that seems to tie a one-milelong stake rope around a man’s neck, with the other end fastened somewhere about Thirty-fourth Street. I don’t know what it is.”

“God knows,” said Greenbrier sadly, “and I know. The East has gobbled you up. You was venison, and now you’re veal. You put me in mind of a japónica in a window. You’ve been signed, sealed and diskivered. Requiescat in hoc signo. You make me thirsty.”

“A green chartreuse here,” said Merritt to the waiter.

“Whiskey straight,” sighed Greenbrier, “and they’re on you, you renegade of the round-ups.”

“Guilty, with an application for mercy,” said Merritt. “You don’t know how it is, Greenbrier. It’s so comfortable here that--”

“Please loan me your smelling salts,” pleaded Greenbrier. “If I hadn’t seen you once bluff three bluffers from Mazatzal City with an empty gun in Phoenix -”

“Cigars!” he called harshly to the waiter, to hide his emotion.

“A pack of Turkish cigarettes for mine,” said Merritt.

“They’re on you,” chanted Greenbrier, struggling to conceal his contempt.

At seven they dined in the Whereto-Dine-Well column.

That evening a galaxy had assembled there. Bright shone the lights o’er fair women and hr—let it go, anyhow— brave men. The orchestra played charmingly.

Merritt put forth exertions on the dinner. Greenbrier was his old friend, and he liked him. He persuaded him to drink a cocktail.

“I take the horehound tea,” said

Greenbrier, “for old times’ sake. But I’d prefer whiskey straight. They’re on you.”

“Right!” said Merritt. “Now run your eye down that bill of fare and see if it seems to hitch on any items.”

“Lay me on my lava bed!” said Greenbrier, with bulging éyes. “All these specimens of nutriment in the grub w'agon ! What’s this? Horse with the heaves? I pass. But look along! Here’s truck for twenty round-ups all spelled out in different sections. Wait till I see.”

The viands ordered, Merritt turned to (be wine list.

“This Medoc isn’t bad,” he suggested.

“You’re the doc,” said Greenbrier. “I’d rather have whiskey straight. Tt’s on you.”

“How was the range when you left the Gila?” asked Merritt.

“Fine,” said Greenbrier. “You see that lady in the red speckled silk at that table? Well, she could warm over her beans at my campfire. Yes, the range was good. She looks as nice as a white mustang I see once on Black River.”

When the coffee came, Greenbrier put one foot on the seat of the chair next to him.

“You said it was a comfortable town, Longy,” he said, meditatively. “Yes, it’s a comfortable town. It’s different from the plains in a blue norther. What did you call that mess in the crock with the handle, Longy? Oh, yes, squabs in a cash roll. They’re worth the roll. That white mustang had just such a way of turning his head and shaking his mane — look at her, Longy. If I thought I could sell out my ranch at a fair price, I believe I’d-

“Gyar—song!” he suddenly cried, in a voice that paralyzed every knife and fork in the restaurant.

The waiter dived toward the table.

Merritt looked at him and smiled significantly.

“They’re on me,” said Greenbrier, blowing a puff of smoke to the ceiling. 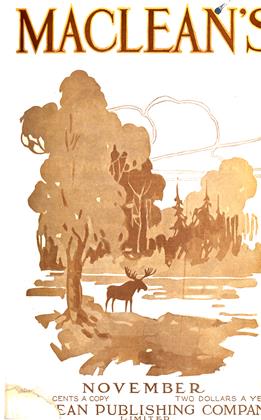