OF Dayton, his associates has this to say, that never once had his nimble fingers made a mistake in handlingmoney. That was because they did not know Dayton as Dayton knew himself. Those nimble fingers of the teller had made one mistake, one big mistake; Dayton knew it and one other person knew it. Others were bound to know it.

He sighed as he brushed the stack of bills into the drawer. It was 'his breathing-spell between the tides. The noon whistles had blown; the whole office was drowsy and still. Dayton glanced about him. He was alone in the bank. Even Humpty, the lame old ledger-keeper, had slipped out to lunch. His eyes roamed about his steel cage, finally resting on the brown automatic revolver lying close on his right hand. He reached over and drew it towards him, then pushed it away with a shudder.

Theteller drew a crumpled letter from his pocket and spread it out before him on the counter. He had read the letter once before that morning. There are times when a man should make sure:—

“When your letter came I took it out in the old arbor where we two spent so many happy moments. I kissed it before I read it; then I followed its lines and something died in me. I had always thought you brave arid honest. Your confession brands you a thief and a coward. You stole two thousand dollars. You gambled it away in a game of which you knew nothing. Those who won the money from you are men compared with you. They at least possess sufficient courage to rob openly. If you thought I would consider your babyish confession manly, you were wrong. I can’t see it that way. Of course all is over between us. I enclose check for the amount of your shortage. I know it will be acceptable to you because it will save you from jail. The only

stipulation I make is that you go away where I shall never see your face again.

Dayton read the letter through with drawn face. He deliberately detached the check from it and enclosed the same in a plain envelope which he sealed, addressed and stamped, and dropped into a letter box. A faint blush had wiped the dead grey ness from his face. He leaned wearily against the cage and once again his eyes roamed to the revolver. After all there was only the one way out, a cowardly way, to be sure.

He lifted his head quickly as a step sounded in the hall. It passed, and again Dayton reached for the revolver. Then a voice spoke in a crisp, cold tone of command:

“Throw out those bank notes.”

Dayton lifted his head slowly and the red mist rolled away from his brain. A man with a black mask across his eyes was looking in at him, and in the brown lean face below the mask the teller marked coolness and determination. ,

“Throw out the money and be quick,” demanded the man; “no foolin’ son. I’ve got you covered.”

It flashed upon Dayton that here stood his deliverer. No one except himself knew the amount of cash on hand. Nobody need ever know—

He swayed upright and with trembling hand opened the cash drawer.

But SHE knew! He would take the other way out. It, too, was a deliverance. Pie slammed the door shut again and stood erect with a laugh.

reached for the automatic.

Whathappened then is not very distinctio Dayton. He remembered facing the red-vellow spurts of flame, his left arm falling limp by his side, then of standingalone in a fog of blue smoke with a salty taste in his mouth and a smoking revolver

in his hand. He saw people rush into the building and some of them bent above a huddled form near the door. He remembered unlocking his cage door to go out and see what was the matter—then came forgetfulness.

When Dayton opened his eyes again he was lying between cool sheets. Through an open window came the breath of white

lilacs. The flowers made him think of an old arbor and a girl, and these brought other vague thoughts. He wanted to turn his face to the wall but the attempt made him groan with pain. His left arm was bound and bandaged tightly in splints. He wondered where he was ; how he came to be there ; and then, with the sunset

breeze, alive with the scent of lilacs, beating his face—memory came back to him,

After all, he had not accepted deliverance. He felt a soft cool hand on his forehead, and Dayton opened his eyes.

“Annie,” he whispered, wonderingly, “you?”

He noticed that her face was pale and that her lips trembled.

“I was close at hand when it happend, Jack,” she spoke. “I was coming to you to ask your forgiveness for writing that horrid letter. I made them bring you here.”

“Here?” His tired eyes opened wide— “Here?” he repeated; “here to my home?” He turned his face toward the breeze

and the twilight and the breath of lilacs. The tears were forcing themselves from between his eyelids. He did not want her to know—

She walked around the bed and knelt beside him.

“No, no,” she cried quickly—“Jack, you are a hero. Everybody is talking about how you effected the capture of the notorious Darkin.”

“Yes, and you have won the reward of $2,000 offered for his capture, Jack,” she cried hysterically. “Here, shall I read you the account?—the paper is full of it.”

“Then I didn’t kill him?

“No, no, he is badly wounded, but will recover—Jack—”

“Will you forgive me dear—forgive me for calling you that? I am very sorry—I am—”

Pier brown head sank low and nestled against his breast.

“You are shivering,” she exclaimed, fearfully.

After a time she spoke:

“I just came from the bank, Jack. Mr. Winters, the manager, asked me to tell you that he would be over to see you to-night. He gave me some good news for you. You

are to be made manager of the H-

branch of the bank.”

Dayton laughed oddly. “He will change his mind,” he said quickly.

“I left the money you put in your pock -et—when—when Darkin grabbed for it, Jack,” said the girl impetuously,—“the twenty hundred-dollar bills—you remember? I thought you would want them—Mr. Winter to know—”

“The money?” said Dayton, diazedly— “there was no money in my pocket.—Darkin did not-•”

He ceased speaking, and with a strongarm raised the girl’s eyes on a level with his own.

She nodded grimly, and then she threw her arms about his neck and with a happy little laugh pressed his hot face against her deliciously cool one.

“I’m only loaning it, Jack,” she whispered. “When you get the reward you— you can pay—”

She whispered the rest, of the sentence very softly—

The Best is Yet to Be

For all men, small as well as great, even for those who have succeeded, and conquered apparently all honors, it is true that the best is yet to be. Heroic Paul, earth’s most intrepid and earth’s sublim est spirit, standing forth in old age, with a thousand victories behind him, knew that he had not yet attained. No matter what your success, I appeal from the seed to the comingsheaf, from the acorn to the coming oak, from this little spring to the future river, from your ignorance to wisdom, from your fragmentary tool or law or custom to perfect virtue, from the broken arc to the full circle, from the white cloud to the stars that are above the clouds. Because life is in a series of ascending climaxes, and because it waxes ever richer and richer, for every man, whether young or old, it is better farther on, and the best is yet to be. Heaven lies yonder.—Rev. Neivell Dwight Hillis. 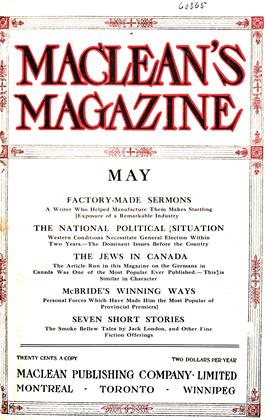