OLD Horace Hodskins leaned over the picket fence of old Maurice Williams’ garden and watched his friend delve into the black spicy garden-earth with a rusty trowel.

He threw a root from the earth and tossed it on a patch of sunshine to dry.

“Feels wa’m and hazy like,” he remarked, “a big rain about due, I’m thinkin’. What you killin’ yourself at these days, Horse?”

“Why nothin’ much ’cept *chorin’ round a bit,” grinned Hodskins. “The hoys they went over to the other hundred acres yest’day and ma she went along to do the cookin’ for ’em. You busy I see?”

“Well I be, an’ agin I be n’t,” said Maurice, rising painfully and smoothing his cramped legs with his earthy hands. My boys they have gone up country too, to look after fencin’ the Dobbin pasture. Only ma an’ me here; seems lonesome.”

“Yes!” Maurice limped over to the fence, his old felt hat under his arm, and took the hag of home-cured “chewin” from his cronie’s extended hand. His bald head gleamed in the sunlight and the fringe of white whiskers beneath his chin shivered like an aspen thicket in a wind, as his jaws worked on the generous wad of fine-cut.

“Many white grubs er wire-worms?” asked Horace, screwing up his seamed face and peering down at the delved earth. “Beats all how thick them pests air gettin’ nowadays, Maurice.”

“Some; hut not a great many,” answered his neighbor, scraping his earthy hands on a sharp-edged picket, “but it

do heat all how many fish-worms I’vedug up here this mornin’.”

“Guess I will. I’ve seen the’ time when I could leap a fence like this ’un mighty easy, but I guess I’d better try th’ gate. Rheumatiz sorter keeps my ole legs from gettin’ pranky every time my fancy wants t’ play a trick on ’em an’ says jump.”

“Same here,” nodded Maurice, “gosh what a pair of old fools you and me be, Horse. Gee flicker but there’s no tellin’ what pranks us two ’ud be up to if we didn’t have somethin’ like stiff jints to hoi’ us back.”

“Them—an’ people,” agreed Horace, “mostly people though, Marse. You know an’ I know, that there be lots o’ things we’d do if it wasn’t fer our hoys’ thinkin’ us silly. Dang it all, sometimes when I’m nosin’ about th’ stables I just long to unhitch that young brindle steer o’ ourn and run him round th’ straw stack, rope in one hand and cornstalk in t’other.”

“Ain’t it queer, though?” chuckled Maurice. “I’m exactly that way myself. We’ve got a hay filly that I jest naturally long to break in hare-back. Every time I see that colt I want t’ jump on its hack an’ go helwhooping’. I used to break ’em, you know, Horse?” “I reckon they don’t make riders like you nowadays,” affirmed the other old man, “no they don’t make ’em.”

“Some day I’m goin’ to ride that filly,” said Maurice. “I may have some leetle trouble gettin’ astride, hut onct I’m thar. it’ll find me some hard to

shake off. I’ll find out if it’s got some jumps in it, begosh.”

He took the rusty trowel and shoved it into the black earth. “Bet I get four fish-worms first shovel-ful,” he grinned.

“Bet you don’t,” returned his crony, getting down on his knees beside him. “Hold on, now, no cheatin’,” as Maurice attempted to make a double dig with the sharp trowel. “Let’s see, one—two —three, by gum, you’re beat ! There be only two worms in that shovel-full.” “You ain’t smashed that lump in your hand yet,” said Maurice meaningly. “Crunch it up.”

“There ain’t nuthin’ in it,” declared Horace, “it’s too hard. There you be, what did I tell you?”

“All right call ’em worms then. Try ag’in. Bet you don’t get five this time.” The morning sunlight strained down through the leafy fruit trees and painted the two old men with dappled glowing warmth. It touched their glad, wrinkled faces and licked their brown knotted hands. Just above them a rainbow-hued humming bird balanced his wee body on whizzing wings to sip the nectar from a late blossom.

Maurice arose stiffly, glanced craftily sideways at his neighbor busily extracting a worm of remarkable proportions from a lump of earth, then bending above a bed of fluffy garden-fern picked up a battered salmon-can.

“Gosh,” he grinned, “don’t it beat all now? Here we be diggin’ worms jest like two kids trying to steal off fishin’, an’ I jest cock an eye round an’ spy an empty can to put ’em in.”

“Well now, I was jest awishin’ we had a can fer these worms,” said Horace. “Seems too bad t’ waste good fish-worms,

don’t it now? Maybe,” he chuckled, “if you look dost about you you’ll find a couple o’ fish-poles, too, Marse.”

Horace, busy dropping the wriggling worms in the battered can, glanced up to see his pal pulling two weather-battered birch-poles from beneath a pile of straw.

“Jest look a leetle closer an’ maybe you’ll discover a ball o’ twine an’ some hooks somewhere among them bushes,” he said drily.

“You be n’t insinuatin’ that I deliberately hid these poles here, or that there can, be you, Horse?”

“Now that would be funny,” laughed Maurice. “By gosh but wouldn’t it be funny. Think of us two old codgers, so chuck up full o’ rheumatiz and jinttwinges that we can’t even do chores proper, talkin’ about fishin’. Ain’t you ashamed o’ yourself, Horse?”

“This summer sunshine sorter goes t’ yer yead,” sighed Horace. “I ain’t savin’ as we’re goin’ fishin, be I? I’m jest savin’ that anybody seein’ you with them poles an me scoopin’ up worms like a ten year old, might THINK we was, that’s all.”

He arose with some difficulty and placed the can-full of worms on the ledge of the picket fence.

“Reckon I’d best cut a tuft er two o’ that long grass to put over these fellers,” he said. “Bet a dollar I’ve left my jackknife on th’ table where I cut th’ shavins fer this mornin’s fire.”

He felt in his pockets, his wrinkled face screwed up, his tongue protruding uncertainly. He drew forth a blackened clay pipe, a plug of Canada’s twist, and several other articles, but search as he would he could not find the knife.

“Where?” asked Horace, “where do you see somethin’ looks like an apple?”

“Why right here in your coat pocket,” Maurice reached down an earth-

stained hand and drew forth a-ball

“Ho, ho,” he nodded, “don’t suppose you knowed this twine was there now, did you Horse?”

“Why now, I’d forgot all about that twine,” said Horace, sheepishly. “I was usin’ it last night to tie up th’ grape-vines over home.”

“And these here fish-hooks stickin’ in it, now, I s’pose you was usin’ them last night t’ tie up th’ vines too—you ol’ fibbergaster you !”

Horace grinned and shuffled his feet uneasily. Then he looked up and the two old cronys burst out laughing. After while Maurice, wiping his streaming eyes on his sleeve, said:

“My boys won’t be back till to-morrow, an’ their ma she sorter pines to drive over th’ village this mornin’. Maybe we’d better go an’ hitch up ol’ moll an’ let her get started.”

“I reckon we’d best,” answered Horace, picking up the can of worms and putting it in his coat pocket.

Half an hour later the old men stood at the gate and watched a portly woman with white hair and kindly face drive the old bay mare down the lane.

“I won’t likely be back till sundown, Moriss,” she called over her shoulder. “You an’ Iloriss ’ll find pies and meat

in th’ pantry. Don’t you let th’ chickens get into th’ kitchen.”

When the bay mare and phaeton had vanished in a cloud of dust far down the road, the cronies turned and laughed.

“You orter be ashamed o’ yourself,” said Llorace. “Think of a old cripple like you wantin’ to go fishin’ jest because th’ worms are plenty an’ th’ summer breeze is callin’.”

“An’ how about you?” snorted Maurice. “Haven’t you been hidin’ fishin’ tackle away in your pockets ever since spring sot in, you ol’ reprobate? Come on,” he grinned, “let’s go inside an’ do up our lunch. I reckon,” he said, turning to look into the dancing eyes of his neighbor, “I reckon we’d better hike back to th’ ol’ spot among th’ red willows, eh?”

“The place we used to catch th’ big ’uns? Sure. There’s lots o’ deep water there an’ heaps an’ heaps o’ sunshine. Sunshine’s good for rheumatiz,” he added with a chuckle.

His old pal laid a hand on his arm. “Look ’e ’here, Horse,” he said solemnly, “there ain’t no sech thing as rheumatiz, ner stiff joints ner twinges ner anythin’ o’ that sort wrong with you er me to-day, see? Tf you don’t feel equal to jumpin’ back twenty year er so along life’s rutty1 path an’ leavin’ old age behind fer a spell, you ain’t cornin’ fishin’ with me, that’s all.”

“Marse,” said his friend just as solemnlv, “no words in the English language kin describe my feelin’s o’ skittishness and devil-may-careness this day of our Lord. Do up th’ lunch young man an’ Hl het a twist o’ tabaccy I k’n beat you runnin’ t’ th’ meddar bars.” 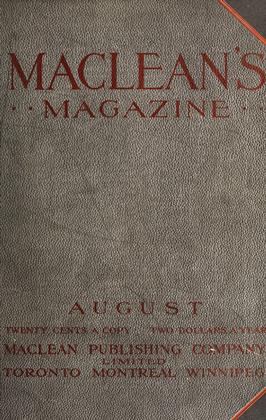