The One-Price System Elbert Hubbard May 1 1913

THE greatest change in modern business came with the One-Price System. This has all been brought about since the Civil War.

The old idea was for the seller to get as much as he possibly could for everything he sold. Short weight, short count and inferiority in quality were considered quite right and proper. When you bought a dressed turkey from a farmer, if you did not discover the stone inside the turkey when you weighed it and paid for it, there was no redress.

The laugh was on you. And, moreover, a legal maxim-— caveat emptor—“let the buyer beware,” made cheating legally safe.

Dealers in clothing guaranteed neither fit nor quality, and everything you paid for, once wrapped up and in your hands, was yours beyond recall—“Let the buyer beware ”

A few hundred years ago business was transacted mostly through fairs, ships, and by peddlers. Your merchant of that time was a peripatetic rogue who reduced prevarication to a system.

The booth gradually evolved into a store, with the methods of the irresponsible keeper intact. The merchants cheated their neighbors and chuckled in glee, until their neighbors cheated them, which, of course, they eventually did. Then they cursed each other, began again and did it all over.

John Quincy Adams tells of a certain deacon who kept a store near Boston, who always added in the year 1775 at the top of* a column, as seventeen dollars and seventy-five cents.

The amount of misery, grief, disappointment, shame, distress, woe, suspicion and hate, caused by a system which wrapped one thing when the buyer expected another, and took advantage of his innocence and ignorance as to quality and value, cannot be computed in figures.

Suffice it to say that duplicity in trade has had to go. The self-preservation of the race demanded honesty, square dealing, one price to all.

The change only came after a struggle and we are not always quite sure of the one price yet. But we have gotten thus far that the man who cheats in trade is taboo. Honesty as a business asset is fully recognized. If you would succeed in business you can’t afford to sell a man something he does not want ; neither can you afford to disappoint him in quality any more than in count.

Other things being equal, the merchant who has the most friends will make the most money. Our enemies will not deal with us.

To make a sale and acquire an enemy is poor policy. To a peddler or a man who ran a booth at a bazaar or fair it was “get

your money now or never.” Buyer and seller were at war. One transaction and they never met again. The air was full of hate and suspicion, and the savage propensity of physical destruction was refined to a point where hypocrisy and untruth took the place of violence. The buyer was as bad as the seller—if he could buy below cost he boasted of it. To catch a merchant who had to have money was glorious—we smote him hip and thigh. Later we discovered that, being strangers, he took us in.

The One Price System has come as a necessity, since it reduces the friction of life and protects the child or simple person in the selection of things needed, just the same as if the buyer were an expert in values and a person who could strike back if imposed upon. Safety, peace and decency demanded the One Price System. When we reach the point where we see that all men are brothers, we have absolute honesty and One Price.

And so behold! we find the Government making favoritism in trade a crime and enforcing the One Price System by law. And just remember this, law is the crystallization of public opinion, and no law that is not backed up by the will of the people can be enforced.

As we grow better we have better laws. In Kansas City the other day three men were fined forty thousand dollars each for cutting prices.

They were railroad men and railroad men have only one thing to sell, and that is transportation. To cut the price on it and sell to some at a less figure than to others is now considered not only immoral, but actually criminal. The world moves.

And this change in the methods of business and in our mental, attitude toward trade has grown out of a dimly perceived but deeply felt belief in the Brotherhood of Man, or the Solidarity of the Race.

Therefore he who ministers to the happiness and well-being of the life of another is a priest and is doing God’s work.

The necessary is the sacred. There are no menial tasks. “He that is the greatest among you shall be your servant.” The physical reacts on the spiritual and the spiritual on the physical, and rightly understood, are one and the same thing.

We have ceased to separate the secular from the sacred. That is sacred. That is sacred which serves. Once a business man was a person who not only thrived by taking advantage of the necessities of the people, but who banked on their ignorance of values. But all wise men now know that the way to help yourself is to help humanity.

We benefit ourselves only as we benefit others. And the recognition of these truths is what has to-day placed the Business Man in the fore-front of the learned professions. He ministers to the necessities of humanity. 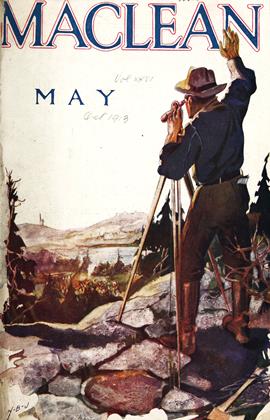