PARLIAMENT had just prorogued. The ceremonial was concluded. Royalty had driv-

en away. Scarlet-coated soldiers and brass-buttoned bandsmen had “fallen out” and mingled again, as ordinary citizens, with the curiosity-satisfied onlooking proletariat. The show was over. Yonder in the deserted Commons Chamber scores of messengers and pages were already busy packing up. One after another the desks of departing members were being overhauled — cleaned out. Nondescript piles of papers and packages were scattered about with inartistic abandon—miscellaneous debris in dreadful disarray. School was out, and nobody cared now for appearances. A big, solid, square-shouldered man in his shirt-sleeves was among the busiest of the house-cleaners. He devoted his efforts to the contents of one desk. There was no disorder there. The blue-books, all thumbed and marked and checked, were first deposited in a neat parcel, and then carefully corded together. The plethora of parliamentary papers were industriously sorted and indexed and fyled. It was a hot day, and, once in a while, the worker paused to wipe the perspiration

from his forehead. From one of the entrances came the sound of feminine voices. A coterie of radiantly - attired ladies, evidently from attendance at the recent elaborate function in the Senate Chamber and, mystified by the labyrinth of corridors into which they had strayed, made a somewhat flustered appearance. The big, solid, square - shouldered man in shirtsleeves was just depositing a massive corded consignment of blue books on the floor. To him the leading lady appealed. “Are you,” she asked, “one of the servants in this building?”

The big, solid, square-shouldered man in shirt-sleeves bowed. “I am, madame.” Then he stolidly conducted the strayed party to the exit sought. As he turned back the distinguished figure of Sir Wilfrid Laurier came into view. With hand extended the former Prime Minister stayed his progress, exchanged a few friendly words and patted him affectionately on the back. “Who is that man?” queried one of the

now surprised ladies of a nearby attend“The man Sir Wilfrid is talking to? Why, that’s Mr. Verville, the member for Maisonneuve,” was the response. “Oh,” gasped the fair visitor, adding in an aggrieved tone, “And he told me he was a servant!” But he told the truth. Alphonse Verville is a democrat who believes in democracy. He still serves. Being a member of Par-

a unique position in Canada’s Parliament. He serves more of his fellow Canadians than does any other member on either side of the present House. The constituency which elects him has a larger population than any other of the two hundred odd ridings represented. He polls more votes than any other parliamentarian. But, beyond this fact, significant in itself, he is Labor’s one and only representative. His constituency is not limited even to the cosmopolitan and populous confines of Maisonneuve. It really extends from ocean to ocean. To-day he is fighting the legislative battle of the British Columbia miner; to-morrow he is waging war for better working conditions in the big industries of Nova Scotia. Labor, when it sent Verville to plead its cause among the nation’s legislators, supplied a real asset to the national life. There are plenty of men, Heaven knows, inside and outside of Parliament, who make it their profitable business to look after the Interests—with a capital I, always. But apostles of the people—the common, everyday, ordinary folk—are still scarce enough in the halls of the mighty. Ver-

ville has done some little leavening, but the whole lump can stand more yet. Most men come to Parliament as politicians or theorists. They come looking for preferment, or seeking a career. Verville came to do a job. He wants to put something human into the dry bones of legislation. He wants to make things better for the crowd, the crowd outside. He hasn’t overmuch patience with the elect. He isn't concerned with the liquidation of partisan liability. Nor is he worried with the niceties of precedents, of formulas, of “non-inter-

vention,” of taking-the-matter-under-consideration, and the other acrobatic arts of parliamentary trapeze-work. He doesn’t know—and doesn’t care—much about these things. But he does'know life at first hand, and he does care about the conditions which surround it. ALWAYS A WORKER. Verville has been a worker all his days. He has trained for Parliament, not in the

political club or caucus, but in the big industrial workshop of a young nation. He hasn’t studied the classics to any extent, but he has thoroughly studied himself and his fellow men. He is singularly open to impressions from without. Few men oscillate so rapidly from side to side when their own opinion is yet unformed. But there is with all this an intense and abiding adherence to what he deems to be essential and a staunch tenacity of grasp when an idea has once become fixed with him. Like a big ship swinging at her anchor, he sways about with the ebb and flow of the tide ; but he does not drift from his moorings. And he is not the man to flinch from an unpleasant or perilous situation once he hears the call of conviction. A PLUMBER’S APPRENTICE.

Nearly fifty years ago Alphonse Verville was born in the modest village of Cote St. Paul, Quebec. H e grew up, as most boys do. Money was not superabundant in the Verville home, so the boy was sent to work. In his early ’teens he was apprenticed to the plumbing trade. He worked during the day, and studied during the night. He learned his trade and became a master plumber. He absorbed history and economics and set himself to a practical application of their teaching to everyday conditions.

Time went on— and so did Verville.

For twenty odd years he worked at his trade, and met with such success as enabled him to set up business for himself in Montreal. But Verville is an example of the heterodox theory that a man can do two things well at the same time. He was not giving all his time to his trade. He had grasped the idea that life could not be measured in terms of business alone. He took an interest in public affairs. Most of all he took an interest in the affairs of the men about him. He became active in Labor circles. For a

time he was business agent for one

of the biggest unions in Montreal. His interest in the work and his unusual ability were recognized by other Labor men. For six or seven terms he was president of the Dominion Trades and Labor Congress, and probably would have been president yet if he had not seen fit to retire after the congress was held in his own province.

It was in 1903 that his associates began to realize that Verville would be a good man for Labor to have in politics, and when the Quebec provincial elections of

1904 came round he entered the lists in Hochelaga county. It was Labor’s first venture in politics in that province and when the ballots were counted it was found that Verville was still on the outside looking in. His opponent, later the Hon. J. Decarie, was duly elected.

That was only the beginning. Verville hasn’t acquired the habit of letting defeat daunt him. In 1906 the death of Hon. Raymond Prefontaine created a Federal vacancy in the Maisonneuve division of Montreal. Mr. Grothe ran as the Liberal nominee, and back of him had the full power of the Laurier Government. Verville had back of him the Labor organizations. Grothe didn’t get to Parliament. Verville did—and with over 1,000 majority, at that. He came back in 1908 with 4,000, and in 1911 with 3,000. And people who ought to know say he will keep com-

ing back just as long as he wants to.

Verville in Parliament has generally given an independent support to Liberalism. He has strong views on the cost of living, and other intimate economic subjects. Incidentally, by instinct and upbringing, he is a radical. But he is a Labor representative in the last analysis. If the Liberals tramp on labor’s toes, Verville is liable to do some tramping himself—and he has a substantial foot!

This man Verville is, however, essentially a peace-loving man. He looks it. His quiet, full, round face, albeit marked by many deep-cut lines, is benign and pleasant. His greyish-white hair fits in with his mild manner. But parliamentarians on both sides have a wholesome respect for Verville. There is always something

to and in his short speeches. Despite his mild-mannered, easy-going appearance, he has splendid courage and, when placidity ceases to be a virtue, there comes stern determination to stand by his conviction no matter what the opposition or the cost.

Labor in the Dominion Parliament differs much from labor in the Ontario Legislature. There is equal earnestness, equal intensity, equal determination to serve with an eye single to the cause espoused. But little Allan Studholme lashes himself into hysterical fury as he pours forth counsel and anathema by the hour. Sturdy Verville speaks by the minute, but there is something doing every sixty seconds. Every sentence is winged toward the bullseye. Studholme, Anglo-Saxon though he be, rhapsodizes with Latin fervor and declaims with illimitable gesture. Verville stands stolid, stationary. Occasionally in tense moments, he raises his right hand or sweeps the chamber with his arm, and the accent of Mother France steals back into his clear English pronunciation. What a strange, freakish creature Dame Nature is at times ! Surely little, vivacious, dynamic Studholme should have been the Gaul, and quiet, steady, plain-spoken Verville the Asquith-like Yorkshireman.

Labor men — and other people, too— have learned a lot of things about this plumber - politician. For one thing, he’s honest. He believes in his cause, and makes it manifest not in words alone, but in actions. His head is clear. He is no coiner of elegant phrases. His are simple, forceful words which permit no mistaking their meaning. His heart is kind—what man succeeds who lacks kindness of heart? His courage stands the acid test when trial comes.

What do the coming years hold for Verville? Politics is not the sphere for the prognosticator. It’s too uncertain and dangerous. Yet—and yet—there are

those bold enough to undertake to interpret the future.

Of course politicians consider other

things than fitness., And the idea that a labor man, out-and-out, whose Liberalism is strongly independent in character rather than of the clear-cut party color, might not suit the Liberal politicians. Again, there is the possibility that the man himself might not be willing to give up his place as the untrammelled representative of the men of toil to become advisor to His Majesty in a party ministry. At any rate it would be safe to assume that he would not care much about the “Honorable.” He would prefer to remain just plain Alphonse Verville. 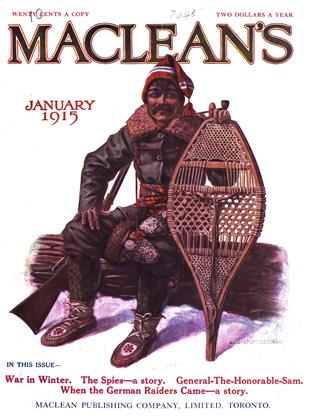