Editor’s Note—Mr. Appleton contends that the sentiment of ease and of greater security in the money markets is preliminary to an improvement in industrial conditions. Already there are signs of business reorganization on a safer and better basis than Canada has had for some time. He gives some instances of compositions between creditors and debtors which illustrate the character of the reorganization that is going on at the present time. For the time being, however, as Mr. Appleton pointed out over a month ago, business trill have to rely upon the dwellers in rural communities whose produce is commanding higher and higher prices. If amongst the farmers business is below par the fault can only be laid at the door of our own industry.

MANUFACTURERS and business men are prone to belittle the significance of security and money markets as an index to business. There are notable exceptions, of course. What we say, however, is true of the bulk. It will be found, however, that before any industrial revival will take place there will be a greater confidence and activity in the security market. Before Canadian factories begin to hum there will be a demand for Canadian securities. Previous to any great improvement in trade there must be confidence and confidence first expresses itself in stock market terms. The holder of a share or a bond of the best industrial is a proprietor of that industrial and just as soon as these holders are convinced that the outlook is clear they will put a higher price on their property. That higher price will be expressed clearly and distinctly in the stock market.

The business community and the financial system which it has built up has been more frightened than hurt. At the moment of writing there are many signs that business is re-organizing itself on a better and sounder basis. There are occurring daily many compositions between creditors and debtors and many assignments are taking place. This is not necessarily a sign of further commercial depression. On the other hand it may properly be taken as an indication that business is reorganizing itself. My attention was drawn to the case of one small trader. By those who have dealt with him for some years he was regarded as being reliable. He was, however, compelled to assign under these circumstances; he had a liability of say §5.000, stock on hand was valued at §4,000, book debts §10,000. The latter was good inasmuch as every article sold was covered by a lien. Nevertheless his creditors were pressing him and to be just to all of them he had to assign.

Another case of a similar character was instanced to the writer. A commission house had liabilities of approximately §40,000. It had stock on hand of say $30,000. Its book debts were approxi-

mately $45,000. With so large a surph it was compelled to compromise with i creditors. Its first step when the w¡ broke out and when subjected to pressu from its bank, was to ask the creditors grant an extension. This was agreed except in the case of one creditor. T1 latter refused to give the extension. T1 creditor who refused to agree to the e tension needed cash and was eventual induced along with the other creditors accept 50c on the dollar. This particul: firm placed itself on an excellent basis this way. It would no doubt have pa every cent of its indebtedness if the crec tois had agreed upon an extension. Rath than take the stock and liquidate the bu: ness the creditors agreed to accept 50c ijj the dollar.

These are types of reorganization th are taking place at the present tin Many assignments under circumstance similar to those related show assets to eiceed by a substantial margin the liabilil. The fact, therefore, that many assignants are reported and that creditors a in conference with debtors, does not imcate that business is going to be wor:, Rather the opposite will result. Airea ' many factories under new arrangemer; with their creditors, and many stoikeepers also, are proceeding to do bu -ness as usual.

Even in the West which has bei pointed to too frequently as being tí home of business decrepitude, is begning to feel the effect of business impro'ment. Conditions in the rural commu -ties of the West are not as good as thr are in other parts af Canada. If, the -fore, signs in the West are hopeful th? should be specially so in the East. T p West has relied upon its cereal produ.s very largely although during the p.l year the amount of other products shipjä out shows a very satisfactory improment.

At the present moment therefore B have two very hopeful factors in businei. Better and saner arrangements are beir made between creditors and debtors al there is in prospect a season of eay money.

While the money markets are proming in so far as the wants of Canada it concerned, and our productive machinty is stimulated by the extraordinary hii prices, there is little justification for p -simism. In the rural communities thee can be no legitimate excuse for legitinne business on a scale less than in any otlî year. If the farmer cannot pay his delp and provide himself with comforts tc| greater extent than is usual there is southing radically wrong with the county and its people. As to the quality andO tent of our soil and our pastures theres no question. We have also the climat These facts are scientifically determ jf able. If our business, therefore, is belli par, that is in our rural districts, it is te fault of the people either in respect f ; their system of doing business or thif I industry. 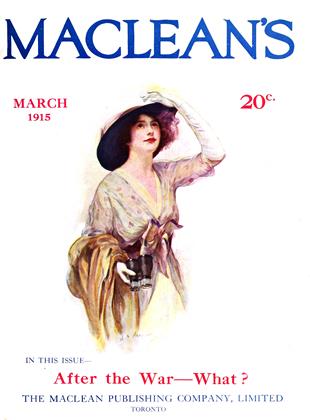