I HAVE only one regret in presenting this brief sketch of Mrs. McLagan— that is, my editor refuses to allow me space for a serial, a romantic serial such as would make the Williamson green with envy, the Askews and Harold Macgrath sigh for new worlds to conquer, and the moving picture people scramble themselves to death in their efforts to secure the rights! In their telling lingo—every move’s a picture; there’s a punch in every reel; the action never lags!

Sara Madure, eldest daughter of John and Martha McIntyre Madure, was born near Belfast, Ireland. Her father, a civil engineer, was engaged in Government survey work there until 1858, when he answered the call for volunteers to join the Royal Engineers and go to British Columbia. Not being able to wait until arrangements for the family’s moving were completed, the husband left his wife to follow him to the new country, bringing her two babies—Sara, aged three years, and an infant, aged three months. They embarked at Liverpool, on an old sailing vessel, and spent a mere matter of six months getting to Victoria, rounding Cape Horn, amongst other perilous undertakings, and seeing old Father Neptune in all his variable moods. Arrived at New Westminster, Mrs. Madure found only •. tents provided for the families of’ the engineers — until'houses could be built! Nevertheless, they were on land, and one imagines that anything stationary looks like home, after half a year on the ocean.

It would appear that the Maclures craved solitude, for after a few years of metropolitan pleasures in New Westminster, they removed to a homestead on the Matsqui Prairie— forty miles from the nearest city," and seventeen from a neighbor. ,

All communication with the outside worFd was not severed, however, for Mr. Madure was placed in charge of the Collins Overland Telegraph Company, with the office in his home. This being the case, “I was able to gain sufficient knowledge.” said Mrs. McLagan to a friend, “without much trouble, to report all business for British Columbia coming via the Western Union lines.”

She was thirteen years old at the time!

“All business” included press despatches, which were particularly heavy during the Franco-Prussian War. One of her duties was to

compile from the regular despatches sufficient wqr news to forward each day to a small daily published in Caribou.

I think you will grant me a “move” in this pieture-^tnat of a little girl thirteen years old, receiving despatches and sorting them over for suitable news for a daily paper!

Enter the Superintendent. He gives tfie little girl, only very slightly larger, ^tfnarge of all the offices from New Westminster to Caribou. Her duties now require her to test the wire every morning. . besides the handling of men; she must send repairers out whenever needed. During the construction of the C.P.R. she was asked to take over the Yale office; it was difficult to,get responsible operators in those days for a business which grew so rapidly that it reminded one of the country youth and his shrinking trousers. So young Sara Madure took charge of thç Yale office. Soon after* the reporting office was moved to New Westminster and the little operator moved with it—now a» the manager of the Victoria office, under

the Dominion Government, with Mr. Gisborne. of Ottawa, as superintendent.

In 1884 the manager resigned to marri Mr. J. C. McLagan. editor and manager of the Victoria Times. He was also the founder of the first evening paper published in Vancouver. {"The World," 188K. \

During her husband’s lifetime, Mrs. McLagan took no active part on the pa per—with the exception of reading the exchanges and clipping a weekly page, which was of great interest to women and deeply appreciated by the country people. After such a life as she had spent, the mere managing of a home, the rearing of a family, and the clipping of a weekly page, certainly made her feel idle! It was she who used the word inactive— not I !

In April, 1901, Mr. McLagan succumbed to a protracted illness—and the following extract will serve to show what esteem the public felt for him and his wife:—

“ * * * He left a splendid record of public achievement and it was his death which necessitated Mrs. McLagan’s complete mergence into public life, as the first woman editor in Canada, of a daily paper. For four strerruou« years * * * she followed the dictates of a high ideal as to educative and regulative force a paper should strive to exert for the good of the community, and she maintained the high standard her husband set, despite the opposition of reporters who were imbued with the modern craving for sensationalism at all hazard. To prevent unauthorized copy from finding its way surreptitiously into the paper, Mrs. McLagan exercised a rigorous censorship as proofreader, and in this manner ran counter to an in ternational law for the employment of a Union worker. Although stiff opposition faced her, she held ‘her ground and finally had the satisfaction of seeing the regulation so amende«! as to exempt owners of newspapers. . . .”

Speaking of her necessity to take over the management of the paper. Mrs. McLagan says: “Except for a loyal staff and an appreciative general public, I could never have succeeded.”

In 1905 such tempting inducements for the disposal of the paper were offered, that the editor felt constrained to accept them, reluctantly giving up the work she had Icarie«! to love, notwithstanding long hours of slaving and many hardships.

Her first philanthropic venture on a large scale was assisting in founding the Vancouver Y.M.C.A

This was in 1888 — when Vancouver was not the place it is to-day. The \ .W.C.A. followed, of which Mrs. McLagan was secretary for several years. She was one of a committee of five to organize the Art Historical Association, and is an honorary life member of the same. She was also president of the Local Council of Women for three years, and Provincial President for two. during which she succeeded in organizing the New Westminster Council—one of the largest in British Columbia. She was also accorded the honor of being the first B.C. representative at a national meeting (of the Council) held in Toronto; and soon after this she assisted in establishing the Victorian Order of Nurses in Vancouver, acting as secretary for three years. During her office, two members of the X. O. N. were sent to the Yukon under escort of the R.N.M.P., and a public reception was given them when they passed through Vancouver, at the residence of the secretary. It was a festive occasion, truly! attended by the R.N.M.P. officers and many of the local mititia, city officials, and other prominent persons. And surely the memory of that glorious send-off must have been sweet to the two women who put for the time, home and home ties far from them.

Some years later—secretaryships being thrust upon her—Mr9. McLagan was urged to hold that post for the Daughters of the Empire.

After her father’s death she returned to her childhood’s home, Hazelbrae, where she spent five years in farming. Then she made another move—to Kilgard, her present home, where she is interested with her son and other members of the family, in the manufacture of pressed brick, sewer piping, etc.

In her youth, and later, her chief hobby, her recreation, has been—guess! Stocks? No! Other forms of gambling and speculation? No! Something vigorous and exciting, I’ll be bound? No! Gardening!

She has few greater delights than rambling through the woods in which so many exquisite wild things grow, secluded and sequestered from the rush of evolving nations, and she loves nothing better than the cultivation of these same untended flowers.

Of her personal charm I have purposely said nothing. If you cannot feel it in every undertaking, if you cannot see it in this life so full of achieving things— then I have failed in my sketch, utterly. And, just a moment! Doesn’t it make you feel inordinately lazy? 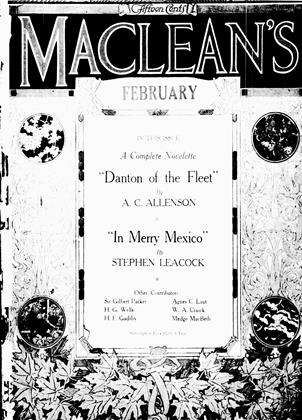